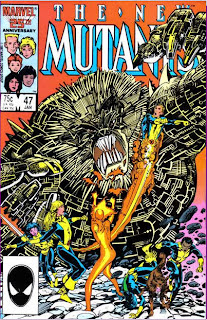 "My Heart for the Highlands"
January 1987

In a Nutshell
The New Mutants meet Robert the Bruce.

Plot
In Limbo, to which Illyana teleported the team to escape Magus, Roberto wakes up to discover the rest of his friends unconscious. Suddenly, a group of demons arrives and carries Illyana away. He follows them and prepares to rescue Illyana when it appears the demons are going to kill her, but S'ym appears and explains to Roberto that the demons are merely casting a spell to revive Illyana. Sure enough, she soon wakes up, then revives the rest of the team. They discuss the situation, and Warlock offers to sacrifice himself to Magus to save everyone else, but everyone agrees to stand by him. Just then, Magus appears, having tracked the New Mutants to Limbo. They quickly find their powers are no match for him, but Karma manages to possess him long enough for Illyana to blindly teleport everyone out of Limbo. 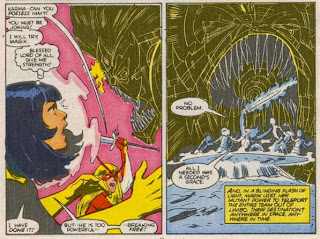 Meanwhile, back at the mansion, Moira and Magneto discuss the missing New Mutants, with Magneto insisting they're still alive. At that moment, the New Mutants suddenly arrive in Scotland, in the midst of a pitched battle between men on horseback. Drawn into the battle, they end up helping Robert the Bruce, leader of the Scots fighting for their independence from England, defeat a group of English soldiers. A grateful Robert brings the New Mutants back to his castle, where he offers them sanctuary. However, the New Mutants realize that if Magus followed them to Limbo, he could follow them here, and they are unwilling to endanger either Robert or history. Roberto volunteers to check and see if Limbo is safe to travel through, but Warlock insists it his responsibility to check, in case Magus is waiting for him. However, he quickly declares Limbo safe, and after Rahne and Robert exchange gifts, the New Mutants return to Limbo, inspired by Robert to fight Magus despite the odds against them.

Firsts and Other Notables
The New Mutants meet Robert the Bruce, the Scottish king who successfully led the Scottish rebellion at the Battle of Bannockburn in 1314 to defeat the British, ultimately wining independence for Scotland, in this issue. 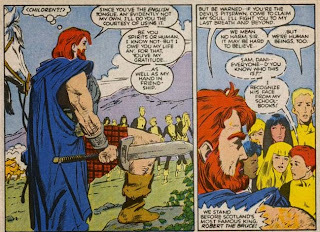 Magus tracks the New Mutants to Limbo, and upon his arrival, starts infecting demons with the Transmode Virus. This will lead to much of Limbo being similarly infected, which will play a significant role in the future "Inferno" crossover.

A Work in Progress
Illyana notes that lately all the spells she casts in Limbo come with a demonic twist.

Attempting to lift Warlock's spirits, Dani notes that the Cheyenne are used to winning hopeless fights, while Sam agrees with her, saying his ancestors fought for the Confederacy. 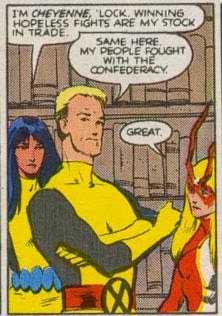 When Dani pulls an image of Magus' greatest fear from his mind, it's Warlock. 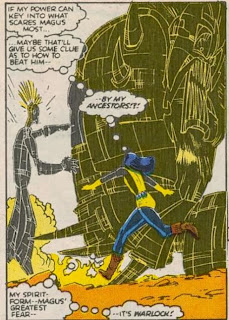 While Moira fears that the missing New Mutants are dead, Magneto insists they are not, pointing out that Brightwind's link to Dani seemingly remains intact, and saying that he's learned the value of hope. 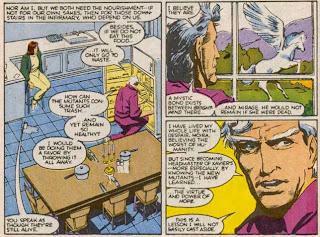 When Warlock returns to Limbo to check if Magus is gone, Illyana notes that all their problems will be solved if Magus is waiting for Warlock, something which appalls even Roberto. 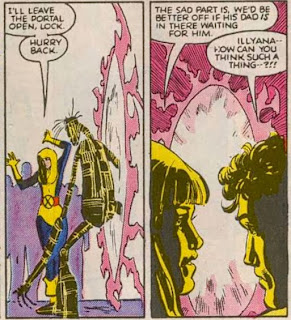 My Hero, Thomas Magnum
In trying to decide how to rescue Illyana, Roberto wonders what Thomas Magnum would do.

Teebore's Take
So this is the issue where the New Mutants travel back in time and make friends with Robert the Bruce. It's...well, it's pretty ridiculous, though Claremont does play it mostly straight, using Robert as an inspiration figure for the New Mutants, drawing a comparison between the overwhelming odds facing him in his fight against the English and the New Mutants similar sentiments regarding Magus. And, to his credit, Claremont avoids turning this into an issue of Marvel Team-Up featuring Robert the Bruce, as the New Mutants fight some Englishmen but don't help win Robert his country or anything like that.

Still, it's all a bit twee (and Robert is a rather esoteric choice for a historic figure facing large odds against him; how many non-Scots reading this issue prior to Braveheart were familiar with Robert the Bruce? Heck, how many readers post-Braveheart are?), especially when juxtaposed against both the contemporaneous events in X-Men and X-Factor (which are still dealing with the fallout of the massacre) and the threat of Magus looming over the characters. Given the structure of the ensuing story and the eventual importance of Magus invading Limbo, it seems like Claremont needed to fill half an issue, and came up with this. And while there are worse ways to pad out a story, it's hard to get too excited about it.

Next Issue
Tomorrow, X-Factor continues to deal with massacre fallout in X-Factor #11, and next week, more Sabretooth and Wolverine action in Uncanny X-Men #213, followed by another temporal jaunt for the New Mutants in New Mutants #48.
Newer Post Older Post Home
Posted by Austin Gorton at 12:00 PM