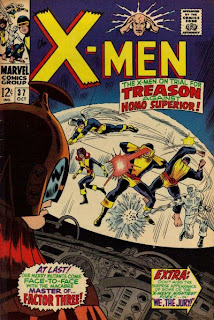 In a nutshell: Factor Three puts the X-Men on trial for crimes against mutants.

Plot
The X-Men are en route to Factor Three's base in Europe when Changeling sends a Magno-Disk to attack their plane. In order to spare the other passengers, the X-Men bail out, and they manage to destroy the Magno-Disk and land safely. On the ground, the X-Men are attacked by Factor Three androids and herded into a valley filled with sleeping gas.

The X-Men awaken, captive inside Factor Three's base. The Changeling announces that the X-Men are being put on trial for crimes against mutants. He will serve as prosecutor, with the other members of Factor Three, past X-Men villains Vanisher, Blob, Unus and Mastermind serving as the jury and Factor Three's leader, the Mutant Master, presiding over the "courtroom" as the judge. The "jury" retells their past defeats at the hands of the X-Men and find the team guilty. Before handing down the sentence, Mutant Master explains his plan: to trigger a global nuclear war between the United States and the Soviet Union that will wipe out mankind and allow mutants, led by Factor Three to inherit the Earth. He then sentences the X-Men to have their wills sapped by his Oblivio-Ray so that they live out their days as Factor Three's obedient slaves.

Before getting hit with the ray, Iceman manages to use his power to short out the X-Men's restraints and the team escapes from where they are being held. After defeating a robotic guard, they discover that Factor Three has abandoned the base. The X-Men have less than hour to escape from the base, locate Factor Three's agents worldwide, and avert a nuclear war.

Firsts and Other Notables
Factor Three, as a group, revealed to consist of Blob, Unus, Vanisher and Mastermind as well as Changeling, appears fully for the first time. This is also the first appearance of their leader, the Mutant Master.

Though still not great, the art, with Don Heck on inks, is much better this issue. Heck will move from inking to penciling next issue.

A Work in Progress
Factor Three's master plan is revealed: to trigger a nuclear war between the USA and the USSR that will allow mutants to rise to power. Factor Three is so named because they represent a third factor aside from the East and West. Changeling is revealed to be the second-in-command of the group. 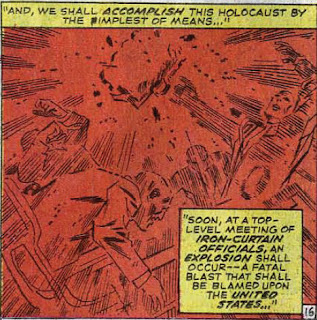 Mastermind, who was last seen turned to stone by the Stranger in issue #11, simply says that he got better. 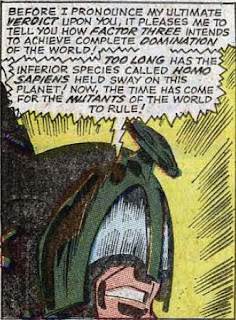 "In the best traditions of western jurisprudence, you shall receive a fair trial, with all evidence duly weighed.  And then you shall be destroyed!" That's just classic comic book villain-y.

After jumping out of the plane, the X-Men spend four pages fighting off Factor Three's Magno-Disk and finding a safe way to land before they (safely) hit the ground. To be fair, someone realized that represents a ridiculous amount of time for people to be falling through the air, and an editorial caption explains that the events depicted all occurred within several seconds.

Cyclops tries to con Changeling into revealing his mutant power. Um, his name is Changeling; take a wild guess, Scott. 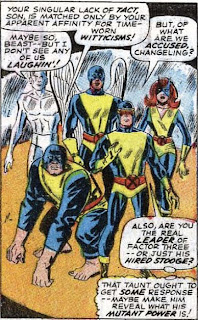 The Mutant Master's will-sapping ray gun is called the Oblivio-Ray. That is, perhaps, the most Silver Age-y sentence ever to appear in this series of posts, which is saying something.

The Awesome and Terrible Power of Cyclops
While falling out of the plane, Cyclops manages to get his glasses knocked off, which promptly triggers a hissy fit. 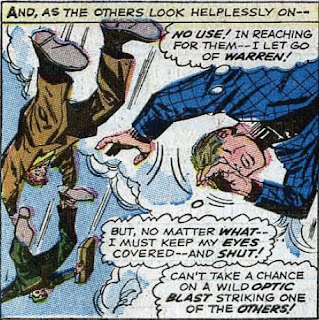 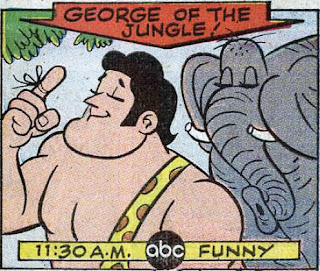 It's in the Mail
Perhaps the first "why doesn't Cyclops wear contact lenses?" query. 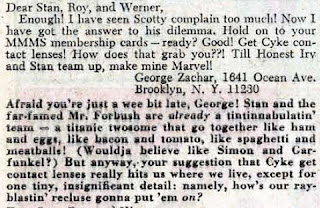 Teebore's Take
Factor Three finally takes center stage after simmering in the background for almost ten issues, a length of time that makes the story, by the standards of the times, damn near epic. Thomas rounds out his original creations for the team, Mutant Master (who we'll learn more about next issue) and Changeling, with a "greatest hits" cast of X-Men villains, basically calling on (after using Juggernaut earlier in this story a few issues ago) every remaining and available Lee/Kirby villain (Magneto and Toad are still prisoners of the Stranger, Quicksilver and Scarlet Witch, by this time, are reformed and members of the Avengers and Lucifer isn't worth remembering, though technically, he's currently banished in a nameless dimension).

This issue sets up a classic comic book yarn, with the heroes put on trial by their adversaries while fighting to avert world destruction and domination. However, the specifics of the story are deeply mired in the Silver Age, dependent as they are on the Cold War anxieties between the United States and the Soviet Union. Even Factor Three's very name is derived from a Cold War notion of dueling superpowers. While it certainly taps into the fears and the anxieties of the time in which it was published, the fact that this story is so heavily informed by a specific and dated socio-political climate is likely a main reason it remains neither highly-regarded nor well-remembered, even amongst aficionados of stories from this time.
Newer Post Older Post Home
Posted by Austin Gorton at 12:00 PM