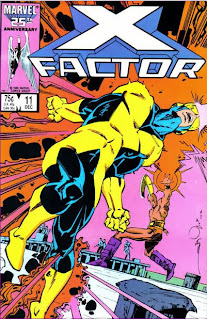 In a Nutshell
X-Factor tries to help a group of displaced Morlocks.

Plot
In the Morlock Tunnels, Beast and Iceman, having rescued Leech and Caliban, are attacked by a group of Morlocks called the Tunnelers, who believe them to be the Marauders. Elsewhere in the tunnels, Cyclops and Marvel Girl, along with Artie, are bringing the gravely-injured Angel back to their headquarters when they overhear the fight between their teammates and the Morlocks. The battle stops when the leader of theTunnelers, Berserker, recognizes X-Factor as the X-Terminators. Cyclops offer them sanctuary, and the group returns to X-Factor headquarters, where the Tunnelers quickly realize that the X-Terminators and X-Factor are one and the same. Even though the other rescued Morlocks vouch for X-Factor, the Tunnelers aren't convinced, and sneak out of the complex as Scott and Jean take Warren to the hospital. They reach the river and stop to decide their next move, but are confronted by a street gang. A fight breaks out between the two groups, with casaulties on both sides, but one of the gang members manages to call the police before Berserker strikes him down. 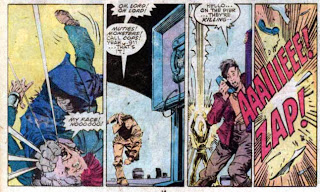 At the hospital, Scott and Jean are waiting for news on Warren's condition when they hear news reports of a pitched battle between the police and a small gang of mutants. Realizing it's the Tunnelers, they rush out to try and help the Morlocks. Elsewhere, Apocalypse appears before a paralyzed solider named Abraham Kieros, and offers to transform him into War, second Horseman of Apocalypse. Back in Manhattan, Cyclops and Marvel Girl arrive on the scene of the battle between the Tunnelers and the police. They attempt to stop the battle before anyone else gets hurt, but all the Morlocks save one, Masque, are ultimately killed. Solemnly, Cyclops and Marvel Girl leave to drop Masque at their headquarters before returning to the hospital. Elsewhere, at a loft near Times Square, Boom-Boom tells the Vanisher she'll no longer steal for him, and if he doesn't leave her alone, she'll call X-Factor on him. Back at the hospital, Scott and Jean are told by the doctor that in order for Warren to live, they'll have to amputate his wings.

Firsts and Other Notables
Hey, remember Boom-Boom? The sole reason we looked at the interminable Secret Wars II #5? Well, she's back, popping up in this issue as a member of a group of pickpockets and thieves, who are working for the now Fagin-esque Vanisher, the second evil mutant the X-Men ever faced, in X-Men #2, and whom we haven't seen since the Silver Age. He'll appear in a larger capacity next issue, then end up in the Fallen Angels miniseries before going back into hiding for awhile. 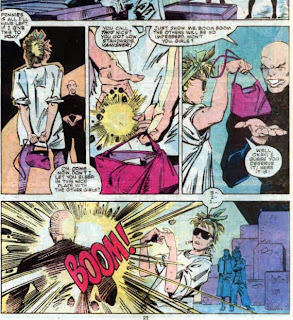 This issue introduces a new faction of Morlocks, the Tunnelers, a more angry, aggressive subgroup who turn down their noses at the Drain Dwellers (the faction that first appeared in Power Pack #12, many of whom were rescued by X-Factor and are now living at their headquarters). Their members include Berseker (manipulates EM energy), Scaleface (transforms into a large reptile) and Blow Hard (channels strong winds through his pipe), all of whom appear for the first time, then are killed, in this issue. The flesh-altering Masque, who has been a fixture of the Morlocks since their first appearance, is also revealed to be a Tunneler; he survives the events of this issue and is taken in by X-Factor. 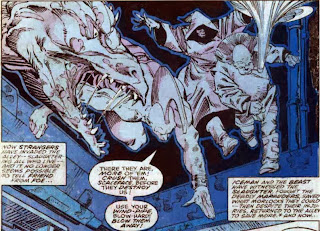 The energy wave triggered by Thor which scours clean the Morlock Tunnels is seen in this issue, as X-Factor and the Morlocks they've rescued just barely get to safety before it strikes them. 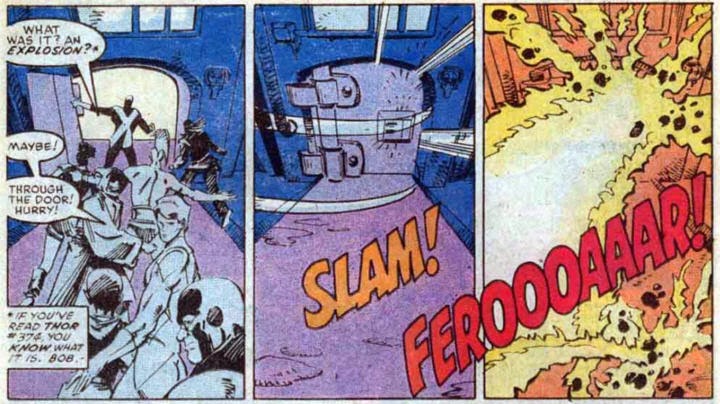 Caliban regains consciousness and, realizing that there are no more mutants left in the Morlock Tunnels, swears he will make the Marauders pay for wiping them out, a motivation which will inform much of his character arc for the next several years. 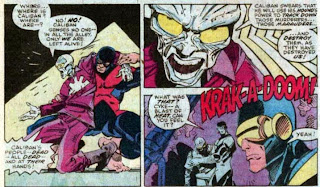 The fantastically-named Abraham Lincoln Kieros, a mutant with the power to trigger explosions but currently confined to an iron lung, makes his first appearance, when Apocalypse appears before him and offers to transform him into War, Apocalypse's second Horseman. 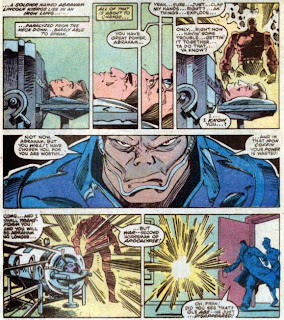 The Chronology Corner
This issue follows on directly from Thor #373, which has Thor rescuing Angel from the Marauders and the rest of X-Factor returning to the tunnels.

A Work in Progress
As the Tunnelers briefly consider whether the Marauders could be X-Factor, Cyclops learns that the connection between Angel and X-Factor has been made public.

In addition to Leech and Caliban, X-Factor has saved Drain Dwellers Erg, Tar Baby, Ape, Beautiful Dreamer and Skids (who is revealed to be a Drain Dweller in this issue).

Artistic Achivement
I've always really liked the levels of depth on this cover - at first glance, it just looks like an image of Cyclops getting blasted, but then you see Berserker behind him, and then Marvel Girl and others on the dock in the background behind him.

The Awesome and Terrible Power of Cyclops
Cyclops unintentionally kills Berserker when he blasts him into the water, which causes all the energy Berserker had stored up to explode out him. The death of Berseker and the other Tunnelers weights heavily on Cyclops, as he blames himself for convincing them to leave the tunnels, though Jean points out they had no other choice. 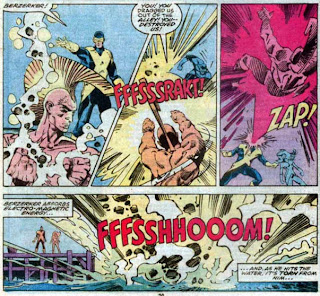 Young Love
Artie, attempting to tell Jean that Warren ultimately believes in the purpose of X-Factor, per his request, instead leads Scott to believe that Warren and Jean are in love. 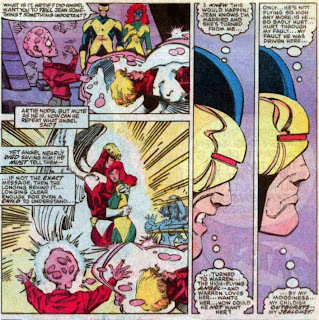 Human/Mutant Relations
During the battle between the police and the Tunnelers, one cop argues with another that not all mutants are automatically bad, while Scaleface tries to convince Berserker the cops are just protecting their territory the same way the Morlocks did their tunnels. 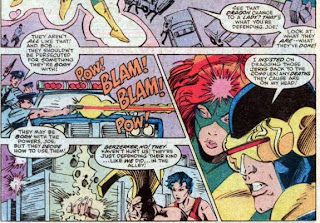 Teebore's Take
Of all the chapters of "Mutant Massacre", this one possibly suffers the most from not reading the tie-ins, in order. Where last issue ended with Angel, alone in the tunnels, crippled by the Marauders, this issue opens with the rest of X-Factor bringing the injured Angel back to headquarters, along with Artie, Leech and Caliban, the immediate aftermath of the attack on Angel and the rescue of the character that spurned it having been relegated to a tie-in issue of Thor. It's a disconcerting start to the issue, and it saps much of the shock and momentum established by the end of the previous one.

It also doesn't help that, as with X-Men #212, we're firmly in the "falling action" portion of the story after only one issue. No Marauders appear in this issue, the conflict relegated to a group of Morlocks who don't trust X-Factor and strike out on their own. Simonson instead uses the events of the massacre to push forward with her continuing evolution of the title: there's ever more relationship angst, X-Factor's charges (and thus the book's supporting cast) have increased in number, the Apocalypse subplot is teased again, the obligatory action-based conflict is built around the conflict at the heart of the book's premise, and next issue's story is setup with the reintroduction of Boom-Boom. None of this is bad, and fits right in with Simonson's "let's throw a ton of balls into the air" approach to the title. It's just a shame that the atmosphere and intensity of the previous issue has deflated so quickly.