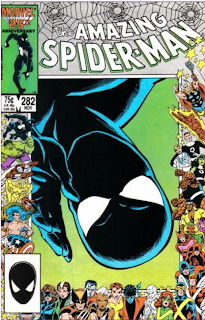 In a Nutshell
X-Factor is hired to capture Spider-Man.

Plot
After seeing their commercial on TV, Daily Bugle publisher J. Jonah Jameson decides to hire X-Factor to capture Spider-Man, over the objections of his Editor-in-Chief, Robbie Robertson. X-Factor meets with Jameson and takes the job, though they tell Jameson they aren't certain that Spider-Man is a mutant. As the X-Terminators, X-Factor tries to locate Spider-Man in order to "warn" him that X-Factor is after him. However, a fight breaks out between a suspicious Spider-Man and the X-Terminators, one which ends only when the weakened Spider-Man is knocked unconscious. As Iceman watches over Spider-Man, the rest of the team returns to Jameson and tells him they've determined Spider-Man is not a mutant, and thus outside their purview. When Spider-Man awakens, Iceman offers to help Spider-Man, but he declines, saying that when he takes off his mask, he's just a regular Joe. Iceman wishes him well, pointing out that the two of them aren't so different, as the public will always fear and distrust them both.

Firsts and Other Notables
This issue represents X-Factor's first guest appearance in the regular issue of another comic (they previously guest-starred in an Iron Man annual). Curiously enough, this issue is inked by series creator Bob Layton.

Published with a cover date of November 1986, this issue is part of Marvel's 25th Anniversary celebration, and features the according frame and portrait cover design.

Pencils in this issue come from Rick Leonardi, whose work at this point is quite familiar to most readers of the X-books.

Anyone interested in how this issue fits in regards to Spider-Man's ongoing story (it ties in with the larger Flash Thompson/Hobgoblin story and Spidey's latest declaration that he'll soon quit being Spider-Man), check out this post on the Chasing Amazing blog by Mark Ginocchio (in fact, if you're a Spider-Man fan and haven't checked out Mark's blog, you definitely should. Good stuff).

The Chronology Corner
This story takes place between X-Factor #7 and #8.

A Work in Progress
At this point, it is commonly known (amongst readers, Spider-Man, and the X-Men) that Spider-Man is not a mutant, something which X-Factor quickly points when they receive Jameson's offer. 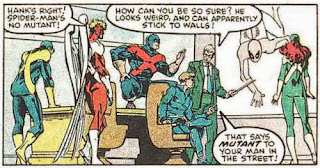 Spider-Man is at this time wearing a cloth replica of the black costume he attained during Secret Wars, having since learned that the original costume was an alien symbiote. 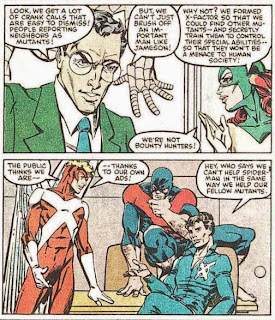 In one of those touches that I love, for the way it makes Jameson a more rounded character, Robbie quickly susses out that Jameson is planning on skewering X-Factor in the press whether they succeed or fail.

Meanwhile, Robbie has his own reservations about X-Factor, comparing what they do to earlier attempts by other groups to hunt down African-Americans and Jewish people.

Spider-Man, having met him before and living in a world where he's a public figure, immediately recognizes Angel. 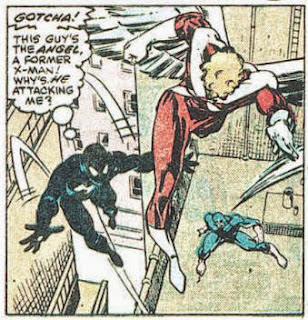 I Love the 80s
The numbered maneuvers are back!

Human/Mutant Relations
Parting ways with Spider-Man, Iceman notes that they both have a lot in common, as both the X-Men and Spider-Man constantly face fear and mistrust despite their good deeds.

Teebore's Take
This is an odd little crossover for X-Factor. Presumably, the idea is to slot the characters into an issue of Amazing Spider-Man (one of Marvel's best selling books) in order to boost the profile of the newer book, and as a result, hook new readers. Yet at the time this was published, X-Factor is in a state of flux, with a new writer doing her best to intelligently dismantle the initial premise of the book, a premise which, theoretically, would be used in a guest appearance to sell the title to new readers. Yet any readers drawn by that premise to the book would arrive to find something very different from what initially hooked them, as X-Factor is the midst of the Mutant Massacre storyline and will see its "mutant hunters" premise come under even more scrutiny quickly thereafter.

So as a sales vehicle for X-Factor, this issue seems hobbled right out of the gate (I'd guess it was conceived prior to Layton's departure, though DeFalco does show a pretty solid grasp of all the problems inherent to the premise, so he was either coached by Simonson or they were just more apparent to him than they ever were to Layton). As a story, this is perfectly cromulent fare, the kind of standard crossover issue that finds the two heroes fighting each other over a misunderstanding, though Jameson's characterization helps elevate some of the X-Factor material above the standard. 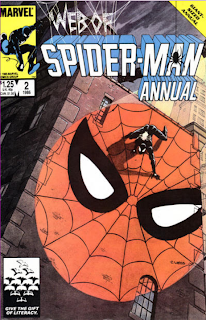 In a Nutshell
Warlock goes into the city to gain experience with real life.

Plot
Warlock is admonished by the New Mutants for watching too much TV, so he sets out for New York City to experience real life. In the city, he encounters two scientists, Dr. Karl and Reni Weber. Karl asks Warlock for a sample of his body, believing the living circuitry will make him rich and famous, but when Karl's experiments result in Warlock absorbing too much energy too fast, he goes berserk, capturing Reni and rampaging through the city. He draws the attention of Spider-Man, who is unable to stop him, but Spider-Man is able to convince Karl to return the piece of Warlock he took, as Karl realizes Warlock is a person, not a thing to be exploited. With Warlock whole again, he blasts himself into the atmosphere, exploding all the excess energy he absorbed, then returns to Earth. After seeing an editorial biased against Spider-Man, however, he swears off TV for good.

Firsts and Other Notables
Art Adams, inking himself, pencils this issue.

The Chronology Corner
The Marvel Chronology Project lists this issue as occurring between New Mutants #42 and #43, as Roberto isn't present amongst the New Mutants (placing it before his return in issue #43). As Rahne is present in this issue, it suggests she didn't immediately leave for Scotland after being healed by the White Queen and Magneto in issue #40, but rather returned to the mansion for a bit (something which isn't explicitly contradicted anywhere else, as its never made clear exactly when she left for Muir Isle).

A Work in Progress
Not surprisingly, when Warlock wakes up the New Mutants in the middle of the night, Illyana's nighttime attire is the skimpiest. 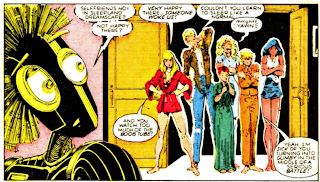 When Warlock runs into Spider-Man, he references himself as "Sam's friend", as Spider-Man and Cannonball met (and teamed up, natch) in Marvel Team-Up #149, and Spider-Man refers to the New Mutants as "baby X-Men". 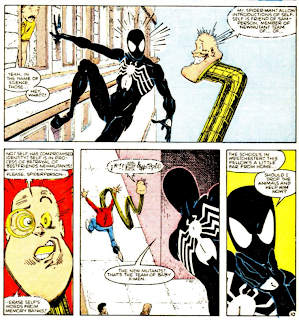 I Love the 80s
In the course of this issue, Warlock transforms himself into Speed Racer... 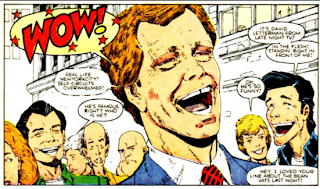 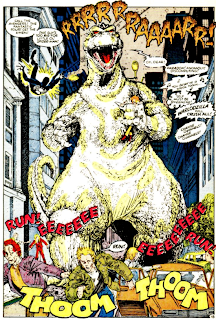 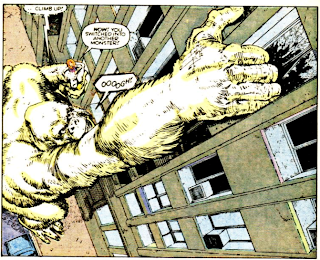 Teebore's Take
Story-wise, this is standard Nocenti material (superhero antics layered over a social or political message, in this case, animal testing/scientific ethics) with some Warlock wackiness thrown in (the rest of the New Mutants appear only to bookend the issue). The real draw here, even moreso than in the other annuals we've looked at this week, is the art, as its a real treat to see Adams drawing Spider-Man, and nobody (besides Sienkiewicz, his creator) draws Warlock as well as Adams. However hamfisted (though sincere) the moral of the story may be, as tiresome as Warlock's naivete and "selfthis" and "selfthat" schtick may be, it all goes down a lot smoother thanks to Adams' art. Drawn by anyone else, this issue would be a chore. As is, it's a pleasant enough diversion, which makes it better than most of what shows up in annuals.