This review comes courtesy of Patreon supporter Scott Church. After supporting the site at the "Extraordinary" level for twelve months, he chose these issues for review. To get the chance to pick your own issue for review, and support the site, become a Patron here.

In a Nutshell
The X-Men battle Mr. Sinister over control of a new mutant

Plot
The X-Men arrive at a football stadium in Dallas, Texas, where a young player named Derrick Beacon's mutant power is manifesting for the first time. The X-Men try to help him control his power, but this leaves them open to attack by Mr. Sinister, who manages to knock out all the X-Men, save Jubilee. With the X-Men captive, Mr. Sinister tries to convince Beacon to join his efforts at bringing about mutant supremacy, but while Iceman taunts Sinister, Jubilee convinces Beacon to help free the X-Men, after which Mr. Sinister teleports away, defeated. The X-Men proceed to offer Beacon a place at Xavier's School for Gifted Youngsters, but he declines, opting instead to finish high school & go to college.

Firsts and Other Notables
These two issues were published as minicomics, packaged with a pair of VHS tapes featuring episodes of the X-Men animated series, available only through Pizza Hut. While Pizza Hut is today mostly known as the home of fantastic breadsticks and garbage pizza, back in the late 80s and early 90s it was also the home of some fun & unique multimedia tie-ins to stuff like the Teenage Mutant Ninja Turtles (naturally), the Rocketeer, and X-Men, presumably driven in large part by the excess of kids being pushed into the chain via their "Book It" reading program, which rewarded kids for reading books with Pizza Hut's signature kid-friendly personal pan pizzas (as a nerdy kid who loved to read, let me just say, I ate a ton of free pizza back in the day, and turning reading into a competitive activity did wonders for my self esteem, if not my cholesterol). 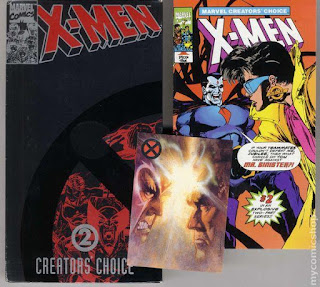 In addition to episodes of the animated series (at a time when home media collections of kids cartoons were still stupid expensive and spottily available), the videos packaged with these comics featured round table interviews with creators like Stan Lee, Scott Lobdell, and Fabian Nicieza, part of the brief "rock star-ification" of comic book creators which occurred in the midst of the early 90s speculator boom (of which Rob Liefeld's infamous 501 Jeans commercial is, perhaps, the signature item). Text excerpts of those interviews are included in the comics. 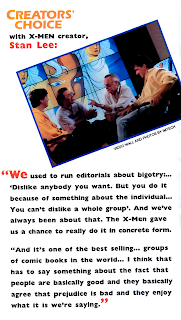 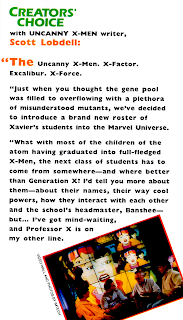 The packages also feature a fold out poster and trading card (which share the same image, a different one for each issue/pack), featuring art from Bill Sienkiewicz, who also draws the covers of both issues (I had the original X-Men on the bulletin board in my bedroom for years). 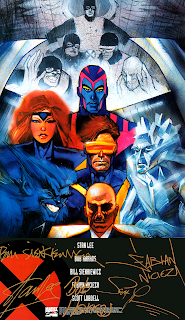 These Pizza Hut X-Men comics are not to be confused with the later four issue "Collectors Editions" series of promotional issues that were also released via Pizza Hut in 1993 (I will review those eventually as well, as part of Scott's Patreon selection), or the Pizza Hut "Real Heroes" from 1994 issues that functioned more like comic book PSAs as various Marvel heroes (including some X-Men) teamed up to tackle different topical issues in each issue (jury is still out as to whether or not I'll review those).

This issue introduces a new mutant named (Derrick) Beacon, who has the ability to create "bio-centric gels"; like most characters introduced in these kinds of comics, this represents his only appearance to date. 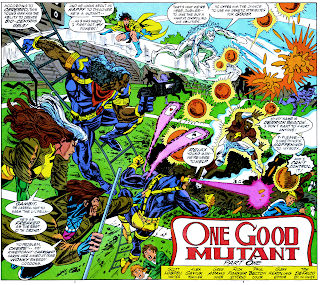 Mr. Sinister serves as the villain of this story, presumably due to his role as the central villain of the animated season's second season, which was airing around the time this promotion was running.

A Work in Progress
The group of X-Men in this story consist of Cyclops, Bishop, Rogue, Gambit, Iceman and Jubilee; the inclusion of Bishop & Iceman are curious, considering they weren't regular members of the animated series cast.

Jubilee is referred to as not yet being a full-fledged member of the team. 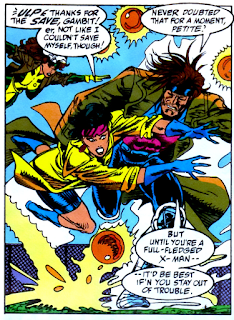 Sinister says his goal is to make mutants masters over humans, which really hasn't been his MO much elsewhere. 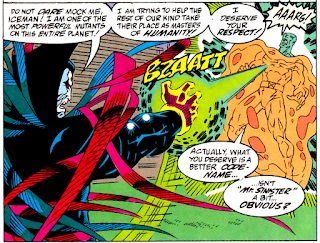 The Grim 'n' Gritty 90s
Beacon is rocking a pretty 90s half shirt/jersey.

Human/Mutant Relations
Jubilee says if they don’t save the bystanders, there’ll be no one to fear and hate the X-Men. 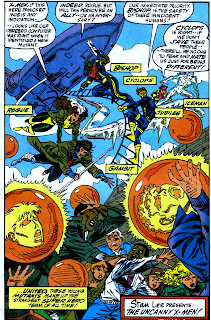 Beacon says his friends hate him now for being a mutant. 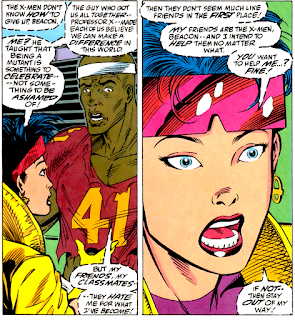 Austin's Analysis
So obviously the standards of a mass market promotional comic book like this are pretty different than those applied to regular issue: the goal is to hit the broadest possible audience with the hook and themes of the "main" stuff as bluntly & attractively as possible. These two issues certainly manage "blunt", with the characters making sure readers know the X-Men are sworn to protect a world which fears and hates them on nearly every page of the first issue. Doing that attractively, it's maybe less successful. Alex Saviuk is a fine artist and from a storytelling perspective, the first issue is easy enough to follow. But it's also not terribly exciting, with the limited page count resulting in tiny, cramped panels that were small even when reading this on an iPad (let alone in its original minicomic form). Ron Lim on the second issue, while also not the flashiest of artists, does at least have a animation-esque style closer to what new readers might recognize from the animated series episodes accompanying these issues.

Plot-wise, too, this gets the job done as well, telling the kind of story that the X-Men should theoretically be doing relatively often (learning of a new mutant via Cerebro and seeking that mutant out for training & guidance), but which they usually end up mostly doing only in stories like this one, presented via promotional material or in outside-media adaptations, moreso than in actual X-Men comics. It is interesting to see Scott Lobdell, already an established voice in the X-Universe at this time, broaden his scripting to accommodate the theoretically newer and larger audience. It is by no means sparkling dialogue or even of a piece with his contemporaneous X-book work, but rather than bring in a random editor from the licensing department to script the story, it is kind of fun to see Lobdell try his hand at a sort of "base level" depiction of these characters, even if the end result is a pair of issues more entertaining as a marketing curiosity of their time than on their own merits.