X-aminations is a series of posts written with the goal of examining each and every issue of Marvel Comics X-Men and its various spin-off titles. Currently, a new post in the series will appear every Wednesday (Uncanny X-Men alternating with X-Men (vol. 2)), Thursday (X-Factor alternating with X-Force) and Friday (Wolverine alternating with Excalibur) around noon. New series will be rotated in as necessary, with the quarterly X-Men Unlimited and perennially-late Cable, when published, headlining a third week of reviews.

Part of the goal of this project is to get a feel for what it would be like to walk into a comic shop on a given month and pull these titles off the stands. Thus, issues are examined according to their on sale date, with the titles covered in a given two week period equating to what was on sale in a given month. Annuals, limited series, significant guest appearances and the like will be fit in where they can be, but the main titles will remain in their on-sale date groupings.

On sale dates come mostly from Mike's Amazing World of Comics, a fantastic website and resource you should check out if you haven't already. Matters of chronological appearances are usually determined by the Official Marvel Index and/or the Marvel Chronology Project, with occasional assistance from SuperMegaMonkey's Marvel Chronology project. Discrepancies/oddities/general notes on the matter of chronology will be discussed in the relevant issues' posts. 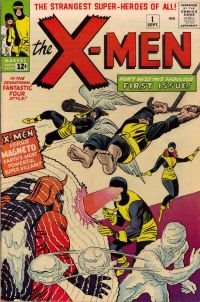 Want to start at the beginning? Here's the very first X-amination (of X-Men #1, of course). Click through from there to read all the reviews in order!

Retro X-aminations (reviews of issues I missed the first time around).

The "Non-Team" era of Uncanny X-Men