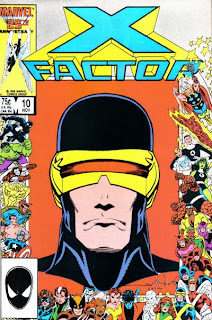 In a Nutshell
Angel is crippled by the Marauders.

Plot
As the Marauders begin slaughtering the Morlocks, X-Factor splits up, with Angel and Marvel Girl returning Skids and the injured Rusty to their headquarters while Cyclops, Beast and Iceman continue to search for Artie. They come across a group of Morlocks being chased by some Marauders, and manage to fight the villains off, though Beast is wounded in the process. As Angel and Marvel Girl return to their headquarters, they're greeted with the news that the press has learned about Angel's connection to X-Factor. Back in the tunnels, Artie, along with his new friends Leech and Caliban, are attacked by Sabretooth. Leech manages to hide in a small tunnel with Artie as Cyclops knocks out Sabretooth, but the hidden and mute Artie is unable to call out for Cyclops. X-Factor continues to rescue Morlocks from the Marauders, and Artie strikes out after them on his own. Back at X-Factor headquarters, Warren and Jean discuss the situation, and Jean wonders aloud how she can both love and hate Scott so much at the same. As Warren hugs Jean, Candy Southern walks in, having heard the news about X-Factor. Seeing Warren and Jean together, she angrily storms off, quitting her job and leaving Warren. 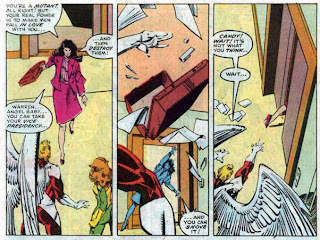 He contemplates chasing after her, but decides to go with Jean back into the tunnels to search for Artie and help their teammates. In the tunnels, Sabretooth is about to kill the Morlock Plague when Apocalypse suddenly appears, rescuing Plague and teleporting away with her, vowing to make her his first Horseman, Pestilence. Elsewhere, Cyclops, Beast and Iceman are overwhelmed by Arclight, Prism and Scrambler, but are saved by the timely arrival of Angel and Marvel Girl. With both Beast and Cyclops now injured, Marvel Girl and Iceman head back to headquarters with them and the other rescued Morlocks while Angel continues to search for Artie. He finds him just as they're confronted by Blockbuster, Harpoon and Vertigo. Telling Artie to run and not to stop no matter what he hears, Angel attacks the Marauders. However, he's no match for them, and Blockbuster quickly crushes the bones in Angel's wings before Harpoon impales him on the wall, a warning to any others who try to cross the Marauders.

Firsts and Other Notables
This issue ends with Angel, attempting to buy time for Artie to escape, confronting a group of Marauders, who proceed to break his wings and pin him to a wall, thus kicking off one of the title's most significant and impactful storylines and beginning Angel's transformation into Archangel. Angel being maimed by the Marauders stands as one of the more significant events of "Mutant Massacre", and the image of Angel pinned to the wall by Harpoon is also one of the more iconic images/panels in X-Men history. 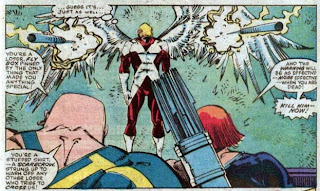 With this issue Walt Simonson comes aboard as the book's new regular penciller. At the time, he was coming off an acclaimed run as the writer and artist on Thor (and was  still writing the book, though he'd passed on the artistic duties to other creators) that saw him reinvigorate the title, creatively and commercially. Simonson's Thor is still considered one of the definitive runs on the title and a favorite of many. He is also the husband of Louise Simonson, making X-Factor one of the few occasions in which a husband and wife worked on the same book together.

Apocalypse also reappears, making his first appearance since his full debut in issue #6 to rescue the Morlock Plague from the Marauders, and offer her a place as his first Horsemen, beginning a storyline that will eventually tie in with Angel's transformation as well. Apocalypse's "the strong must survive" rhetoric is in full swing, as he stops the Marauders from killing Plague but leaves them alive, specifically because they help cull the weak. 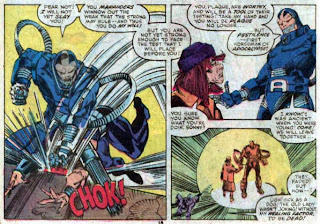 We learn of three more members of the Marauders this issue, two of whom make their first appearance. First, the superstrong Blockbuster. 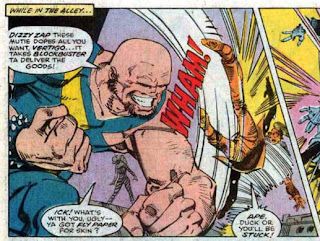 Secondly, Prism, who is essentially a man made out of crystal, who also dies this issue when he's slammed into a wall by Marvel Girl. 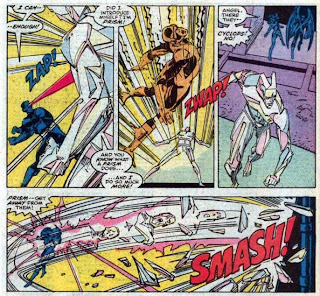 Finally, Sabretooth, who first appeared in Iron Fist #14 and has made a handful of appearances elsewhere prior to this issue, is revealed to be a member of the Marauders, and thus, is integrated into the X-universe, where he will become one of the franchise's more regular antagonists and, on occasions, a member of the X-Men. 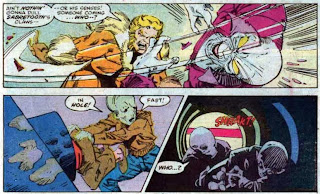 As she promised last issue, Mystique has leaked to the press the connection between Angel and X-Factor, thus bringing the characters ever closer to abandoning the mutant hunter ruse outright. It's also mentioned that Angel did his best to keep his connection to the group hidden, a little retcon that helps explain why no one made the connection earlier (though one does still wonder why nobody noticed that the blond guy in the X-Factor ads looks an awful lot like millionaire playboy and public superhero Warren Worthington III). As a result of this breaking news, Candy Southern rushes out of a board meeting to see Angel, returning to the book for the first time since issue #1. 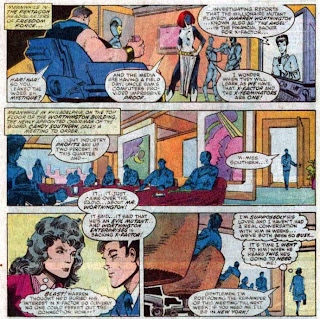 This issue features the Marvel 25th Anniversary dress on the cover, along with a pouty Cyclops.

The Chronology Corner
Power Pack #27 and Thor #373-374 occur between this issue and the next; we'll look at them in a few weeks.

A Work in Progress
Skids mentions that the Morlocks are able to tap into cable and have seen X-Factor's ads on TV. This prompts her to freak out when she learns that the X-Terminators are actually X-Factor, and that she's ended up at their headquarters with Rusty. When they explain the whole situation to her, her reaction is priceless. 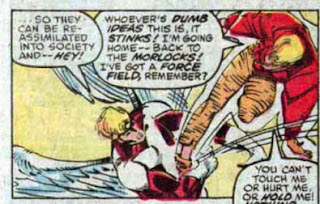 Sabretooth attacks Caliban in this issue, beginning a longstanding enmity between the two characters.

Beast says that, as an acrobat, he's used to dealing with vertigo and is thus immune to Vertigo's power, a clever bit of power usage that is almost Claremontian. 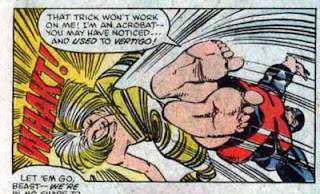 In the wake of the leak about his involvement with X-Factor, Warren finally admits that maybe the whole mutant hunter idea wasn't the best. 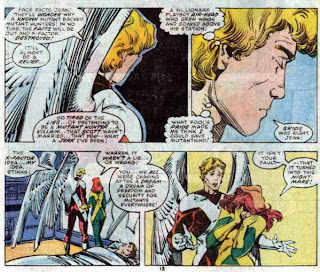 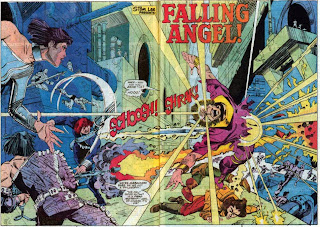 Young Love
Jean tells Warren that she doesn't blame Scott for moving on with his life, or even keeping his marriage a secret, and that even though she knows better, she can't help but worry about him. This being X-Factor, Candy then comes across Warren just as he's hugging Jean. Their embrace was simply a hug between friends, but Candy takes it the wrong way, (somewhat humorously) lashing out at Jean and storming out. 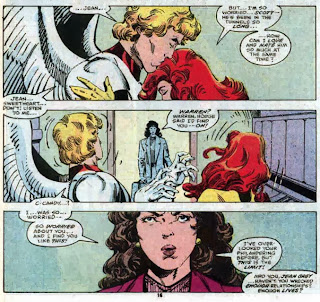 Later, an injured Cyclops thinks to himself that if Jean really wants to be with Warren, he won't stand in their way. 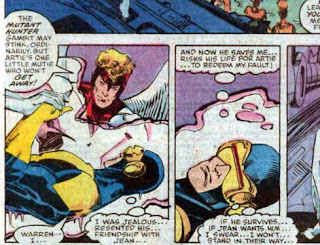 Louise Simonson on "Mutant Massacre" and its impact on crossovers
"We started those I'm afraid ... The mutant massacre was Chris's and my idea. Chris felt he had just too many mutants hanging around, and he was going to kill them off, just have some bad guys come down in the tunnels and blow the Morlocks away. And I said 'that's too big a story for a single title. Why don't we bring it across all of the mutant books?' It was very successful financially. It sold bazillions of copies, and after that they insisted that we do one of these crossovers annually. Now they do about three of them a year, but we started it. We'll probably have to pay for that in a later life … All those fans forced to buy every issue three or four times a year. Poor things. We didn't know. It was like Pandora's box – you don't know what's going to jump out. It was not done at all with the idea of causing a huge increase in sales; the idea was just too big for one book. But we're sorry now."

Walt Simonson on "Mutant Massacre"
"Partly, what we were trying to do in the crossover was not create a string of beads where you had to go from one bead to the next bead to the next bead in order to follow the entire storyline. What we were trying to do, rather, was to take several separate skeins and intertwine them in such a way that in the end they formed a coherent whole, but then unwound and went in their own directions. And you can follow any one skein through the Massacre: you can read X-Men, you can read X-Factor, or you can read Thor, New Mutants, Power Pack, or Daredevil without really having to go over and read all the other books. But, of course, then you don't get the whole picture."

Teebore's Take
This is the first genuinely good issue of X-Factor. While issues 6-9 represented a vast improvement over the series' earliest offerings, and showed a steady climb towards respectability, this is the first issue where everything really comes together. Of course, much of that is owed to the arrival of Walt Simonson, who brings a verve and energy (and some clever and effective panel layouts and constructions) to the art that the book has never displayed before. But Louise Simonson deserves some credit for the issues' success as well.

Not only does she manage to incorporate the larger "Mutant Massacre" into her story, featuring the same level of omnipresent dread and despair that permeated Uncanny X-Men #211, but she uses it to kickoff her most ambitious storyline to date, by having Angel viciously attacked and crippled by the Marauders. The attack itself is especially horrific, as Angel willingly sacrifices himself to save Artie, not even trying to stifle his screams so as to keep the Marauders' attention, thinking as his wings are crushed about how badly he's screwed everything up.

On top of that, she continues to ramp up the soap opera element (returning Candy Southern to the book at the most inopportune time while continuing to put Scott and Jean through the ringer), setup a new subplot and strengthen the book's Rogues Gallery (by bringing back Apocalypse) and take the piss out of the mutant hunter ruse (exposing Angel's involvement to the media, effectively causing him to throw up his hands and say, "the hell with it, it was a bad idea"). That Simonson is able to keep all these X-Factor-specific elements in play while not only adding in the "Mutant Massacre" stuff but using it to propel her own storylines along, is impressive. Having the other Simonson on hand to draw it all just makes the issue even better.