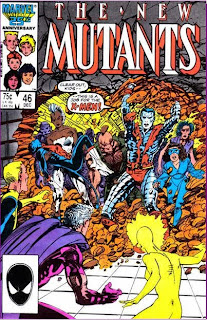 In a Nutshell
"Mutant Massacre" comes to New Mutants.

Plot
As an alarmed Lockheed alerts the New Mutants to the return of the X-Men, Illyana teleports to Muir Isle to enlist Moira's help in treating the injured. They arrive back at the school at the same time as the battered X-Men, who are leading a group of wounded, dying Morlocks. Moira immediately sets up a triage center, and the New Mutants help gather equipment, run supplies and treat the wounded. Throughout the day they work, overwhelmed by the horror of the situation. Doug, however, notices that Warlock is acting differently, constantly scanning the sky but refusing to explain why. Meanwhile, Karma, worried that if the Marauders are targeting mutants they could go after her younger siblings, tries to call them, but gets no answer. Illyana offers to teleport her to their apartment, but they find the place deserted., and when Karma turns on the lights, she triggers a bomb. 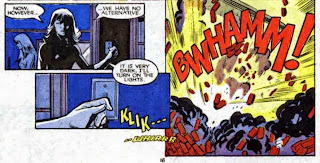 Back at the school, the rest of the New Mutants realize their teammates are gone and go after them, without telling the X-Men, whom they feel are dealing with too much else of importance. They sneak out through the tunnels beneath the school, as Warlock refuses to fly them, and are unknowingly being tracked by Warlock's villainous father Magus, the source of Warlock's strange behavior. The New Mutants arrive at Karma's apartment, having witnessed firsthand along the way the aftermath of the Marauders attack, and find Karma and Illyana relatively unharmed thanks to Illyana quickly teleporting them out of the apartment when the bomb went off. Suddenly, Warlock goes crazy, grabbing his teammates and rushing back into the tunnels. Just then, Magus appears, prepared to destroy his son and his allies, but Illyana manages to teleport the team out of his grasp, leaving an enraged Magus to swear he will track them down no matter where they run or how hard they hide.

Firsts and Other Notables
This issue represents New Mutants sole contribution to "Mutant Massacre", mostly dealing with the immediate aftermath of the events of Uncanny X-Men #211 and showing the New Mutants reaction to the ensuing carnage, as the issue ends with Claremont sending the team off on what will turn out to be a multi-issue arc set away from the mansion.

To that end, he revives the long-simmering Magus subplot (not referenced since Uncanny X-Men #192), as Magus finally tracks down and attacks Warlock, prompting Illyana to teleport the team to safety, a move that will ultimately take them away from the mansion for several issues. 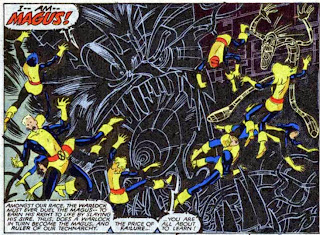 This issue also sees the launch of what will be another long running subplot: in the wake of the attack on the Morlock, Karma calls her younger siblings at the apartment they share together (seen in New Mutants Annual #2), but gets no answer, and when she and Illyana investigate, they discover the twins missing before triggering a bomb presumably left by their kidnappers. The New Mutants assume the Marauders are behind the attack, but this subplot stands as one of the more egregious examples of Claremont tossing a ball in the air then losing track on it: he'll touch on it a few more times during his tenure on the title (with Karma ultimately leaving the team to search for her siblings) but will fail to resolve it before leaving both this book and the X-Men franchise, leaving it to future writers to resolve the subplot, ultimately in, of all places, a Beast miniseries in the 90s. 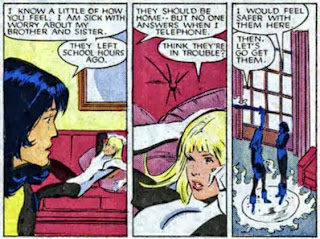 The X-Men will learn of the New Mutants disappearance in Uncanny X-Men #212, and this issue represents the last time the New Mutants will be seen sharing the school with the X-Men, due to future events in both titles.

A Work in Progress
Looking at the mansion as the X-Men return home bearing survivors from the massacre, Dani sees a massive image of Death looming over the school. 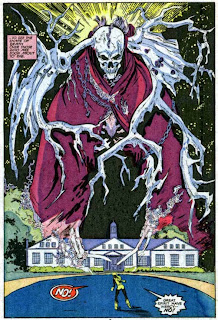 Certain readers of this blog will be pleased to know that as Illyana teleports Moira back to the mansion, she mentions leaving a note for the still-sleeping Banshee explaining where Moira has gone.

Following from X-Men #211, the X-Men return to the mansion, bearing wounded Morlocks. 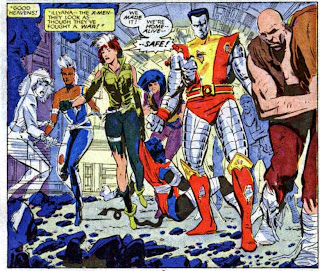 Psylocke makes a brief appearance, but more importantly, the word "totality" is used in relation to her for the first time. 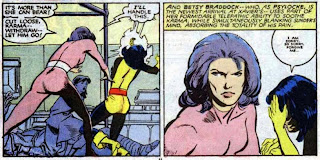 The Morlock Sunder freaks out in this issue when it's said that he must have his leg amputated. Though Psylocke ultimately calms him down, when Sunder next appears, he'll have both his legs. 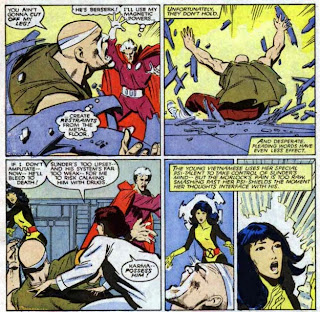 Continuing his characterization as a selfish jerk, Roberto is more angry about being reprimanded by Magneto than upset at what's happened to the Morlocks. 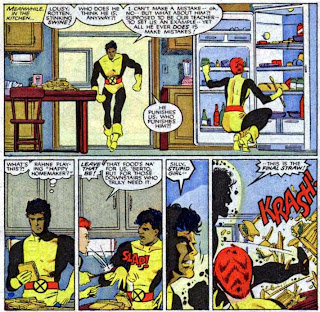 Illyana mentions that she tried to heal Kitty by taking her to Limbo and using magic, but was unable to do so. 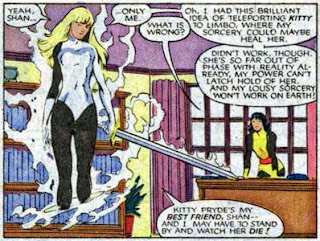 Teebore's Take
"Mutant Massacre" comes to New Mutants, though Claremont wisely sticks to the book's "students first" aesthetic and keeps them away from the bulk of the carnage, bringing the kids in only as triage nurses at the mansion (and later showing them reacting to the aftermath of the massacre, observed off panel when they sneak out of the school). It's a smart move, as it both gives the characters a chance to react to the events without having the X-Men ordering their students into a slaughterhouse. But the massacre really only concerns the first half of the issue - after that, Claremont focuses on addressing a pair of subplots: a new one, that will go unresolved by the author, and an old one, returning after simmering in the background for far too long.

As that second subplot rises to the surface, it kicks off the title's next multipart storyline, a deck-clearing exercise that will find the New Mutants separated from Magneto and away from the mansion for several issues. It's more cleverness on Claremont's part: he uses a languishing subplot to kick off an arc that sends the New Mutants away from the school, getting them out of the picture as the massacre and the changes it triggers unfold over in X-Men. As a result, this issue represents something of the end of an era - when the New Mutants finally return to the school, the X-Men will be gone, and the New Mutants will be the only pupils of Xavier left at the mansion.

Next Issue
Tomorrow, X-Factor encounters the Marauders in X-Factor #10. Next week, Wolverine meets an old foe in the Morlock Tunnels in Uncanny X-Men #212, while the New Mutants meet an unexpected new friend in New Mutants #47
Newer Post Older Post Home
Posted by Austin Gorton at 8:00 AM