Once Upon a Time: Quite a Common Fairy 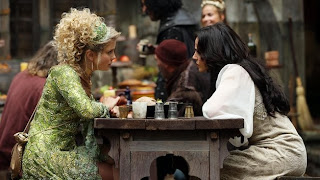 Considering this is ABC/Disney we're talking about, that was a pretty surprising admission of Mulan's feelings for Aurora, wasn't it? I mean, it wasn't like they came right out and said it, but the subtext was darn near text for two characters ostensibly based on stars of animated Disney films.

Henry's line about his family having a thing about apples was pretty great, and as much as Henry often bugs me, I have to give him credit for actually trying to shoot Pan instead of play along (as much as we knew Pan wouldn't get hit).

And while it only portends more focus on Henry, I do like the idea that he is significant because he's the child of parents born of the greatest light and the greatest darkness. But I'm a sucker for stuff like that.


Marvel's Agents of SHIELD: Girl in the Flower Dress
We're still not out of the "good, not great" woods, but this episode continues the show's steady improvement, deepening its mythology (that cryptic end tag might be best sustained minutes of the show yet), introducing a genuinely super-powered character (though disappointingly, they killed him off), and featuring a little more Whedon-esque snap to the dialogue, on occasion.

I was a little surprised they dealt with the whole "Skye's a double agent (?)" plot so quickly. Not that she couldn't still be pulling one over on SHIELD, but this episode seemed to settle the question of her loyalties for the time being. I'm not at all surprised she ended up remaining on the team, but I'm surprised the question was answered so early (also, realistically, there's no way she should still be on this team).

I was bummed the fire guy turned out to be an original character instead of an established one, until it became apparent he was going to die and thus it was clear why they didn't make him someone from the comics.

The sequence in which Scorch burns the doctor alive was surprisingly graphic for network TV. And an effective bit of fx work as well, especially considering this aired on the same network that has two Once Upon a Time shows consistently featuring graphics from the 90s 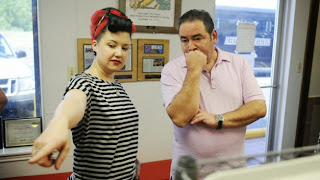 Oh, and I really wish Tom and Hugh had gone back to the kitchen to try the challenge themselves. That would have been awesome!

Captain Vietnam
Doing a vietnamese challenge was a nice way to highlight a New Orleans cuisine without being quite so obvious about it as "alligator!" and "gumbo!", so I appreciated that. Also, though I largely like Sarah, it's always nice when the cocky "I know how to cook this food" people end up on the bottom (like, seriously dude, so you've dated a guy from Vietnam. It doesn't make you an expert in all their food, ever). And Tom's comparison of Captain Vietnam's dish to finding a McDonalds in Paris and calling it French food was exactly what I was thinking throughout the episode as he kept yammering on about how he'd eaten it there once.

Brian is Korean, and says that doesn't automatically mean he knows how to cook Vietnamese food. Shirley is Chinese, and says that it would be embararrasing to go home on an Asian food challenge. Different perspectives.

Stephanie is allergic to shrimp, something which got casually tossed out but I wouldn't have liked to see more of. I'm fascinated by stuff like that, how chefs with not only specific tastes but a physical inability to eat certain foods make it in the industry as a whole and this show specifically (I would LOVE to see a vegetarian contestant on the show sometime, someone who refuses to eat and cook meat, but it will probably never happen).

If anyone ever wonders if the producers strong arm the judges into keeping certain contestants around, I point to this season, as the two most traditionally-attractive contestants of each gender have been eliminated rather quickly. I'm sure the producers are none too happy about that.


In the spirit of the season, I pulled my Essential Tomb of Dracula book off the shelf this week. I'm only about a half dozen issues in, but I'm digging it more than I thought I would, largely because of the gorgeous art by Gene Colan and Tom Palmer, which is especially good in black and white (something which isn't always the case). I even tried reading a couple issues in color via my Marvel Unlimited subscription, but the art didn't pop the same way it did in b&w. Plus, it fits the story better that way.


Revolution: There Will Be Blood
I'll give the show credit: this Titus Andover guy is one creepy bastard. Kudos to the writers for creating a no-questions-asked villain who isn't also a cartoon.

I was a little surprised they killed off Adam Beach so soon. I mean, the guy's not a huge star or anything, but he's been in movies and junk. I figured when he showed up he'd stick around longer than two episodes.

In Charlie news, she got hit with rock salt, and yelled at by Monroe. Never a bad way to feature Charlie.

I like the idea that everyone thinks Monroe fired the nukes, even while Monroe is genuinely sad over the loss of all the people who looked to him for protection.

More hints about the events immediately after the end of last season: something caused the computer to lock (hence Aaron's failure to stop the bombs) and nobody knows how they got out of the Tower.

The little throwaway bits like Walker, Texas Ranger and Aaron's tale of the mythical Ghostbusters do a nice job of making this world feel unique with minimal effort.


Modern Family: The Help
I should have seen it coming a mile away, but I didn't, so that whole "I'm the new Manny/I'm being replaced?" joke absolutely killed me.


Once Upon a Time in Wonderland: Down the Rabbit Hole 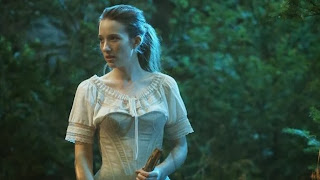 So far, it seems the best thing this show has going for it is the fact that, unlike the first two seasons of the mothership show, it's not beholden to split its time between a fantasy world and the mundane real world. Beyond that, it's too early to tell how this mashup of Alice in Wonderland and Aladdin will fare, as, presumably, it won't be able to rely on the novelty of seeing reimagined fairy tale characters pop up to smooth over the rough patches with quite the same frequency as the original.

Actually, I take it back: the best thing this show has going for it is Sophie Lowe as Alice, who pretty much kills it right out of the gate, striking the right balance between wonder and familiarity when in Wonderland and shading her performance with enough nuance to make her believable as a lead. As for the rest of the cast, we didn't get much from the Genie, but he strikes me as the kind of bland pretty boy that makes you wonder why the heroine is so infatuated with him, while the Knave of Hearts brings a unique and potentially fun energy to his role as the stock scoundrel with a heart of gold. Not sure what to make of the Red Queen yet (and shouldn't she be Cora, who we learned was the "off with their heads!" queen in Wonderland on OUAT last season? Or am I getting my Alice characters mixed up?), while Sayid-as-Jaffar is fine, except for his distracting 80s Jheri curl.

The worst part of the show so far? The awful, awful effects. Like, they are mid-90s computer game bad. And this is the pilot. I hate to see what they're like in an episode with a regular budget.

Also, the episode didn't make this terribly clear: is Alice from the late 1800s/early 1900s? While the Knave had been spending time in present day-adjacent Storybrooke, then journeyed back in time to Alice with the help of the White Rabbit? Or was Alice supposed to be in a modern day asylum that used gas lamps and put its patients in corsets for some reason?

I say this not as a critical comment, but I genuinely hope ABC sticks to their guns and keeps this as a limited run "event" series, and doesn't extend it past its intended thirteen episodes. I wouldn't object to the characters showing up on the original show, or the network doing something similar with a different story next season, but this was intended to be a self-contained story, and I hope it stays that way. Given the ratings (which have been abysmal), that shouldn't be a problem.
Newer Post Older Post Home
Posted by Austin Gorton at 8:00 AM