How I Met Your Mother 9x04: The Broken Code 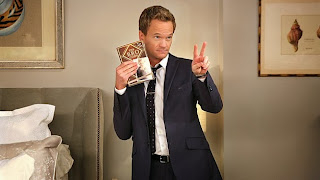 Hopefully this is the end of any "tension between Ted and Barney" plotlines for the series. I've accepted the fact that this whole Ted/Robin business is going to carry on through the end of the series (accepted, but still not liking), largely because the creators have said as much, and any lingering issues between Ted and Barney as a result of Robin are certainly something that needed to be addressed. But there's only so much "Ted's going to ruin the wedding" tension this season can sustain, and with so much else this season being atypical, the last thing it needs is tons of intergroup tension running throughout. The issues addressed in this episode needed to be addressed before the series ended, but now that they have, hopefully they won't be brought up again.

Other Thoughts
For awhile I thought the whole "Robin can't be friends with girls" subplot would culminate in her running into the Mother and striking up a friendship, but I guess not. As it was, it certainly addressed a consistent character trait, but otherwise kinda came out of nowhere.

Another consistent but more troubling character trait on display this episode was the fact that Lily can kind of be a monster sometimes (in this case, intentionally ruining Robin's new friendship out of jealousy). Again, it's consistent, and it's not even that unrealistic, but this being a sitcom, its exaggerated to the point that you wonder why anyone is even friends with her.

Nice to see Billy Zabka return, though I wasn't sure if his vendetta against Ted was meant to be a stinger to this episode or the setup of a plotline for a future one. Either way, always a pleasure.

Marshall interacting with the group via Facetime and a revamped Marshpillow was pretty sitcom-y, but it was nevertheless good to have him interacting with the rest of the characters again ("E-lawyered!"), and I continue to appreciate the restraint in not saddling him with tons of road trip shenanigan stories.

The audio during Ted and Barney's rained-on beach conversation was pretty awful, considering this is a well-budgeted, professional television show. It sounded for large parts like Ted was in a tunnel, while he clearly was not.

Lily's Imaginary Robin: How about we inject a sexual edge into our abiding friendship that in no way jeopardizes our emotional connection or respective marriages?

Barney: I was having such a good time greasing 12-year-olds!
Ted: Lazer Tag
Marshall: Helpful, continue.