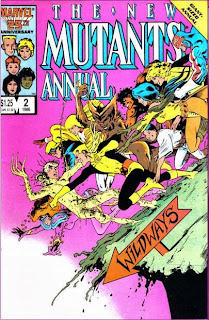 In a Nutshell
Cypher and Warlock help free Psylocke and the New Mutants from Mojo.

Plot
In Switzerland, retired superhero Elizabeth 'Betsy' Braddock is suddenly attacked and captured by Mojo and Spiral. Later, at Xavier's School, a despondent Doug discusses his role as a New Mutant with Dani. At the same time, children all over the world, including the New Mutants and Karma's siblings, are entranced by a new animated TV show called Wildways, featuring Mojo, Spiral and Betsy. A week later, Betsy's brother, Captain Britain, is attacked at an abandoned school in Manhattan while searching for his missing sister. At the same time, an entranced Roberto is taken by Mojo and replaced with an android duplicate. Later, Roberto is seemingly killed. Warlock, however, realizes that the dead Roberto is an android. At the abandoned school, Mojo transforms the children he's ensnared, including Roberto, Rahne, Karma's siblings and three kids who befriended Longshot, into a super-powered team of adults he dubs the Brat Pack. As the New Mutants track their missing teammates to the school, they're attacked by the Brat Pack, and all but Doug and Warlock are captured and transformed themselves. 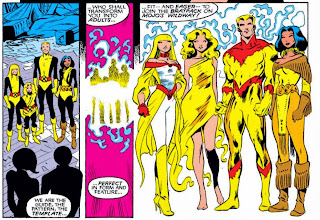 On their own, Doug and Warlock discover a frightened and de-aged Captain Britain, who tells them that Betsy is responsible for brainwashing their teammates, and where to find her. Sneaking into the principal's office, Doug and Warlock discover Betsy, now transformed in Mojo's image. They merge together in an effort to free her psyche, but are instead drawn into her mind, where they learn that a jealous Spiral intends to destroy her. Together, Doug and Warlock are able to free Betsy's mind, who then defeats Spiral and returns everyone to normal. Back in reality, Betsy realizes that Mojo has given her bionic eyes, yet she is unwilling to remove them. She and Captain Britain return with the New Mutants to Xavier's School, where Betsy decides to stay and learn better control over her telepathic abilities. Doug, meanwhile, has found new confidence in his place on the New Mutants and their ability to help other kids.

Firsts and Other Notables
This issue represents the first American appearance of future X-Man and Asian ninja sex object Elizabeth "Betsy" Braddock, aka Psylocke. A purple-haired telepath, she is the sister of Captain Britain (who also appears in this issue, but has made previous appearances in American comics) and was created by Chris Claremont during his brief tenure writing Captain Britain stories for Marvel UK, and she was later developed by other Captain Britain writers into a regular member of that book's supporting cast. At the conclusion of this issue, Betsy decides to remain at Xavier's school to learn to better control her telepathic abilities. Her story, however, will be carried on by X-Men moving forward. 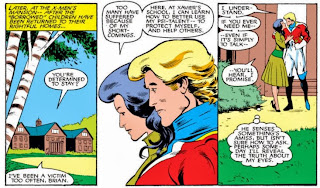 Just prior to where this story picks up, Betsy had recently completed a brief stint as Captain Britain herself, which ended with her getting her eyes removed by the villain Slaymaster and retiring to Switzerland (regular commenter and friend of the blog Matt has been doing a bang-up job on an overview of Captain Britain's UK adventures over on his blog that I recommend everyone check out, but if you're just interested in the events immediately preceding this story, check out this post).

This story finds Longshot's archnemesis, Mojo, giving Betsy bionic eyes (X-Men Annual #10 will reveal this is so he can broadcast her adventures, as seen through her eyes, as TV programming in his home dimension), which she will possess until her transformation into an Asian ninja (and they will remain a plot point even after that). 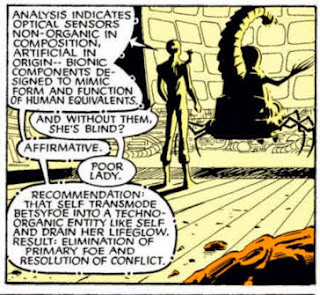 This issue also sets up what will be a brief relationship between Doug and Betsy (ultimately, with Psylocke becoming a part of X-Men, the relative directions of their respective books will prevent Claremont from fully exploring this relationship), continuing Doug's somewhat ironic lady killer ways. 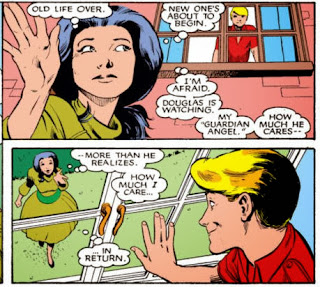 After using Spiral in several stories already, Claremont casts Ann Nocenti's Mojo as the villain of this story (albeit a largely background one), appropriating that character into the larger X-universe along with his former Marvel UK characters. Claremont also uses Nocenti's Little Rascals-esque Brat Pack in this story. 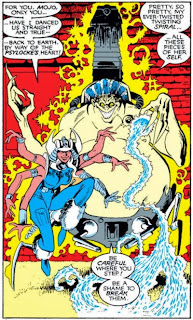 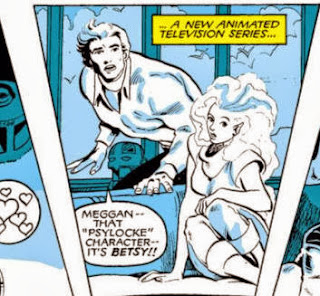 Karma's younger twin siblings, Leong and Nga, feature heavily in this story, and it represents their largest use yet. 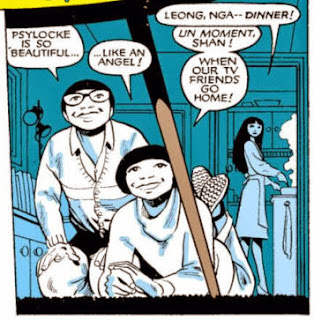 One of the transformed Brat Pack kids is given the codename Jubilee, and though she shares some of the same abilities, is not in any way related to the future character of the same name who eventually joins the X-Men. 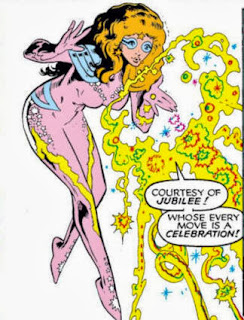 The merged form of Doug and Warlock is referred to as "Douglock"; like Jubilee, this name will be used again in the future, albeit on a character with a more direct relationship to Doug and Warlock.

Fan favorite artist Alan Davis provides the art for this issue, having previously worked, amongst other things, on Captain Britain stories in the UK. This marks the beginning of a long collaboration between Davis and Claremont and Davis' involvement with the X-Men overall, one that will see him handling a few annuals and fill-in issues of Uncanny X-Men before helping launch Excalibur, a title he will eventually both write and draw.

The Chronology Corner
This story takes place between issues #44 and #45 of New Mutants, as Doug references the team's encounter with Legion in issue #44 in the course of the issue.

A Work in Progress
Magneto is noted as being absent during this story, though it's not clear where he is (he's more or less hanging around the mansion during contemporaneous issues of X-Men, so it's not like he's away on a mission with them).

During a training session, Sam is frustrated with his rudimentary skills, a reminder of the New Mutants' encounter with the Beyonder. It's also correctly noted that Roberto is not suffering from the same "reset skill level" as the rest of the team, since he was away from the team when they were killed and resurrected.

It's once again noted that mutants generally develop their powers during puberty.

Doug and Warlock merge again, though this time, the connection is longer and reaches a point where Doug starts talking like Warlock and vice versa. Ultimately, it's said that Doug suffered no after effects from the process. 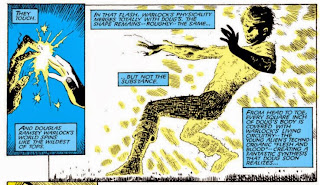 Though she doesn't take the name as a formal codename in this issue, Mojo refers to Betsy as "Psylocke" (which is most likely a play on the pronunciation of the word "psyche" - if you have a psy-key, then you need a psy-lock).

Claremontisms
Warlock, Doug and Sunspot attempt to clear some dead trees off the mansion's grounds, that most Claremontian of down time activities. It also gives him an opportunity to reminds us that Sunspot is super-strong but not invulnerable.

My Hero, Thomas Magnum
Roberto is so entranced with the Wildways TV show it overrides his love of Magnum, P.I. 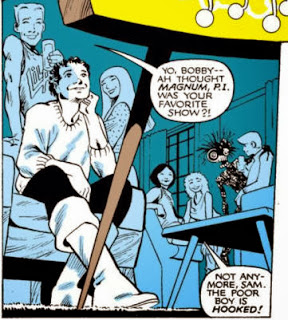 Teebore's Take
This issue, along with X-Men Annual #10, represents Claremont's efforts to absorb the settings and characters of his editor's Longshot miniseries into the large X-Men narrative, along with, to a lesser extent, some of his own creations from his days writing Captain Britain for Marvel UK (and those of other Captain Britain creators such as David Thorpe and Alans Moore and Davis). This effort will, in part, ultimately result in two new members for the X-Men, another spinoff title, and a setting/group of characters the author will return to on a regular basis for the remainder of his involvement in the X-Men universe.

For now, though, he's focused on integrating some of these rather disparate elements into his ongoing narrative while laying the groundwork for future Mojoverse and Captain Britain-centric stories. Ultimately, both types of stories will take on a more whimsical tone than the usual X-Men stories, while Claremont will hew closely to Nocenti's original take on Longshot by using the Mojoverse stories for social and cultural satire, and these elements are on display here (Mojo's Wildways TV show, for example, literally possesses children).

The key element to this story, however, both here and in the subsequent X-Men annual, involves age-changing, as the New Mutants get aged up and Doug and Warlock are forced to fight adult versions of their friends. Fortunately, this fits in well with the overall theme of New Mutants, dealing as it does with the coming-of-age of teenagers. This kind of age transition (first literally increasing their age, then (in the X-Men annual) giving them the responsibilities of adults even while they remain teenagers) is a standard genre trick for this kind of story, but Claremont uses it well to ground to all the other Mojoverse/Captain Britain zaniness.

It also helps that Doug, a character who often blends into the background and whose non-physical power makes it all the more exciting when he does save the day - gets the spotlight. And, of course, the whole thing is elevated by the presence of Alan Davis, who keeps everything looking great even while the story goes through more and more outlandish turns. There's a lot going on here, and a lot that sets up some fairly significant future developments in the narrative, but the level of craft involved on the part of the creators helps keep things from spinning out of control, and helps make the issue highly enjoyable.

Next Issue
Tomorrow, the Mojo-fication of the X-Men continues in X-Men Annual #10, followed by a pair of Spider-Man issues, Web of Spider-Man Annual #2 and Amazing Spider-Man #282.
Newer Post Older Post Home
Posted by Austin Gorton at 12:00 PM