In a Nutshell
The New Mutants deal with the suicide of a young mutant.

Plot
The New Mutants and Kitty Pryde are invited to the spring dance at the local high school. Though the New Mutants generally have a good time, Kitty is less excited until the principal introduces her to Larry Bodine, a recent transfer student. Though Larry is geeky and a little awkward, he and Kitty hit it off. However, Larry is secretly a mutant, and a group of kids, ignorant of this, bully him by threatening to call X-Factor, scaring him. After the dance, the New Mutants, Kitty and Larry go to Harry's Hideaway, and Larry, desperate to fit in, tells some of the latest mutant jokes he heard at the dance. Not surprisingly, Kitty and the New Mutants turn cold towards Larry, and call it a night. Returning home, Larry discovers an X-Factor flier the other kids stuck into his jacket, scaring him further. Unbeknownst to him, however, Rahne has followed him home, suspecting his anti-mutant jokes were part of an act, and she watches as Larry uses his mutant power to create hard light sculptures. 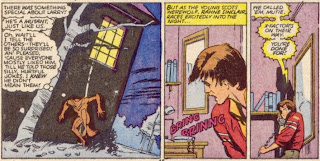 The next morning, Rahne is delighted to tell her friends the truth about Larry, but is interrupted by Magneto, who grimly announces that overnight, Larry committed suicide. The New Mutants deal with this news each in their own ways, while a saddened Kitty sneaks into Larry's house to discover his sculptures. Rahne picks up the scent of Larry's bullies off the X-Factor flier, and tracks them to the local mall. Hoping to exact vengeance on them, she is stopped by Dani, Sam and Kitty, who tell her they need to be better than vengeance, though all agree something needs to be done. At Larry's memorial service, Kitty takes the podium and delivers a speech about prejudice, telling the crowd that, like, Larry, she is many things, but using labels to define anyone can have terrible consequences, and that all people are more than their labels.

Firsts and Other Notables
The existence of X-Factor looms large over this story, as the threat of getting "caught" by X-Factor is the centerpiece of the prank played on Larry and the ultimate impetus of his suicide (he fears they will somehow take away his power, and doesn't want to live without them). However misguided the mutant hunter ruse seems in the pages of X-Factor's own book, as much as the idea that the for all the good they're doing, they're also inflaming anti-mutant prejudice, nothing brings that idea home more than this story, which makes X-Factor indirectly responsible for at least one death.

The cover of this issue features the Marvel 25th Anniversary frame/center head shot layout, celebrating twenty-five years since the publication of Fantastic Four #1. All issues cover-dated November 1986 feature this same design, but because New Mutants has, for most of its history, been on sale a month ahead of the other X-books with the same cover date, we get its anniversary cover before the X-Men and X-Factor covers.

This issue is included in the Chris Claremont Visionaries hardcover collection.

The Chronology Corner
This issue takes place after New Mutants Annual #2, which we'll look at next week.

A Work in Progress
Hey, remember when Kitty was somewhat inappropriately angsting about getting glasses in X-Men? Well, she got them, and wears them for the first time in this issue. 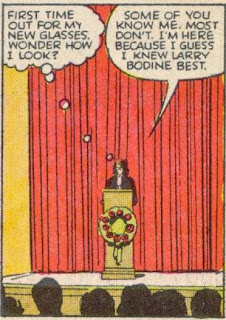 Claremontisms
Larry refers to himself as a "a body", a favorite neologism of Claremont's.

Young Love
Warlock references Doug's feelings for Kitty, though Doug declares they are just friends, and he's fine with that. 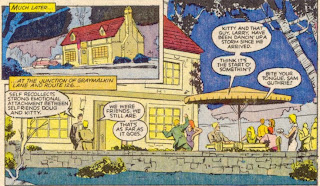 Kitty is later despondent when she realizes most of the boys at the dance are just dancing with her in order to get to Illyana.

Human/Mutant Relations
Dani compares a bumper sticker she sees lauding X-Factor to ones she saw in Colorado professing the same thing about "redskins" instead of mutants. 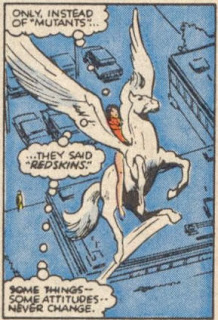 The issue ends with a speech given by Kitty, in which she makes it clear that "mutant" is just another label used to define people, that labels can hurt, and that ultimately, everyone, even mutants, are more than their labels. 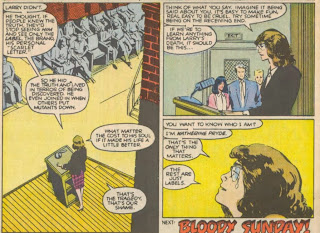 Teebore's Take
The final standalone issue in this little mini-run leading up to "Mutant Massacre", this story is essentially a "very special episode" of the comic. The "very special" moniker carries with it a certain stigma, as often times these kinds of stories are painfully earnest, and more of a lecture than an actual story. This issue is certainly earnest, but it's also an effective one-issue examination of the metaphor that lies at the heart of the X-Men to tell a story about the consequences of prejudice, fear and hatred.

It's not perfect, though, and most of the problems stem from the involvement of Kitty. It makes sense that Kitty has become the character most often confronting prejudice head-on in these types of stories, but after doing so in "God Loves, Man Kills", then again in the infamous N-word scene in Uncanny X-Men #196, and AGAIN this very same month, in X-Men #210, it starts to lose some of its impact, and this story suffers a bit, through no fault of its own, as a result. There's also something to be said for the big speech at the climax of the issue coming from Kitty, who isn't even a regular character in this book. Again, it makes sense why Kitty gets used in this fashion, but does she really need to usurp the stars of the book?

But these are minor quibbles. This is a moving, effective bit of storytelling that speaks to the potential inherent to the comic book form, to use brightly colored sci-fi and action-adventure stories to illuminate universal truths and, perhaps, force people to question their behavior. If you wanted to hand someone one single comic that perfectly encapsulates what the X-Men are about, in thematic terms, this one would be up for consideration.