The Walking Dead 4x01: 30 Days Without An Accident 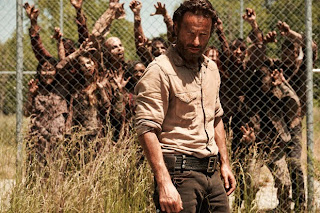 You may have noticed that Teebore has been late with some of his posts recently. Well, he's going through some rough stuff that, while he may not want everyone to know about it, I think it's important that our readers are aware of what's going on.
It's no secret that Teebore has been doing a lot of posts per week and Teebore was planning to add to his already lengthy list of weekly posts with a The Walking Dead review. To accommodate all the posts he was doing he needed to stay up late. He started hitting the caffeine pills pretty hard.
At first I didn’t think much of it. Then he overslept for a singing audition I set up for him with a record producer after creepily recording him and his friends in the locker room. Turned out Teebore had ODed on the caffeine pills. Even though he missed the audition and was obviously burnt out he still immediately wanted to start writing his The Walking Dead post but first he went for the caffeine pills. I had to stop him. I knew it was all too much. While it was true that he was so excited...so excited he was also so...scared.
So I’m taking over The Walking Dead posts for this season. This is bad news for anyone who likes coherent, well thought out, thematic analysis of each episode but it is good news for people who like nonsensical ramblings loosely tied to The Walking Dead that more-or-less appears to be random words strung together during an alcohol induced stupor. It may not be perfect but if Teebore’s struggles in recovery from caffeine pill addiction has taught me anything it’s that all we need push on in the face of adversity and persevere.
Anyway...on to the review!