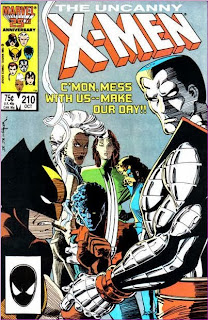 In a Nutshell
The Marauders make their move as the X-Men hunt for their missing teammates.

Plot
In Los Angeles, a Hellfire Club soldier named Richard and his girlfriend Tommy, a former Morlock, are hunted by unseen pursuers. Richard is struck by an energy blast, and urges Tommy to leave him behind. She slips aboard a train heading east. In San Fransisco, Dazzler is possessed by a psychic entity named Malice, a teammate of the group hunting Tommy. In New York, the X-Men search for the missing Phoenix and Nightcrawler. At the mansion, Kitty modifies Cerebro so that non-telepaths can use it. Shortly thereafter, it alarms, indicating one of missing X-Men has been detected, and Kitty, Colossus and Illyana leave to investigate. Meanwhile, Magneto arrives at the Hellfire Club and sees X-Factor from afar, whom he recognizes as the original X-Men. Inside the club, Sebastian Shaw offers Magneto the title of White King, to be claimed in his own name or the name of the X-Men. Magneto agrees to consider the offer. 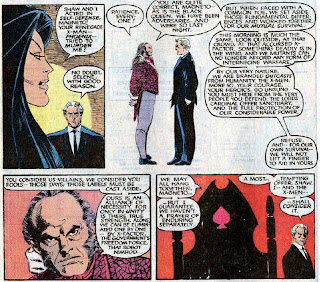 Elsewhere, Nightcrawler is chased into a derelict warehouse on the Hudson River by an angry mob when Kitty, Colossus and Illyana arrive. Kitty admonishes the crow, and manages to disperse them. When she asks Nightcrawler why he didn't just teleport away, he tells her he has lost his power. Meanwhile, in Central Park, Wolverine and Storm track Rachel's scent to the point where it disappears, and they determine there's nothing further they can do for their teammate. Beneath the streets, Tommy emerges from a subway car and heads for the Morlock Tunnels, but just outside she's caught by the group that killed her boyfriend. Announcing themselves as the Marauders, they thank her for leading them to the rest of the Morlocks, then tell her she'll soon have lots of company just before they kill her.

Firsts and Other Notables
The Marauders make their first partial appearance, in shadow. As of yet, we don't know much about them besides the name of their group and their homicidal tendencies. They do mention having a boss, who will eventually be revealed to be Mr. Sinister, making this the first reference (albeit indirectly) to that character. 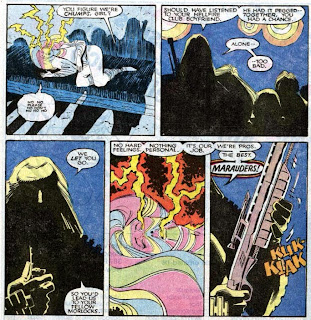 One member of the Marauders who does get named this issue is Malice, a psychic entity who can take control of other people's bodies (placing a choker with a face on it around her victim's neck when she does so) and appears for the first time as she takes control of Dazzler, who is still in hiding as a member of Lila Cheney's band. We'll next see her in issue #213. 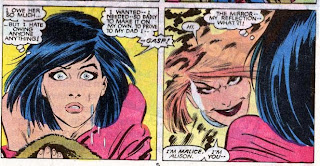 To a lesser extent, the Morlock Tommy, a young woman who can make herself paper thin (and is also brightly colored for some reason), make her first and last appearance, serving as the Marauders' first on-panel victim. It's said in this issue that she is responsible for leading them to the Morlock Tunnels (thus enabling the ensuing massacre to commence), but later issues will somewhat contradict this by revealing that Gambit was tasked by Mr. Sinister, the Marauders' leader, to assemble the team and lead them into the tunnels. It could be argued that, in this issue, Tommy merely led them to the door, so to speak, while Gambit showed them how to open it. 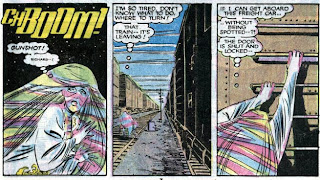 The X-Men learn of X-Factor, at least in terms of them being mutant hunters for hire, this issue (which seems a bit odd given X-Factor has been doing their thing for a while now, but the X-Men have been in San Fransisco and then in the Morlock Tunnels for most of that time) and the original X-Men appear as X-Factor in the book for the first time. In one of the first crossovers between the books (we'll see this same (mostly) scene from X-Factor's perpsective in their ninth issue), Magneto and X-Factor witness each other from afar and recognize one another, though neither is in a position to confront the other (and Magneto assumes that Jean is Madelyne, which, presuming he tells the X-Men of this encounter some point off panel, will cause some problems later down the line when the X-Men start hanging out with Madelyne again). 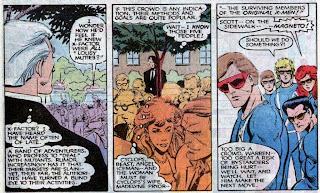 Magneto is offered the title of White King of the Hellfire Club in this issue, with Sebastian Shaw arguing that in the face of rising anti-mutant sentiment, the X-Men and Hellfire Club must work together to survive despite their differences. The remaining Lords Cardinal, including the White Queen and Selene, all appear, and though Magneto will ultimately accept their offer on behalf of the X-Men, it will be sometime before we see any of the Lords Cardinal again in the book, and the X-Men's alliance with the club will largely become a non-starter.

Nightcrawler has seeming lost his power as of this issue. It will return next issue, though it will be unreliable when it does.

As of this issue, Cerebro is modified so that non-telepaths can use it. 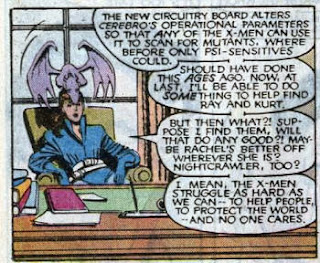 Though John Romita Jr.'s run on the title ends with the next issue, he will merely be providing layouts for Brett Blevins pencils, making this issue the final pairing of Romita Jr. with inker Dan Green (at least until Romita's second run on the book).

The cover to this issue is another iconic, often homaged X-Men cover.

A Work in Progress
As Dazzler schleps around stage equipment, we're once again reminded that mutants are generally stronger than regular humans, regardless of whatever other powers they have, something that doesn't get brought up too often.

Rogue hasn't angsted about it a lot lately, but we get a moment where she reflects on her inability to touch anyone after saving some grateful construction workers.

She also mentions carrying a stash of cash in her belt at all times, the better to pay for her purchases at Bloomingdales.

Colossus returns to wearing his original yellow and red costume, saying all of his new ones have been damaged. 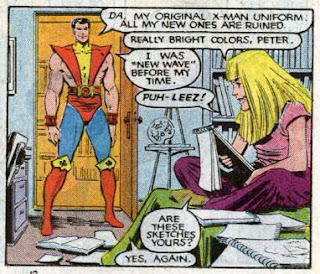 Kitty is now able to control her power to the point where she can solidify her forearm while phasing the rest of her body. 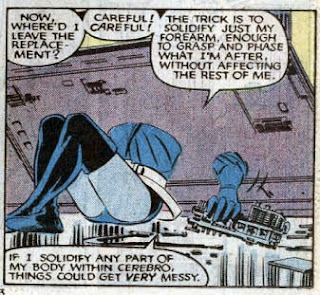 Storm admonishes Wolverine for his actions against Rachel, not disagreeing with his intent to stop her from killing but saying it never should have come down to Wolverine having to kill Rachel, and that the X-Men, as a team, should have handled the situation together. 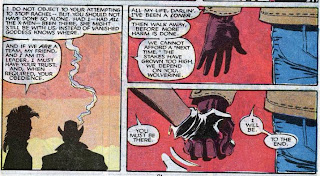 I Love the 80s
I'm not sure if its meant to be a reference to Dr. Strangelove or not, but the zeal with which a store clerk declares you can't fight in Bloomingdales is hilarious. 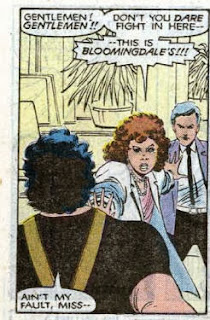 "Ah, Illyana, my sister, I am now going to tell you information you already know about yourself out loud, as though someone who may not know the information we both already know is listening to us." Human/Mutant Relations
A shopper at Bloomingdales confronts Rogue for being a "mutie", sparking a confrontation between himself and one of the construction workers she rescued earlier. 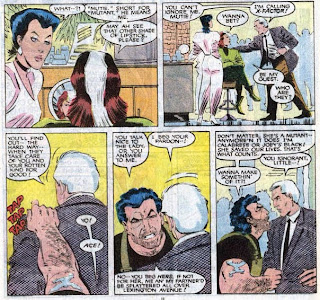 In a nod to the fact that the general public is often seen lauding the superpowered Avengers even while they fear and hate the mutant X-Men (a hypocrisy that is never properly addressed in the Marvel Universe), a cop tells X-Factor that mutant or superhuman makes no difference to him.

Nightcrawler is chased by an anti-mutant mob, in a deliberate echo of his first appearance. 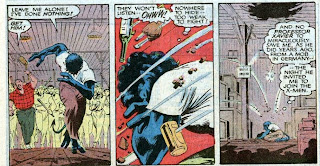 Kitty admonishes the leader of the mob for saying Nightcrawler "obviously" isn't human, pointing out the Nazis once said the same thing about Jewish people. 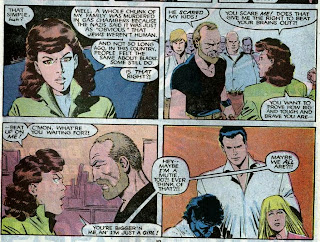 In a delightfully cheeky rejoinder, when Kitty is told she shouldn't talk to her elders in such a way, she responds that she doesn't, to the ones she respects. 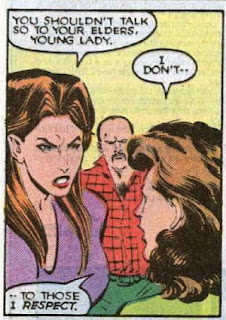 Teebore's Take
In many ways, this is another Quintessential Claremont Quiet issue, a downtime story set after a big action story that allows the characters a chance to breathe and reflect on recent events while subplots are advanced. But it's also a lot more than that. For one thing, it continues to add to the air of menace surrounding human/mutant relations, giving Kitty another chance to confront bigots with the illogic of their hatred (and in a bit more eloquent manner than in similar times past). It also, one month after Louise Simonson used an issue of Uncanny X-Men to setup a story in X-Factor, formally acknowledges the existence of that title by having Rogue and Magneto react to their public mission, in the process bringing us the closest yet to a direct crossover between the titles.

But even while, plotwise, it's mostly reacting to the previous story arc, this issue is also setting up the next one. As that arc is "Mutant Massacre", which will shake up the book like it hasn't been shook since Giant Size X-Men #1,this issue also, retroactively, serves as a last gasp for a certain era of X-Men. The "classic" New X-Men roster is long gone: Cyclops is a wife-abandoning cad, Banshee is retired, Storm is punked out and powerless. But the Romita Jr.-era X-Men have been around almost as long as the original New X-Men were, and for fans of that era (like myself), this issue is somewhat bittersweet, an ending of sorts to a certain style of X-Men story. As a result, it's another personal favorite, one last chance to enjoy this iteration of characters in this setting before the story this issue is setting up comes along and blows it all up.

Next Issue
Tomorrow, the New Mutants star in the "very special" New Mutants #45, followed by X-Factor #9, in which the conflict with Freedom Force escalates, on Friday and next week, Longshot returns in Uncanny X-Men Annual #10.
Newer Post Older Post Home
Posted by Austin Gorton at 2:00 PM