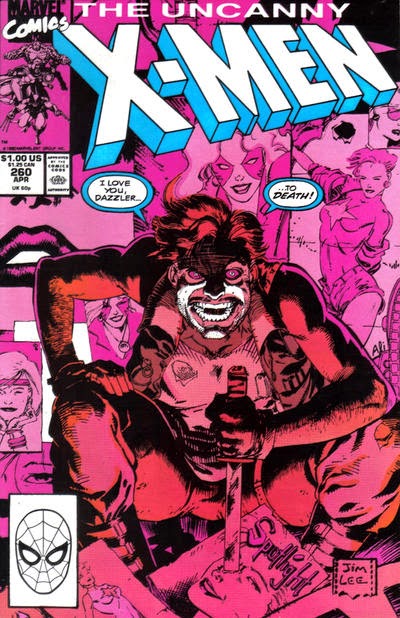 In a Nutshell
Dazzler faces off against her stalker.

Plot
In the Hollywood Hills, Eric Beale plots to kill Dazzler, while in Malibu, Freddie screens Dazzler's movie for her, and asks for her help in drumming up support for a release, but she's reluctant to do so. Going outside to surf, Beale draws a bead on her with a sniper rifle from a nearby hill. However, he consistently misses her, enabling her to spot him and blast his rifle with a laser bolt, but Beale escapes. Determined to draw him out, Dazzler agrees to help Freddie release the film. In Manhattan, the woman with whom Peter is obsessed gets attacked by a group of muggers in X-Men masks outside his apartment. He and Jenny Ransome come to her rescue, but she runs off again before Peter can talk to her. In Hollywood, Freddie and Dazzler strike a deal with Baron-Fox Studios to release Dazzler's movie, unknowingly dodging repeated attacks by Beale. 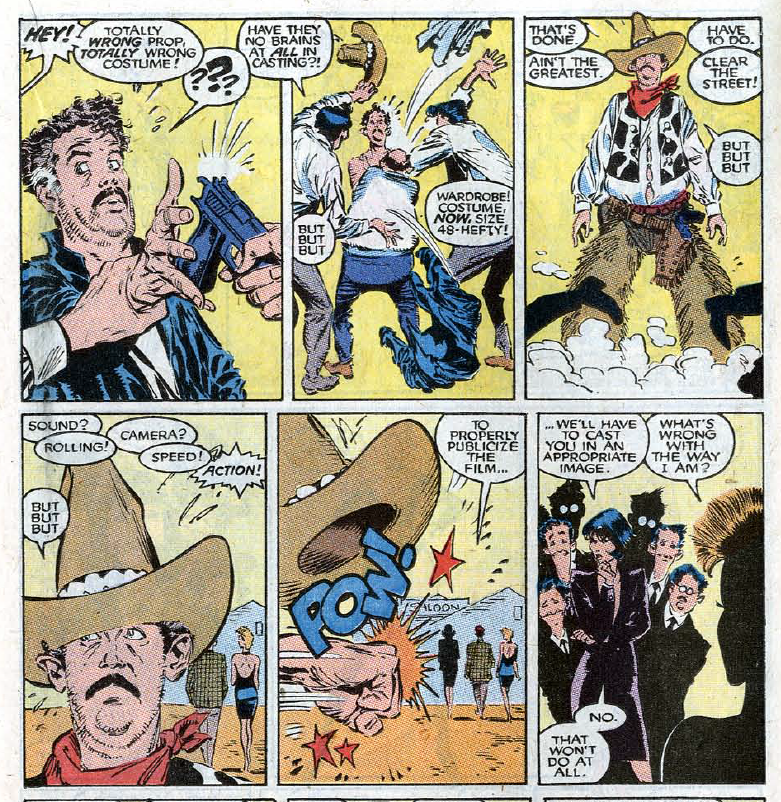 On  Kyrinos, Banshee and Forge are about to board a charter plane bound for Cairo in search of the X-Men, but when they learn about Dazzler's return, they decide to head for Hollywood instead. The pilot, Cylla Markham, departs without them, and moments later is shot down by Fenris, who then destroy the airfield, but not before Banshee is able to fly himself and Forge to safety. In Malibu, Beale finally captures Dazzler and brings her to his mansion to kill her, but she fights back. However, Beale is too hopped up on drugs to feel any pain, so she instead uses her power to calm and soothe him, and realizes she can help other people in similar ways, giving her new life new purpose.

Firsts and Other Notables
Banshee and Forge's search for the X-Men begins in earnest, as they finally leave Muir Island. They go to the Greek island of Kyrinos, where Professor Xavier went to recover from his breakup with Moira/vacation with Lilandra, where Phoenix went when she believed the X-Men were dead, and where Storm and the New Mutants went after defeating the Shadow King, just before getting teleported to Asgard, en route to Cairo, Egypt, before getting diverted to Hollywood upon news of Dazzler's return.

Cylla Markham, Forge and Banshee's pilot, appears for the first time in this issue. She is seemingly killed when her plane is blown up, but future issues reveal she survived and agrees to be remade as a Reaver by Pierce, after which she'll pop as a villain in Wolverine. 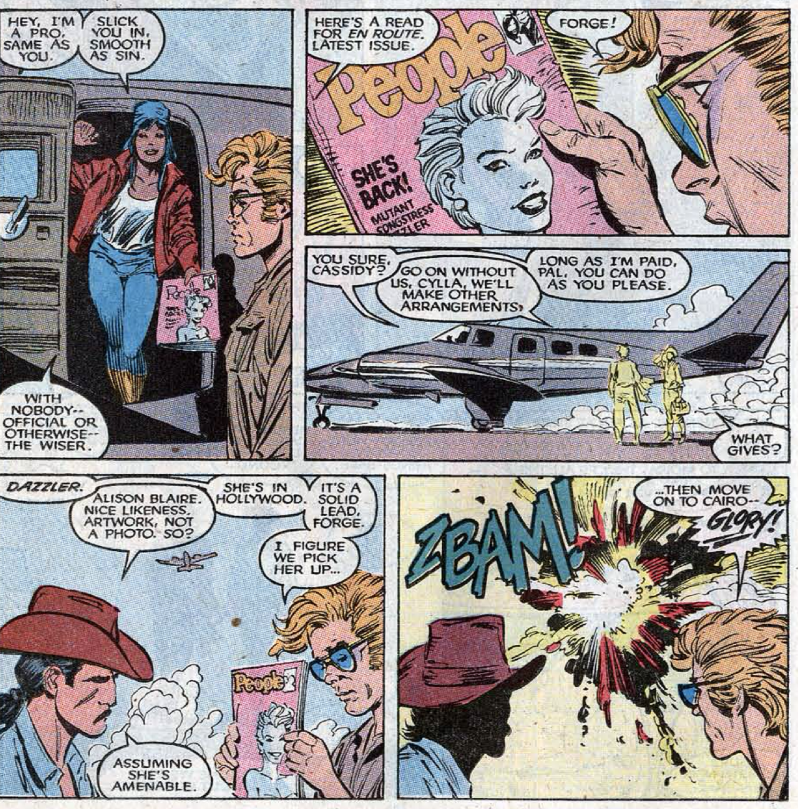 Cylla's plane is destroyed by Fenris, the mutant children of Baron Von Strucker who attacked the X-Men in issue #200 (and who recently made an appearance in "Acts of Vengeance"). They say they learned of Banshee and Forge's plan via a mysterious informant; the informant will shortly be revealed to be a Shadow King-controlled Moira. 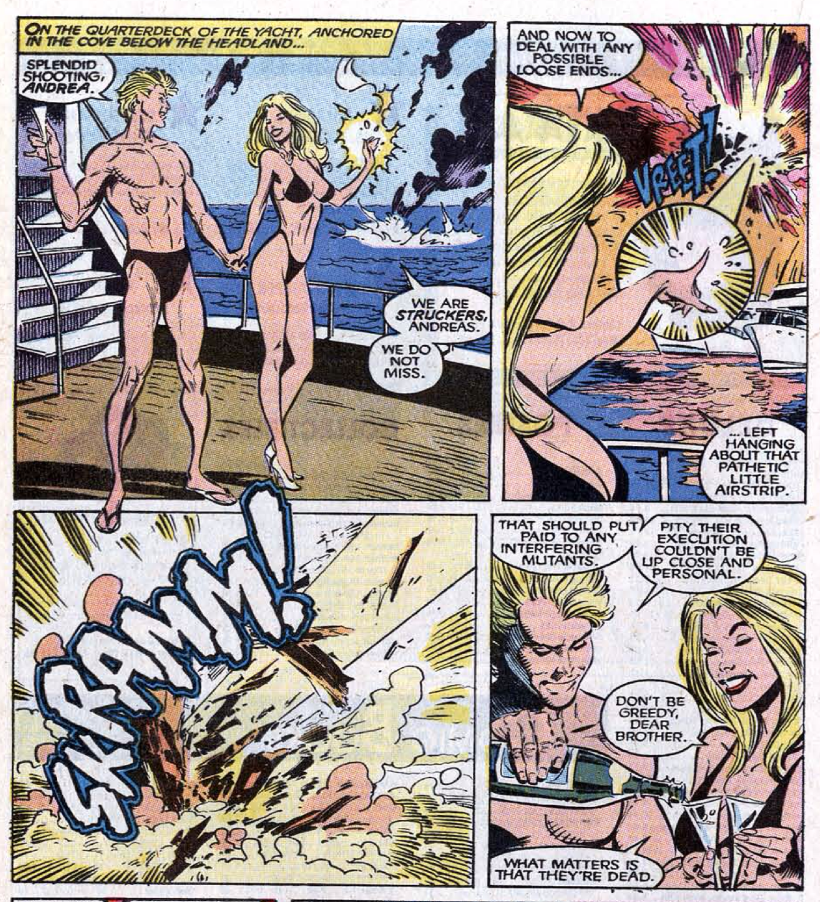 In addition to Freddie and Eric Beale, who appeared last issue, Roman Nebokah, the director of Dazzler's movie who appeared in the Dazzler: The Movie graphic novel, pops up in this issue.

Jim Lee provides the cover to this issue. Maybe it's just the coloring, but his Eric Beale has always struck me as looking nothing like the one who appears inside the issue.

A Work in Progress
Peter Nicholas saves the model with which he's become infatuated once again, this time from a group of muggers wearing X-Men masks. Sad masks seem familiar to Peter, particularly the Colossus one, making him feel as though he knows the X-Men. 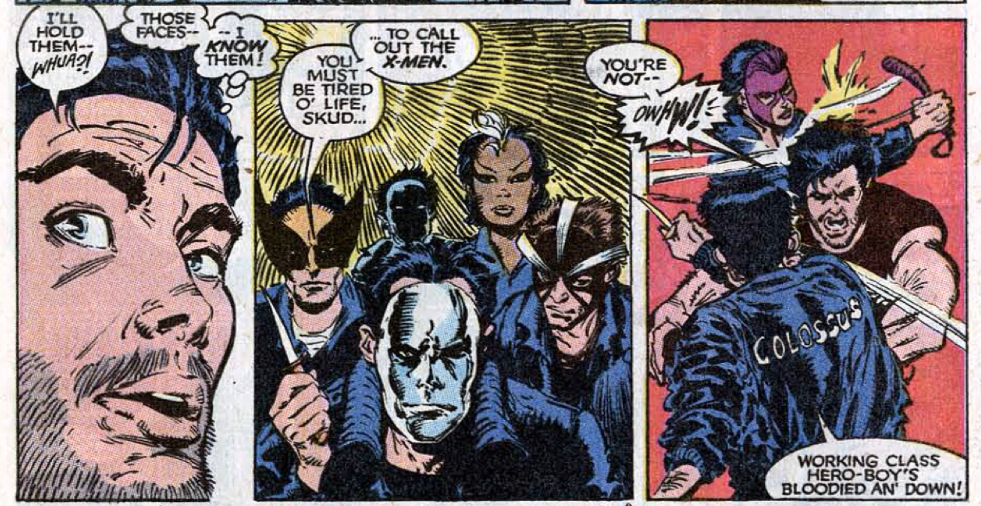 Banshee continues to worry about the change that's overcome Moira. 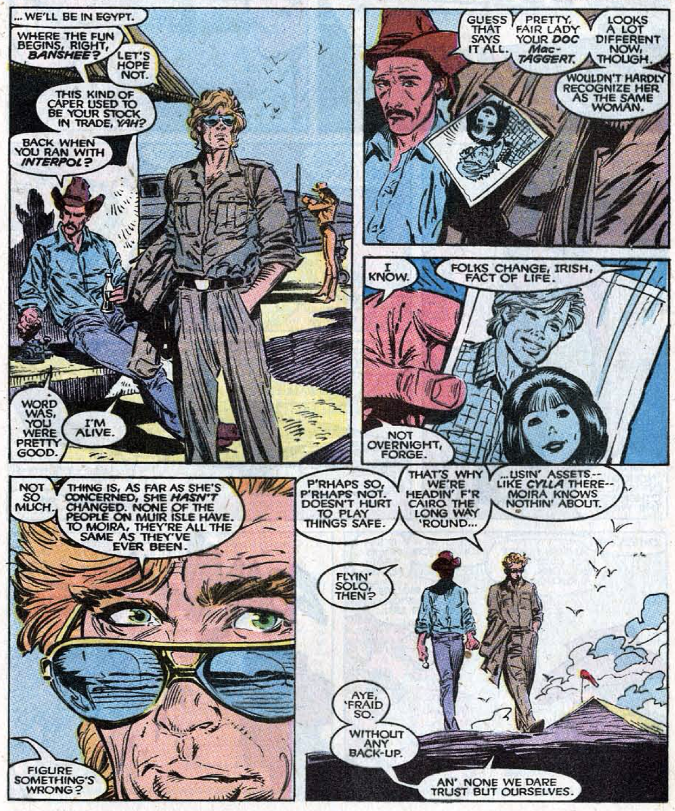 Somewhat ironically, Banshee and Forge use the attack on them by Fenris to let the world think they're dead, so they can more easily search for the X-Men (Banshee is also talking and screaming again in this panel). 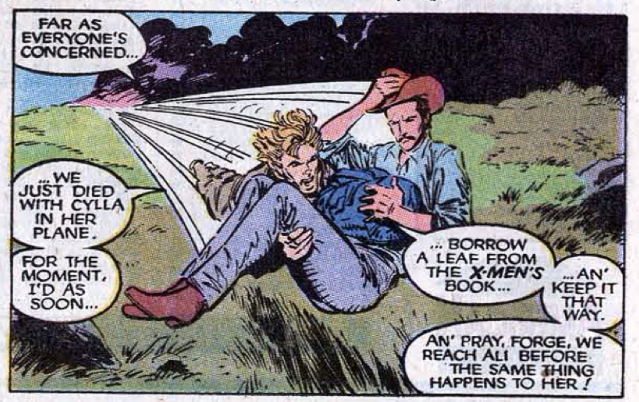 Dazzler discovers she can use her powers soothe and calm people, giving her new purpose as she decides to go out into the world and help people in pain. 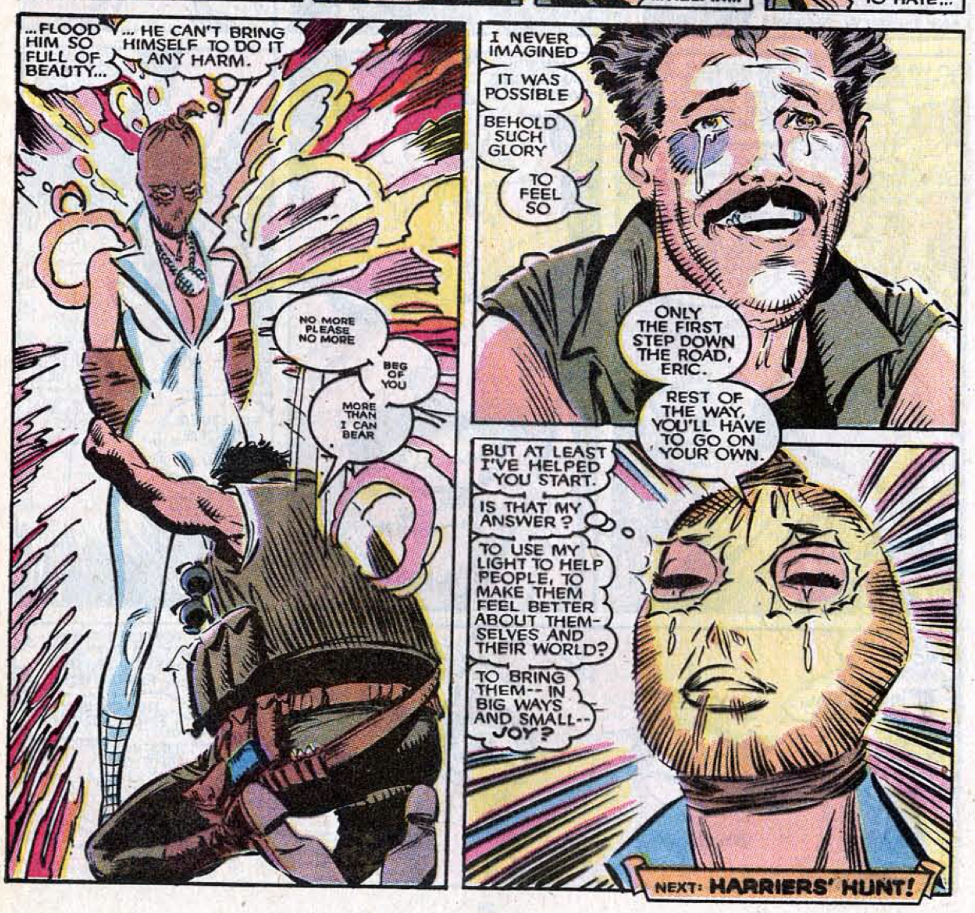 Claremontisms
On the opening page, Eric targets one of his Dazzler mannequins and declares "Bang, you're dead".

Teebore's Take
As an issue of X-Men, this is perfectly acceptable stuff: the post-Siege Dazzler gets the spotlight and finds a new purpose post-X-Men (albeit one that doesn't seem all that different from her role as one of the X-Men, ie using her powers to help people), some subplots get advanced, the Silvestri/Green art is well done, all is good. But in hindsight, as the swan song of a character who, between her own solo series and her role in one of Marvel's top-selling titles, was prominent in the Marvel Universe for almost ten straight years, it's something of a disappointment.

Regardless of how different, in function, using her powers to make people feel better is from using her powers as one of the X-Men, Claremont was clearly setting up a new status quo for the character with this ending, one that would, seemingly, return to the idea of Dazzler as a celebrity superhero. But nothing ever really comes of that idea, in X-Men or elsewhere, and like her former paramour Longshot and his similarly abrupt departure, Dazzler herself mostly disappears from the Marvel Universe, barring a few brief guest appearances, for over a decade after this. As a result, it's hard to read this issue and not think the pages could have been better used either on another character, or by giving Dazzler a proper sendoff, instead of a new status quo that ultimately turns out to be a false start.