How I Met Your Mother 9x07: No Questions Asked 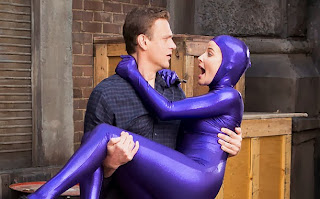 This was a pretty broad, hijinks-y episode, though fortunately, most of those hijinks worked for me (in particular, all the largely-unexplained stuff surrounding Robin in a body suit, carrying a golden gun, despite my better judgement). It also addressed two important character beats: Marshall realizing he can't lie to Lily, and Robin and Barney realizing they need to work on being a couple and not a pair of lone wolfs in a relationship together.

Both realizations are long overdue, though the former is perhaps excused by Marshall's displacement from the other characters (which remains a problem in and of itself). The latter's delay is patently ridiculous: the conversation between Robin and Barney was fine, and necessary, but it should have happened before they got engaged, let alone two days before their wedding. It's good the writers addressed it (better late than never) and it remains to be seen if anything actually changes between them, but the fact that it took this long for the show to address it is pretty sad.

Other Thoughts
Structurally, I did like the way the hijinks escalated opposite of the order Marshall called people. Even though everyone ultimately ignored the fact that Lily's door was unlocked (another solid gag), the idea of Ted climbing a drain pipe and jimmying open the window quickly paled in comparison to the intricacies of Robin ordering room service for Lily, sneaking in aboard the cart, then destroying the message while Lily argued at the front desk

And, of course, when Robin and Barney did team up, their plan for deleting the message was suitably the most over-the-top of them all.

Loved the documentary on Deerduff the Hooker.

That was Rhys Darby playing the night clerk, who was Murray on the phenomenal Flight of the Conchords. Hopefully he'll be back when the season reaches Saturday night.

Couldn't Ted have just asked for Lily to hand him her phone without looking at it, no questions asked, then deleted the message and handed it back to her, instead of having her destroy it? She couldn't even ask him what he deleted or why, because...no questions asked. I suppose destroying it was the bigger, flashier choice for a broader episode, but still. It's okay to reign it in and go for believable sometimes.

Next episode: the Mother is back, just in time for November sweeps (good), but so is the Robin/Barney's Mother feud (bad).

Narrator: Others say Deerduff the Hooker was just a popular male prostitute who murdered no one and died of syphilis

Barney: Air ducts! I’ll use the system of air ducts to get into her room, just like the bad guy in Die Hard!

Barney: Courtney Dove! I lost Kurt Coobain, I can’t lose you too!