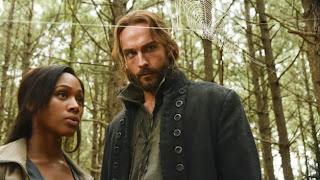 Something kinda cool I realized about this show watching this episode: not only does this show have an African-American female lead who isn't romantically involved with the other lead, but one of the (presumed) supporting characters is also an African-American female, and at multiple times this episode managed to pass the Bechdel Test. Neither of those things should need to be commented on in this day and age (they should just be), but unfortunately, they do, and its kinda neat the way this show can be somewhat unique on TV even beyond its batshit crazy plot elements.

I also like the idea that Jenny is all-in on this craziness, was a confidant of Sheriff Clancy Brown, and traveled the world becoming a freedom fighter. In part because I have a soft spot for uber-effective badass characters, and also because it makes it harder for the show to back down the "no one believes Crane and Abby" road.

The idea of revealing the Boston Tea Party to have been part of Crane's secret mission is pretty obvious, though the show is being a bit inaccurate in suggesting it was a cover for a mission critical to the war effort, as war hadn't really broken out between the Colonists and the British at that time (things were still at an "escalating tensions" point). Also, calling Milton's "Paradise Lost" a theological text is a bit of reach, but hey, at least people are saying "Book of Revelation" now.


I have a Halloween playlist I listen to every year around this time, filled with songs with direct connections to Halloween or Halloween characters (like "Monster Mash" or "Werewolves of London"), film scores to horror or Halloween-y movies (like Halloween) or scores that just sound like creepy Halloween music (most of Danny Elfman's oeuvre). Any particular songs or film scores that remind you of Halloween?


Marvel's Agents of SHIELD: Eye Spy
I appreciate that in addition to the ongoing mystery of what exactly happened to Coulson after The Avengers, this episode introduced some new mysteries that can bubble beneath the surface of the show: what the info on that wall meant, and who wanted it. I also liked the twist that the handler was as much a pawn as the former SHIELD agent. And Ward being forced to seduce a guy, which was probably the best use of the character yet. 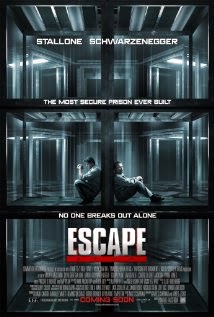 I was able to get some free passes to a sneak preview of Escape Plan, the new Stallone/Schwarzenegger movie, at Fallcon, so me, the missus, Dr. Bitz and some friends checked it out earlier this week. It was actually pretty great. I mean, objectively, it was actually pretty awful, but it was goofy fun, a throwback to the relatively straight-forward action movies that were once both stars bread-and-butter. The script had some pretty big plot holes in it, and the whole thing kinda fell apart in the third act when it devolved into a pretty standard action movie shootout (which wasn't particularly well directed), but the supporting cast is strong, and it strikes the right balance between "camp" and "taking itself too seriously". I don't know that I'd have wanted to pay money to see it, but it's worth the time it would cost to watch it.


Modern Family: The Late Show
As funny as this show can be, it often struggles with the fact that the writers seem to love generating humor from having the characters (usually the adults) be unlikeable jerks. Claire has been written as little more than nagging shrew for several seasons now, and for the most part that's just become background noise to me, but pretty much everyone except Phil was cast as a jerk in this episode (and Phil was still something of a baby. But that tiny suit healed all wounds). I wanted to scream at everyone to quit being so damned selfish and sit the hell down so Jay could get his steak.

There was plenty of funny stuff around the margins (Claire and Mitchell wearing the same outfit, the brief cutaway to the kids at Jay's house, Gloria repeatedly disappearing just to make an entrance whenever someone new appeared, Phil's aforementioned suit), but most of the time, I was just reminded of the show's tendency to make me wonder why any of these characters like each other.


The Big Bang Theory: The Raiders Minimization
This was a maddening episode. First of all, I find it hard to believe that none of the four main characters, all highly intelligent and steeped in geek culture, have never before either thought of themselves or encountered online the apparent plot hole in Raiders of the Lost Ark (that Indiana Jones wasn't actively involved in the defeat of the Nazis - had he never gotten involved, they still would have had their faces melted off when they opened the arc) which creates the inciting incident of the episode's A-plot.

Secondly, I don't think it is a plot hole, and I'm really confused as to why the realization was so devastating to the characters. For one thing, Indiana Jones was on hand to retrieve the Ark after the Nazis were destroyed, and while it didn't end up in a museum like he wanted, it probably shouldn't be in a museum, and at least at the end of the movie, its locked away safe, where neither Hitler nor anyone else, having now learned that opening it directly has devastating consequences, will be unable to experiment with it further in an attempt to harness its power. For another, why does Indiana Jones have to save the day for the film to be enjoyable? Protagonist success isn't a requirement for a good story, and Indy experiences small victories and character growth along the way, so he isn't a stagnant protagonist (which would make for a bad story).

The rest of the episode was a perfectly fine episode in the "Sheldon becomes a real boy" subset of episodes (I was hoping the lesson he would learn after trying to ruin Little House on the Prairie for Amy would be that its possible to enjoy something despite any historical inaccuracies or plot holes it may have, but learning not seek revenge when someone you care about makes you angry is a good lesson too), but I'm really confused as to why the idea central to the plot has the effect it does on the characters.


Speaking of Raiders of the Lost Ark, Bravo's been playing it off and on the last few days, and I watched a bit of it last night as I was putzing around with some other stuff. I sometimes forget just how good a movie it is... 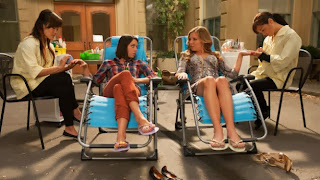 Casting Sam Elliot as the anti-Ron is sheer brilliance. Also, I think my favorite part of this episode was April's strange fascination with Tynnrfer even as she expresses hatred for year. Any time April adopts a new persona its fantastic, and the fact that Tynnifer never caught on that April was mocking her the entire time makes it even better.


Things of Note Still on My DVR
Pretty much the same stuff as last week.

Quotable Quotes
The Big Bang Theory
Sheldon: Amy ruined Raiders Of The Lost Ark for me, so now I’m trying to find something beloved to her and ruin that.
Howard: Because her life wasn’t enough?

Parks and Recreation
April: She’s the worst person I’ve ever met. I want to travel the world with her.