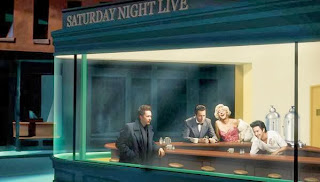 I'm surprised that Edward Norton has never hosted before. I know he has a reputation (alluded to in his monologue) for being a finicky, controlling method actor, so I could definitely see him thinking that doing SNL is below him. But then he randomly shows up to host, not even to promote anything specific, so maybe he was just never asked before? Or maybe he did need thirteen years to prepare...

Anyways, he handled himself pretty well - there were a few times where he seemed to stumble on some lines, but it wasn't clear if he was or if if was just he way he was playing the character - and was given a fair amount of work to do. This was a fairly consistent episode, with very few studs or duds, so to speak. Pretty much all the sketches had at least one flaw (if not more), but most also had at least one or two entertaining moments as well.

Other Thoughts
Continuing the season's trend, this was a night light on recurring sketches, with only one (the Steve Harvey bit), and even that was more of a recurring character than a sketch (and, at that, was just a means to deploy some relatively amusing Halloween costume gags).

Norton's opening monologue was good (never a bad thing to see Alec Baldwin on the set) right up until Miley Cyrus showed up, which felt horribly forced. SNL already addressed her role in the current zeitgest when she hosted a few weeks ago. If she hadn't already done that, her pop-in would have been fine. As it was, it felt unnecessary and repetitive.

After complaining about it for a few weeks, nice to see Nasim Pedrad star in a sketch (and the first post-monologue sketch to boot). Plus, it was probably my favorite non-pre-filmed sketch of the night.

Weekend Update was surprisingly short - only one guest, and only about a third of the usual material. Yet the show didn't seem longer elsewhere to make up for it - was there an extra sketch somewhere? I know they had that weird little bit with Edward Norton jamming on the guitar, but that certainly didn't eat up all of Update's usual runtime.

12 Days Not a Slave succeeded largely on the strength of Aidy Bryant's character, and the gag about white people dancing (and here, Miley's pop in was much more effective, and would have been perfect if she hadn't already appeared in the monologue). This was a pretty representative sketch for the night: an original premise, some stuff that worked, some stuff that didn't.

The last sketch, with Norton playing a weirdo making cracks about candy, was a pretty standard end-of-the-night sketch, funny in places but more concerned with being weird. As such things go, it wasn't awful, but they usually don't do much for me (unless the specific weird they're going for hits me just right).

Least Favorite Sketch: That pseudo-Rain Man bit, which was about twenty years too late and seemed built around the idea that Edward Norton could do a credible Rain Man impression But then again, so can most people, so I dunno.

Favorite Sketch: Without a doubt, as a Wes Anderson fan, The Midnight Coterie of Suspicious Intruders. Even though the impressions were mostly limited to the visuals (aside from Norton's spot-on Owen Wilson), the bit completely nailed Anderson's aesthetic (having Baldwin on hand to narrate certainly helped. I want him saying "Midnight Cotrie" to be my new text alert), and probably takes the honor for the title alone.

Kathleen Sebelius: ...in six to eight weeks you'll receive an informational brochure, along with a trial version of Encarta Encyclopedia, plus 1000 free hours of AOL. Just don't install any of these programs while our website is running, or it will cause an actual fire.

Narrator: The New York Times calls it, ‘You had me at Wes Anderson.’ And Fangoria Magazine says, ‘Dah Fuh?'

Katherine: I'm sorry, but these have been the best 12 days of my life!

Dad: Now this looks like a Reese’s cup, but guess what’s inside? Kale chip! Gotcha, fatty.