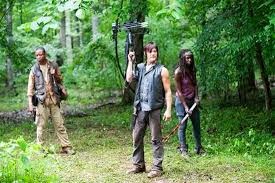 Rick and Company have fought many different enemies throughout The Walking Dead. They’ve battled zombies, other humans and even themselves. While they’ll probably never stop battling themselves, zombies nor other humans (in that order), they have found now themselves a new foe: illness.

Perhaps this is a story that needs to be told. Heck, part of me feels like this story should have been told sooner. Considering all the bumps, scrapes and bruises that have occurred (not to mention stabbings and gunshot wounds) I’m surprised people in the group haven’t died from infections yet. However realistic, though, watching people slowly die of the flu is just not compelling to me.

The reason it’s not compelling to me is the same reason it’s so scary and frustrating to the characters. Infectious diseases are so impossible to battle. I’m not saying you can’t overcome a disease or take precautions against getting infected yourself but, once you get it, there’s not much to do but drink tea (which, I’ll admit it, lead to a very inspiring and well-acted speech by Hershel) and hope you don’t die. There’s no punching, shooting or outsmarting this foe. There’s just waiting it out.

The Walking Dead tries to mitigate this fact by giving some characters a more tangible objective in the form of a panacea fifty miles away. This leads to the obligatory car getting overrun with zombies scene. There was some nice action and Tyreese got his time to shine (taking a cue from the comic) but it certainly felt like been-there-done-that territory.

The end result is that this episode didn’t lead us anywhere. We only got halfway to getting the antibiotic and the only character development was Tyreese deciding he can fight and Carol’s big revelation that she's a dumbass. The rest of the episode was people coughing themselves to death. The sooner we can move on from that the better.

Other Thoughts:
I’m fairly critical of burying bodies during an apocalypse since it seems pointless to me. But I suppose I can let it slide when you can do it safely within the walls of a prison field. Still, they might run out of space!

At least they’re keeping the sick people in jail cells so if someone turns into a zombie they won't be roaming free. The characters are learning! That officially puts them on par with velociraptors. Hey, progress is progress.

When the little girl, Lizzie I believe, said she was feeling sick it almost looked like she was faking it. I'm not sure if that's the case for some reason or if it was just bad acting.

I understand Tyreese wanting to catch the murderer but Rick is right. Dealing with the plague was more important at the moment. But I'm not sure Rick's fist were the best tools to use to make the point.

It’s nice to hear that Daryl would like to hunt down the Governor like Michonne but simply believes the trail is too cold to track.

I’m not sure what Hershel’s point about not killing the zombies because they didn’t need to was. The only good zombie is a dead zombie. Not that they’d have a way of knowing but what if one of those zombies ends up killing some innocent person? I could understand if Hershel simply didn’t want Carl to shoot the gun because it would attract unwanted attention from other zombies but that’s not the sense I got.

Michonne’s pension for decapitating zombies with her sword, while visually awesome, seems unwise. You need to cut through the head and slice the brain. Slicing at the neck seems like a sure way to get someone’s ankle bit.

Carol’s pretty much a sociopathic idiot. In case you’re wondering I’ve never been on the “Shane” side of things. The idea that all morals should be thrown out the window in favor protecting the few people closest to you just doesn’t hold water with me. But Carol is even worse than Shane because not only is Carol morally dubious but she’s also, apparently, really stupid.

First, I should point out that I believe that Karen and David were still alive but sick with flu-plague. Carol stabbed them to death and dragged their bodies outside to burn them in order to protect the rest of the group from the plague. Now, I can get behind a debate of the good of the many outweighing the good of the few but…what good did this bring at all? There’s making a tough decisions and then there’s making a dumb decision.

Obviously Carol’s plan didn't work since the plague still spread. But not only did it not work but it had no chance of working. Firstly, the odds of others already being infected were huge. Maybe she never took high school biology but I'd hope she'd know that just because someone isn't showing symptoms of an illness doesn't mean they're not infected. Maybe it'll take a day or two to show signs or maybe they're a carrier.

Secondly, by killing these two infected people and dragging their bodies around she was highly likely to get infected herself! Then she is walking around the healthy people like it's no big dead. Carol needs to be jailed/executed/exiled. Whatever the policy is in the prison.