How I Met Your Mother 9x03: Last Time in New York 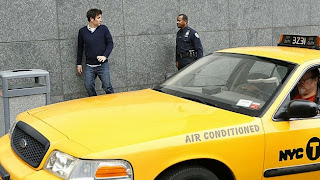 It was nice to have an episode with an A-story featuring Barney and Robin as a couple that didn't also paint them as borderline sociopaths. The fear of losing the "spark" in your relationship after getting married is a genuine (albeit somewhat sitcom-y) one, but it's certainly a fear that rings more true for characters like Barney and Robin, so building a pre-wedding story around it makes sense. Meanwhile, the B-story, beyond the sword fights, tainted scotch and Waldo-eque costumes tried to tug at the heart strings as Lily discovers Ted's "before I leave New York" to-do list. It's effective, as most "melancholy Ted"/"Lily lectures Ted" stories are, though the effectiveness is somewhat undermined by the fact that we know, ultimately, that Ted won't leave New York.

Other Thoughts
Marshall's C-plot, thankfully, didn't feature another hiccup on his road trip back to New York, instead going for straight laughs as he makes his way through Packer country. Considering the Minnesota/Wisconsin rivalry is one I know all too well (Wisconsin is indeed "a hellish cheese-infested wasteland", though the cheese is quite good), I found most of these sequences pretty damned hilarious.

I especially loved Marshall's Vikings horn, and the fact that Ted knew Marshall was in Wisconsin just by overhearing it on Lily's phone.

Continuing the gag of Lily automatically getting a new drink from Linus is a nice touch, though I do wonder A. how she can afford that many drinks and B. why she isn't falling over, completely snockered.

I guess I never realized Mandy Patinkin was such a draw for old people. Granted, I'm a fan, and my wife will tell you that I often act like I'm much older than I am, but I like him for his roles in Princess Bride and Dick Tracy, as well as his Broadway stuff, none of which I think of as being particularly old person bait. And I can't imagine old people love Homeland, so it must just be his time on Chicago Hope and Criminal Minds (two shows I've never watched).

On the flip side, while I realize it's terribly juvenile, the old "let's have sex somewhere different, no, I didn't mean that" gag never gets old.

Ted drinking the scotch/chocolate sauce/ketchup/hand sanitizer concoction and not realizing it's anything but scotch despite its (presumed) awful, awful taste and consistency is so Ted.

Marshall's point about Fezzik in Princess Bride was spot-on and, like Ted, something I hadn't really considered before. That whole sequence was great.