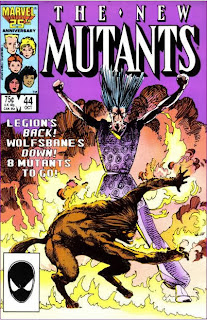 In a Nutshell
The New Mutants fight Legion.

Plot
Rahne is visiting Moira in Scotland when a piece of lab equipment suddenly falls over, threatening to crush Moira. Rahne does her best to push her out of the way, but Legion is nearby and David Haller is forced to hand over control of his body to his Jack Wayne persona in order to telekinetically save Moira and Rahne. Refusing to be caged again, Jack sets off an explosion in the lab and runs off. In New York, Dani is suddenly awoken by Rahne's pain, felt through their psychic rapport. She tries calling Muir Isle but doesn't get a response, so she gathers the rest of the New Mutants and explains the situation. With Magneto away, Illyana teleports the team to Scotland, but they arrive later in the day. 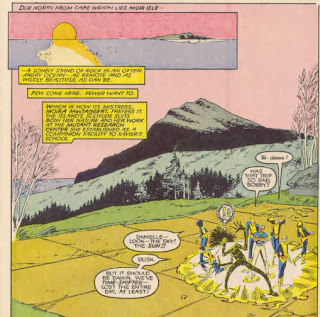 Amidst the wreckage of the lab, they find an unconscious Rahne and Moira, and after reviving them, the New Mutants set out to bring Legion home. They track him to a bar in Ullapool, Scotland, where Cannonball and Karma, whom Legion has never met, enter in disguise. Karma is able to take control of Legion, but a scuffle in the bar breaks her concentration and an enraged Legion attacks the New Mutants. He escapes once more, but the New Mutants follow him to a nearby oil refinery. Sunspot manages to tackle Legion, at which point Magik teleports them both to Limbo. There, she threatens Legion until Jack Wayne turns over control of Legion's body to David Haller. With David back in control, Legion and the New Mutants return safely to Muir Isle.

Firsts and Other Notables
Legion returns, and despite Xavier's promise to his son in issue #28, this is only his second appearance following the initial storyline that introduced the character. He'll next pop up in Uncanny X-Men #254.

A panel from this issue was the subject of a recent Comic Book Legend Revealed, debunking the notion that the pane was drawn from an adult magazine. Read more about it here.

The Chronology Corner
A footnote points us to Web of Spider-Man Annual #2, which technically takes place after issue #42 and which we'll look at in couple weeks (assuming I can find a copy...).

Additionally, the New Mutants next appear in New Mutants Annual #2, but we'll be examining issue #45 first.

Illyana mentions that the further distance she teleports, the greater risk there is that she could end up in the wrong place or time. While that general idea is well-established, I'm not sure the whole "distance makes it harder to get right" idea has ever been laid out like that before. 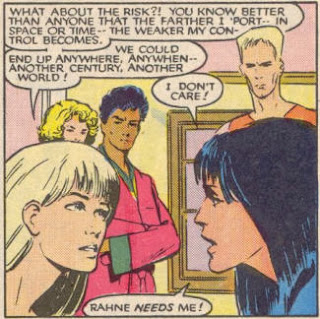 Sam is back to wearing Lila Cheney clothes around the mansion.

Roberto's fear of both Illyana and Limbo is played up throughout the issue. 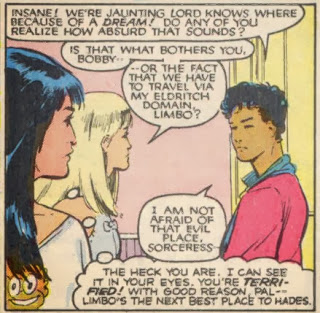 The New Mutants use a set of the X-Men's micro transceivers to communicate with each other while in Scotland.

We haven't seen him in awhile, so I suppose it's understandable that we're once again reminded of how Sunspot is super strong but not invulnerable. 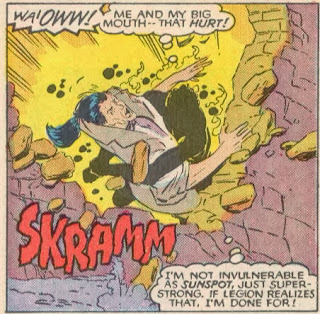 Reverend Craig, Rahne's fundamentalist foster father who believes mutants are children of the Devil, pops up spouting his usual nonsense, and prompting Rahne to declare that she wouldn't mind if the whole town was destroyed by Legion as a result. 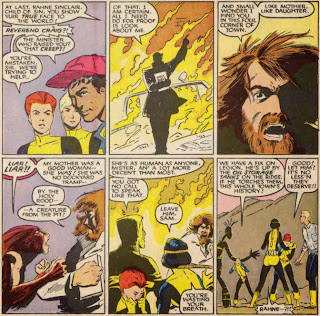 I Love the 80s
We get a nice, concise tutorial on Legion and how his powers work, for any new readers who may have missed his first appearance. 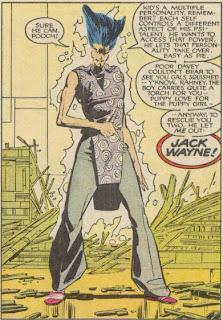 Similarly, while it's understandable from an exposition stand point (because it allows the reader to be informed while the characters are), it doesn't make a whole lot of sense that while half the New Mutants were present for the adventure with Legion in issue #26-28, they wouldn't have filled in their absent teammates about Legion at some point after they returned to the school, particularly the fact that he's Professor Xavier's son (and, of course, Illyana also knows that Professor X has a son, because she was with Moira when Moira learned about David in issue #1).

As Dani makes contact with Rahne early in the issue, she's wearing a Fraggle Rock t-shirt.

Teebore's Take
Of all the stand alone done-in-one issues that populate this stretch, this is the one that feels the most like a fill-in, despite the involvement of the entire regular creative team. The idea of having Professor Xavier's son interact with his figurative children is a good one, but it probably would have worked better if either Professor X were still around, or he'd ever spent any significant time with Legion. Instead, with this being only the second appearance of Legion, following his introduction, there's not a whole lot of thematic resonance to the story (beyond reminding us again what a crappy father Xavier is), the end result being a fairly generic action story in which the New Mutants fight a foe who they ultimately don't want to harm (which is perfectly serviceable but pretty routine). The end result isn't terrible, but is a definite letdown in the midst of an otherwise strong run of issues.

Next Issue
Tomorrow, Rusty meets Skids in X-Factor #8, while next week the Mutant Massacre gets a prelude in Uncanny X-Men #210 and the New Mutants star in a Very Special issue in New Mutants #45.
Newer Post Older Post Home
Posted by Austin Gorton at 1:00 PM