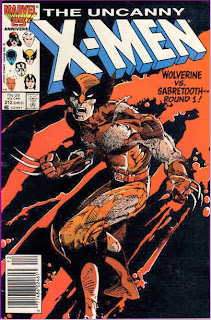 In a Nutshell
Wolverine battles Sabretooth in the Morlock Tunnels.

Plot
In the Morlock Tunnels, Wolverine stalks amongst the dead, seeking a Marauder to bring back to the mansion for questioning. At the school, the X-Men, led by Moira and Sharon Friedlander, work feverishly to save as many of the wounded Morlocks as they can. Storm, checking in on the permanently-phased Kitty and the comatose Nightcrawler, suddenly has a crisis of faith and runs off, out onto the mansion's grounds. Colossus attempts to go after her, but suddenly collapses. Psylocke is able to telepathically determine that he's still alive, while Magneto uses his power to see that Colossus is leaking energy through all the wounds he received from Riptide. In the tunnels, Wolverine once again picks up the scent of X-Factor, and his confusion over the seeming presence of Jean's scent allows his old foe Sabretooth to get the drop on him. Back at the mansion, Magneto is able to repair the damage and return Colossus to consciousness, but he is unexpectedly paralyzed. 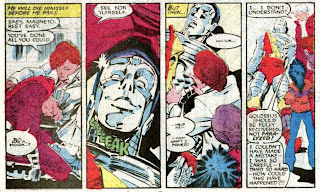 Meanwhile, Wolverine realizes that Sabretooth has captured the Morlock Healer, and goads him into a fight to keep his attention away from the Healer. Elsewhere, Callisto tracks down Storm, and forces her to face her responsibilities as the leader of both the X-Men and the Morlocks, telling Storm that if she quits now, that if Xavier's dream isn't worth fighting for, all the blood that's been spilled will have been for nothing. Back in the tunnels, the fight between Wolverine and Sabretooth rages until Wolverine is able to bring a portion of the tunnel ceiling down on Sabretooth, cutting the fight short in order to get the Healer to safety. He returns to the mansion, telling Rogue when he arrives that he picked up the scents of the New Mutants in the tunnels. However, before they can investigate, a blast of energy suddenly fills the tunnels, scouring it clean, and Wolverine realizes that if the New Mutants were anywhere in the tunnel when that blast went off, they're dead.

Firsts and Other Notables
After appearing as a member of the Marauders in X-Factor #10, Sabretooth makes his X-Men debut this issue, beginning a long-standing association with the title as an antagonist of the team in general and Wolverine specifically, and even, eventually, an occasional member of the team. 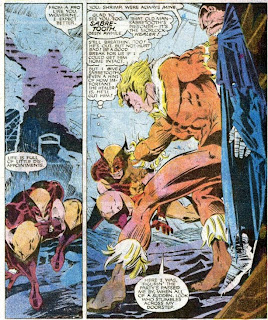 Sabretooth first appeared in Iron Fist #14 as a generic mercenary character, and, interestingly, as detailed here, his face as it appeared in that issue was originally created by John Byrne as a design for Wolverine's unmasked face. As detailed here, Claremont and Byrne had plans to establish Sabretooth as an old foe of Wolverine's long before this issue (including the idea that Sabretooth is Wolverine's father, something Claremont will continue to tease throughout his tenure before a later writer ultimately establishes that they are not related) that were ultimately scuttled by Byrne's departure from the title. Also, as detailed here, Claremont has said that he intended to reveal that most appearances of Sabretooth (including in this issue and the next) were actually clones of the original created by Mr. Sinister, in order to explain how Wolverine is able to beat him while also allowing the real Sabretooth to consistently outclass Wolverine.

In the course of the issue, Colossus collapses, and Magneto uses his power to view the world in terms of energy patterns, thus determining that Colossus is suffering from wounds inflicting by Riptide despite being armored. Magneto is able to heal him (by essentially repairing the holes in Colossus' metal skin), but when Colossus awakens, he is unexpectedly paralyzed, making him the third member of the team, after Shadowcat and Nightcrawler, to be sidelined as a result of the massacre. 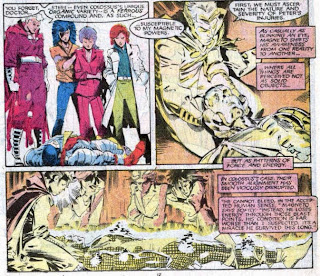 The leader of the Marauders gets a name, Mr. Sinister, the first time that character is identified in a comic, and the massacre is given a vague reason for occurring: the Morlocks are wild cards, and Mr. Sinister doesn't like wild cards (this more or less fits with the ridiculous retcon that reveals the true motive behind the massacre, established in the mid 90s).

The X-Men learn in this issue that the New Mutants snuck out of the mansion and entered the tunnels, though the subsequent energy blast and their overall disappearance (as we'll see in New Mutants #47, they escaped first to Limbo, then elsewhere) ultimately leads them to believe the students have been killed. 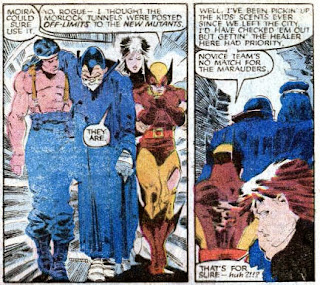 The blast in question was triggered by Thor in Thor #373, as an attempt to give the fallen Morlocks a Viking funeral by incinerating their bodies (and also, conveniently, purging the tunnels of dead and decaying bodies, so future stories can be set there without having to deal with all that). 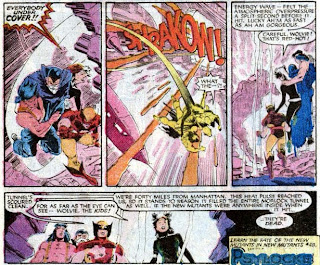 Dan Green returns to ink the issue, while Rick Leonardi fills in on pencils, beginning a stint in which he'll essentially serve as the book's go-to fill-in artist.

The corner box on the cover has been updated, removing Rachel.

The Chronology Corner
Wolverine mentions encountering Power Pack in the tunnels between last issue and this one, which occurred in Power Pack #27 (though a footnote wrongly cites Power Pack #29).

A Work in Progress
It's established that the Morlock Tunnels have psionic barriers surrounding them, making it difficult (but not impossible) for Psylocke to telepathically reach Wolverine while he's in the tunnels. This presumably also explains why neither Xavier nor Cerebro detected the Morlocks prior to the X-Men's first encounter with them. 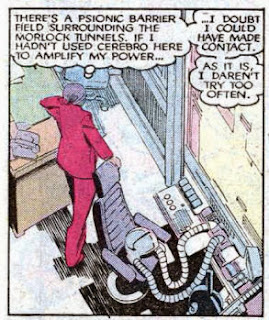 Kurt remains in a coma, while Kitty is still unable to unphase, and is being contained in some kind of large jar. She is described as being a "living ghost"; presumably this means she doesn't need to eat or drink, or else she'd be in danger of starving to death soon. 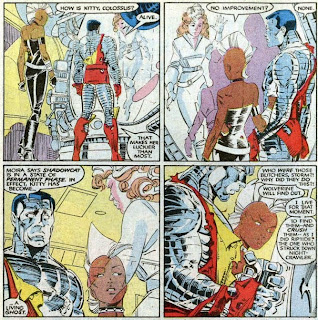 Tom Corsi is on hand (appearing in X-Men for the first time), helping stand guard over the mansion's entrance to the Morlock Tunnels.

In a grim little detail, they X-Men are using their hangar as a temporary morgue. 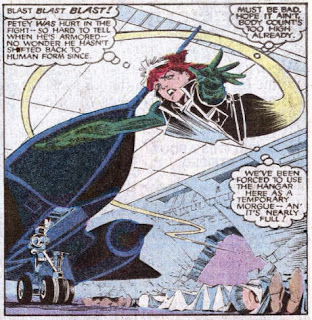 Wolverine once again detects the scents of the original X-Men in the tunnels (including Jean's), though he now refers to them as X-Factor and wonders why they're hunting down mutants, suggesting that Magneto has shared his discovery that X-Factor constitutes the original X-Men with, at least, Wolverine. 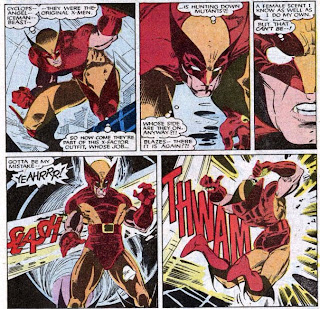 Wolverine rescues the Morlock Healer and brings him to the mansion, as Claremont wisely recalls that one of the Morlocks has a healing power that would come in handy now, and thus needs to be addressed one way or the other. Of course, we won't actually see the Healer heal anyone, and he won't next appear until issue #254, but at least we know he survived the massacre and was, presumably, healing some of the injured Morlocks off panel.

I Love the 80s
In a rather clunky expository scene, Psylocke telepathically contacts Wolverine and introduces herself, even though she's been hanging around the mansion for at least a few days, and the characters previously interacted in X-Men Annual #10. She and Wolverine proceed to have a conversation regarding Wolverine's goals (find a Marauder to interrogate) and what can be done to the rest (kill them) that rehashes his conversation with Storm which ended the previous issue. 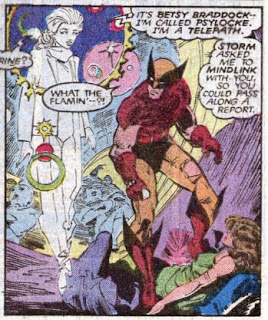 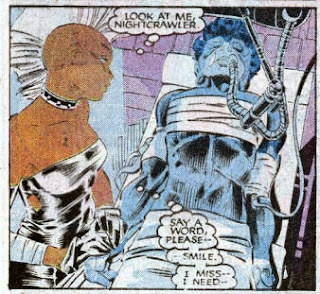 The Best There is at What He Does
It's established that Wolverine has a history with Sabretooth, and Wolverine asserts that while he's a man who sometimes kills, Sabretooth is a killer. 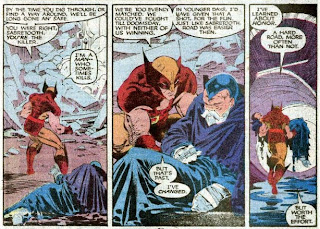 For Sale
I never played it much (neither I nor any of my friends had a set), but Lazer Tag was, as with most things involving lasers, never as much fun as it should have been. 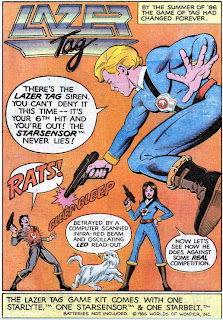 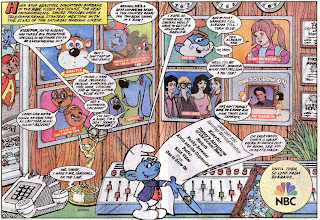 It's in the Mail
The letters page returns, featuring letters discussing issue #198(!), an issue which seemingly gets mixed reviews (the letters are split almost evenly between those who liked the issue and those who didn't, though of course, there's no guarantee this is a representative sampling of all the mail the X-office received regarding the issue).

A response to one of the letters teases an upcoming story called "Unfinished Business", which is intended to return to the the Storm/Forge relationship. I'm not sure if this is a reference to the ultimately-aborted third "LifeDeath" story, or something else entirely. Regardless, this never comes to fruition, as Storm and Forge's story ultimately gets handled in the main title and plays an integral role in "Fall of the Mutants".

Teebore's Take
As mentioned in the previous issue's post, "Mutant Massacre" is both the prototypical X-Men crossover event and an atypical one, and one example of that is made clear in this issue: the entire story began and climaxed last issue, as X-Men #212, only one issue after the story started in earnest (or two, or five, depending on how many of the tie-ins you're reading), starts the denouement, as the X-Men begin to deal with the ramifications of the massacre and the changes it has wrought. While the immediate tension and sense of dread relative to the previous issue is lessened, Claremont keeps the sense of despair on high and continues to make significant changes to the status quo: Kitty and Kurt remain out of action, Storm suffers a crisis of confidence, Colossus almost dies, then ends up paralyzed, the leader of the Marauders gets a name and a vague motivation, the New Mutants have gone missing, and Wolverine encounters a new (old) foe.

It is this last item that makes this issue standout (and, once upon a time, helped skyrocket its price on the back issue market): the beginning of the Wolverine/Sabretooth rivalry. At this point in his history, Wolverine is clearly the fan-favorite, breakout character of the series, but the creation of this relationship with Sabretooth (which immediately is revealed to have been in place long before their encounter in this issue) is an important step in his transition into a leading character, capable of carrying in his own title (and, eventually, titles): with Sabretooth, Wolverine receives an archenemy, his Joker or Dr. Doom, a dark reflection of his character. One can certainly quibble about whether Wolverine's rise to superstardom is ultimately a good or bad thing, but that rise is inarguably a significant event in the history of the X-Men's narrative, and an important step in the development of his character. In fact, the most surprising part of the Wolverine/Sabretooth relationship, especially given how significant it becomes, is that both characters existed for as long as they did without it.

Next Issue
Tomorrow, the New Mutants meet and old new friend in New Mutants #47, then X-Factor deals with fallout from the massacre in X-Factor #11, and next week, more fun with Sabretooth in Uncanny X-Men #213.
Newer Post Older Post Home
Posted by Austin Gorton at 12:00 PM