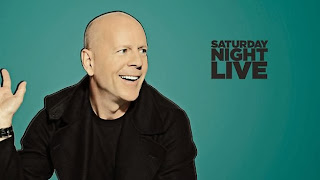 Well, that was not a terribly good episode. Most disconcertingly, there was really only one or two non-pre-taped sketches, at best, that were even halfway decent, which is never a good sign. Bruce Willis wasn't an awful host - he was pretty good, actually. He seemed to have a sense of humor and was up for anything, and showed some real skill at sketch comedy (how many hosts are likely to have a Michael Kors impression in their back pocket?). But unfortunately, the writing seemed incapable of making the most of his talents.

Other Thoughts
I can't believe this is only Willis' second time hosting (his first time back since 1989!). Not only is that a lot of fairly significant movies he never showed up to promote, but the guy actually has some comedic chops, so it seems even more unfortunate the show hasn't used him more often.

One of the few actual live sketches that worked for me was the Lady Gaga talk show. Like most celebrity-based talk show sketches, it's essentially a flimsy excuse for impersonations, but there's nothing wrong with that. Based on what I know of him from when I watched Project Runway, what Willis' Michael Kors lacked in authenticity was made up for by the performance. I wouldn't mind seeing this one again sometime, even if Bayer's Lady Gaga isn't as sharp as her Miley Cyrus (plus, Lady Gaga has enough humor inherent to her schtick, even beyond the iffy impersonation, that could help elevate this above other recurring talk show sketches). Though the Penelope Cruz impersonation, while still uncannily proficient, felt very tacked on. I'd rather have seen something new from McKinnon.

This episode brought back/reminded me they existed two recurring sketches that do very little for me: Kirby, the random guy in a room full of toughs who really likes his kitty, and whatever-the-hell it's called when Taran Killam plays that overgrown man-child who laughs at someone's verbal screw-up. Blech.

Whatever the hell that centaur sketch was, I'll give it this: it was a one joke premise, but when that joke was over, it wrapped itself up and moved on. It wasn't the greatest joke in the world, but props for not dragging it out even longer than necessary.

This was an oddly-paced episode. Both the cold open and the monologue were relatively short (plus the shorter-than-usual centaur sketch), leading me to think we might be getting a third Katy Perry performance, but then her second performance got shoved almost to the end. I wonder if those timing issues accounted for the random repeat of the E-meth commercial, or if something got cut at the last minute?

The generic new cast members gain some features: Brooks Whelan has tattoos (and thanks to the rerun, I now know was the naked guy in the E-Meth sketch), while that "Sigma" pseudo-Digitial Short featured a couple of other new guys, including the AT&T guy (like the other pre-filmed bits, it was also pretty solid).

Favorite Sketch: Easily "The Boys Dance Party", which generated the loudest and most consistent laughs from me. Willis went all-in for it, and all the guys really sold the hell out of the material.

Lady Gaga: I wore a turkey butt hat and walked around my house in smaller and smaller circles.

Sigma Guy 1: Alright, just a few more rules. If you guys bounce it and we swat it back and it lands inside one of your cups, you have to design your ideal roller coaster.
Sigma Guy 2: Grab some markers and some colored pencils and just start drawing. Disregard the laws of physics and create the coaster from your wildest dreams.
Sigma Guy 1: If we like it enough, we’ll put it up on the wall.