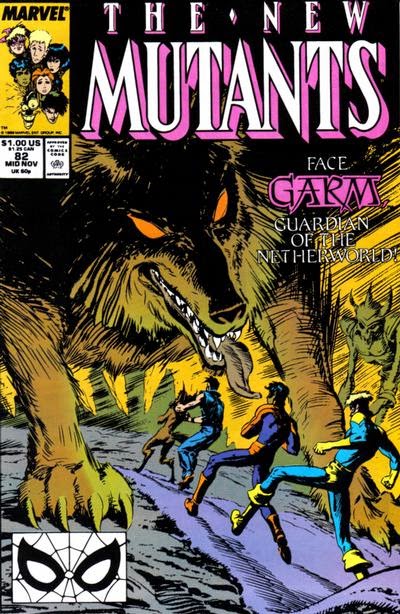 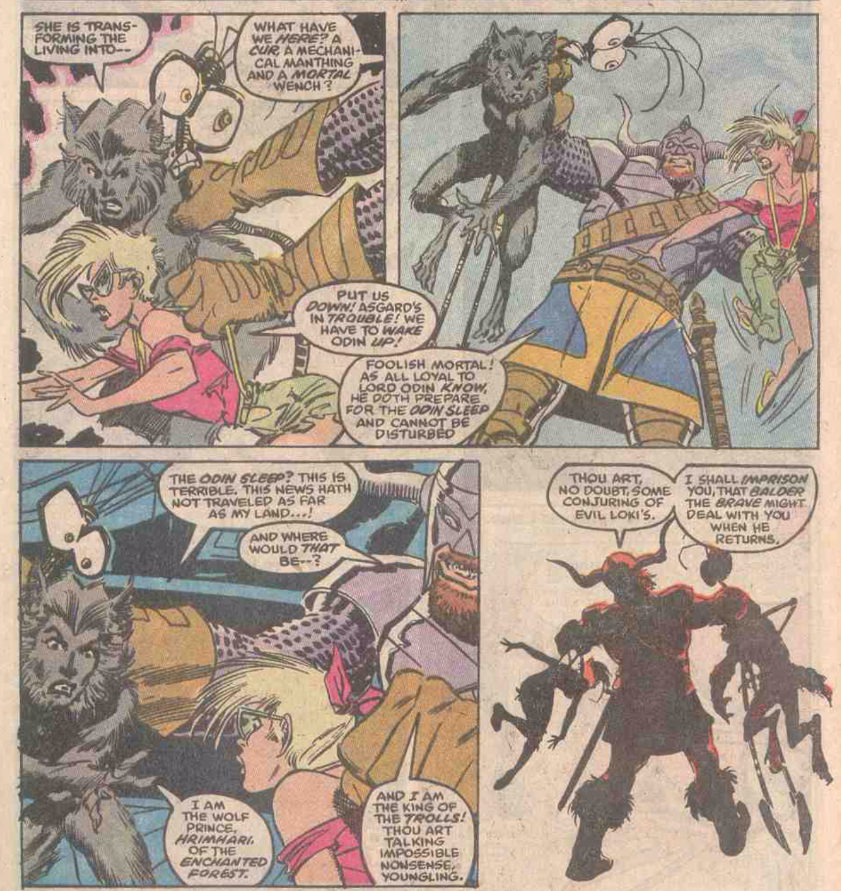 In Hel, Mist explains how her fairy blood is enabling her to fight Hela's control, and she takes the New Mutants on a shortcut to Hela's palace. In Asgard, Asgardian warrior Volstagg's children convince the captive New Mutants to break out and seek the help of a sorcerer named Tiwaz. Meanwhile, on Earth, an exhausted Skids collapses, dropping her force field and enabling Freedom Force to capture her and Rusty. In Hel, the New Mutants enter Hela's palace just as she orders Eitri to forge a magic sword for her. He refuses, but when Hela threatens his daughter, an enraged Sam blows the New Mutants' cover, leading to their recapture by Hela just as Boom-Boom, Warlock and the Wolf Prince, en route to Tiwaz, are captured by Frost Giants on orders from Hela. Eitri then agrees to forge her sword to spare his daughter and the New Mutants, and Hela declares that when the sword is complete, she'll send Dani to slay Odin with it, giving Hela control over his soul, and all of Asgard.

Firsts and Other Notables
Something which Dr. Bitz and I frequently joke about, this issue represents my first encounter with the "Odinsleep", the plot-convenient slumber into which Asgardian ruler Odin must periodically slip in order to recharge his vast power. This certainly isn't the first time in comics Odin has been unable to help because of the Odinsleep, but it's the first time I ran into it, and thus is my default mental example whenever the subject comes up (which is, relatively speaking, more often than you'd expect). 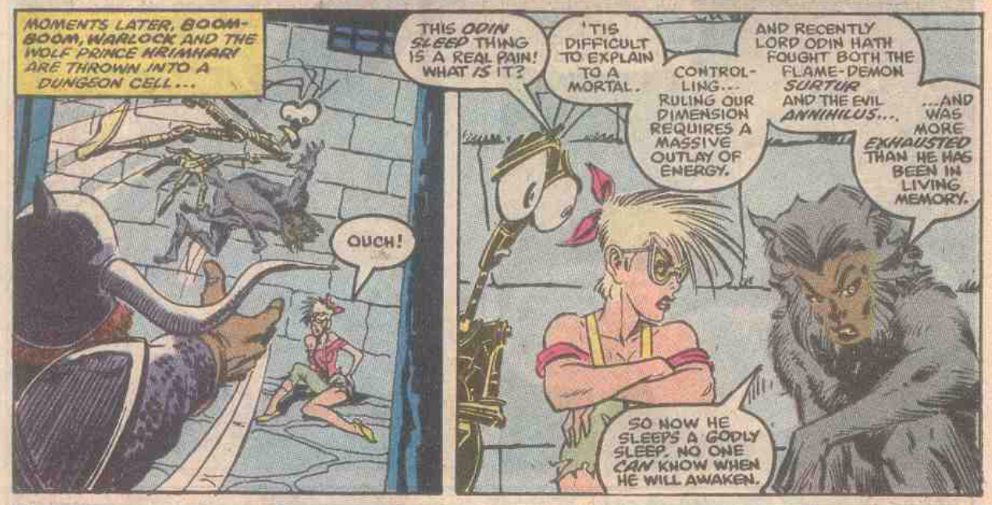 Rusty and Skids, having been carried off by Freedom Force after cutting out the ground beneath Skids' forcefield in issue #80, are now in custody, and Skids finally collapses from exhaustion, dropping her forcefield in the process, enabling Freedom Force to grab the pair of them. 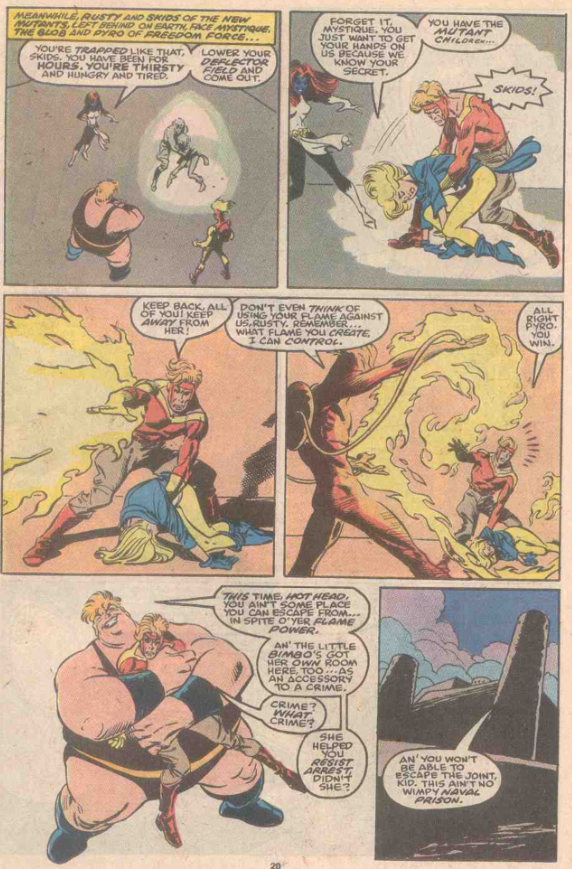 The children of Volstagg (the Voluminous), of Warriors Three fame, appear in this issue. First appearing during Walt Simonson's run on Thor, they convince Boom-Boom, Warlock and Hrimharri to break out of Asgardian jail to seek help, and willingly take their place in jail as a show of good faith. 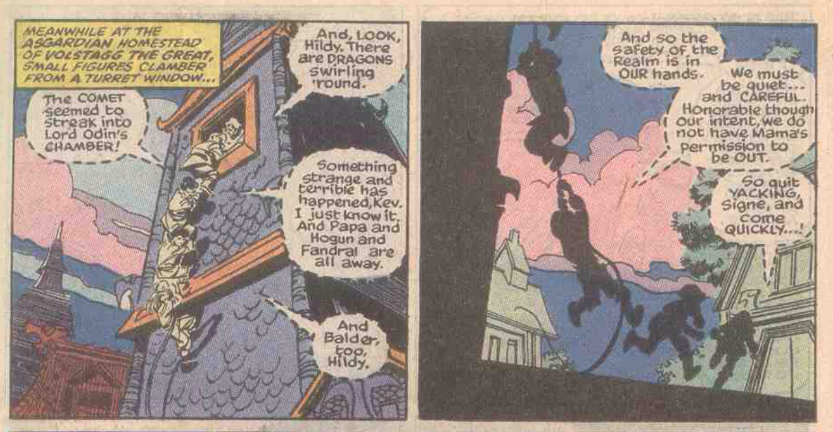 They also mention that their father is off on a mission with Thor, a reference, I believe, to Avengers #310, which was on sale at the same time as this issue and in which the Warriors Three appear along with Thor. 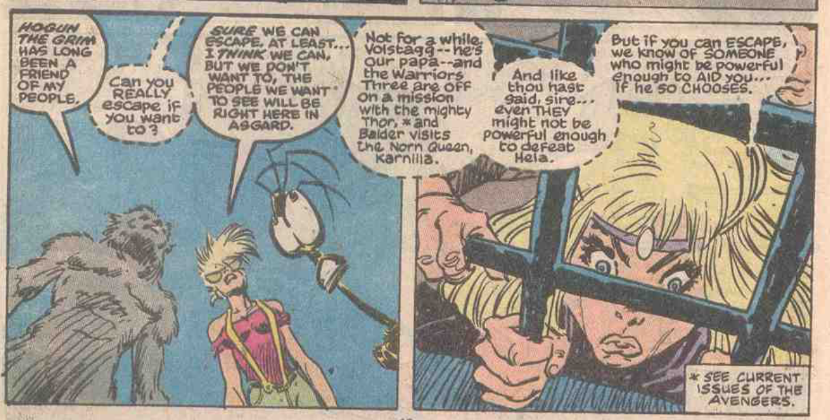 At this point, Rob Liefeld had already been announced as the new penciler of New Mutants (and the annual he drew had come out a couple months before this issue), and Marvel Age #81, on sale at the same time as this issue, ran two pages of character design sketches from him. 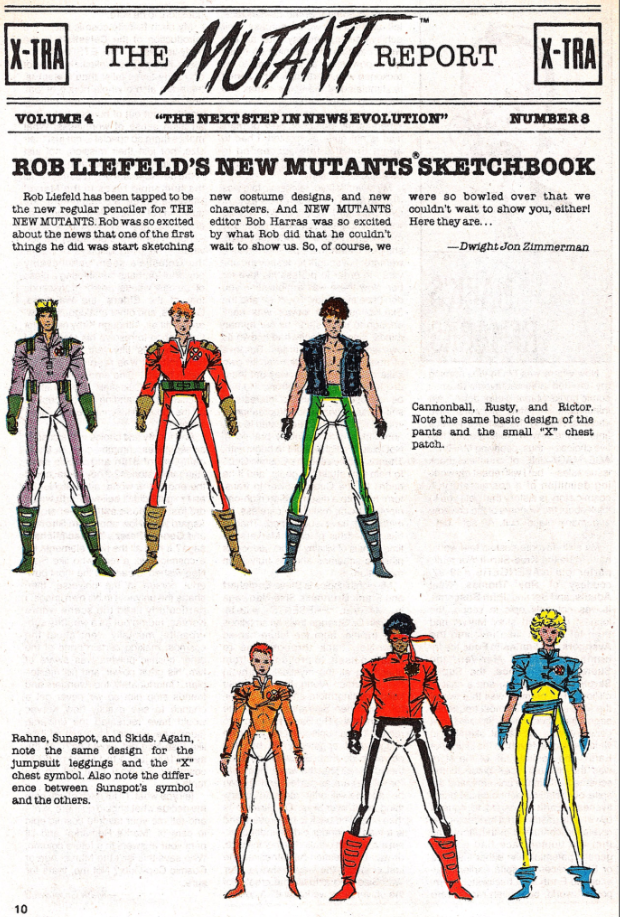 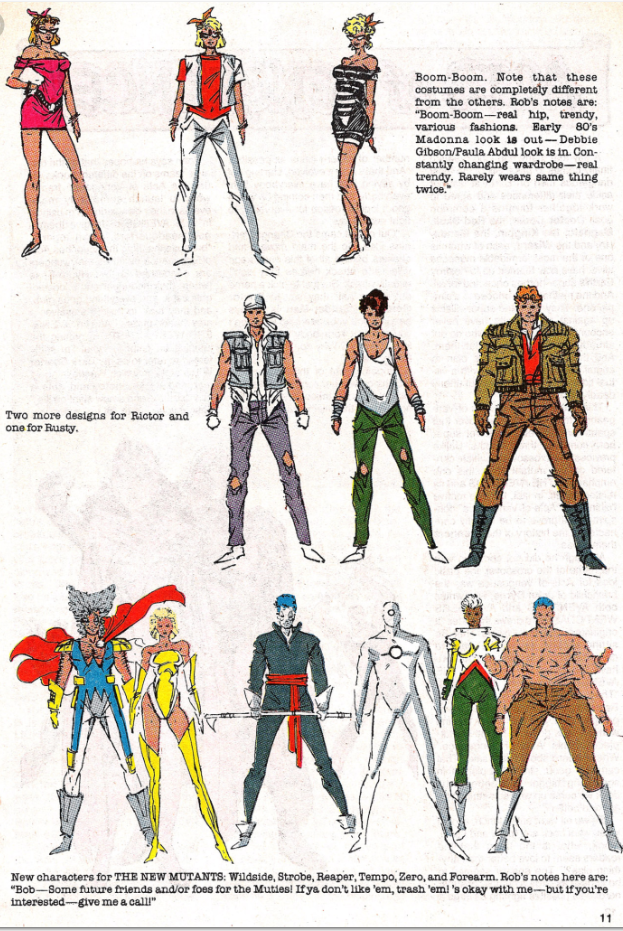 For the most part, the looks here for Sam, Roberto, Rahne and Rictor match what we eventually see, but Rusty and Skids are written out of the book before they ever get their own set of Liefeld's unified team costumes (given how often Rusty & Skids show up on Liefeld's early sketches relative to how little they actually get drawn by him, I'm not sure if Simonson was already planning on writing them out and just  hadn't told Liefeld, or if, once he realized the kind of pull he had with Harras, Liefeld pushed to write them out himself). We also see a bunch of designs that will eventually be used for members of Stryfe's Mutant Libertation Front, which will debut alongside Cable in issue #87.

A Work in Progress
We learn the Wolf Prince's name is Hrimhari in this issue.

Sam gets all worked up when Hela threatens Eitri's daughter, whom Sam met during the New Mutants' previous Asgardian adventure in New Mutants Special Edition #1.

Young Love
Rahne realizes Rictor has feelings for Boom-Boom, but he insists she's not in the right place to reciprocate. 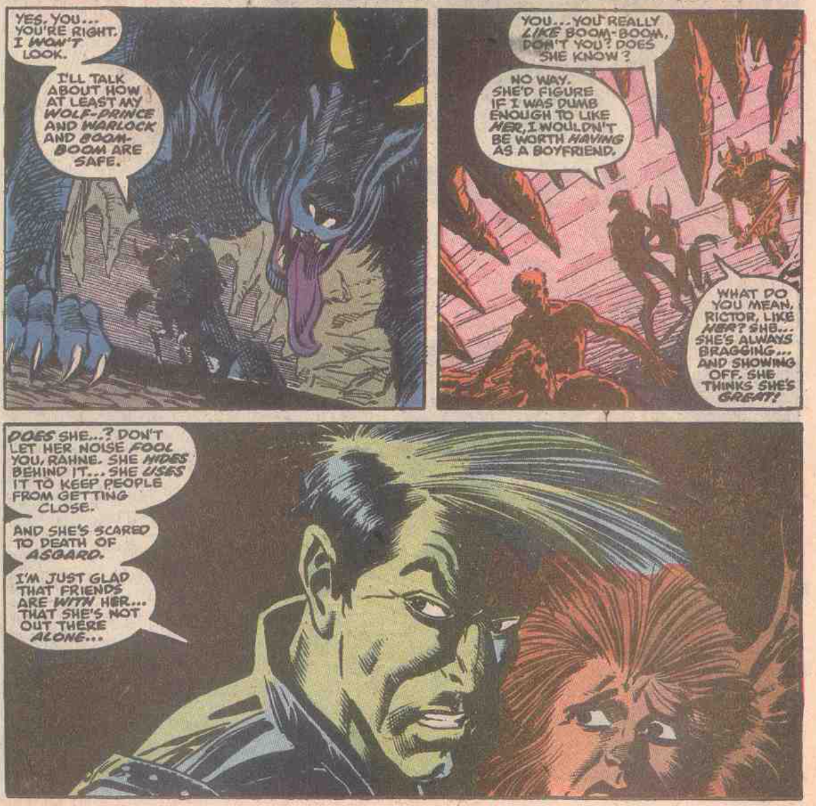 Teebore's Take
On a macro level, this issue moves the plot along a fair bit, revealing more about Hela's plan (to have Eitri forge her a mystical sword with which Dani, a mortal, will then slay Odin, giving Hela control of his soul) and establishing that Odin, awash in the Odinsleep, will not be able to step in and save Asgard as everyone had been hoping up to this point. But on the micro level, the plot of this thing is kind of a mess, with two different groups of characters going from freed to captured and back again about a half dozen times in the course of the issue. And for a storyline with three more issues of content left in it, the events of this issue are surprisingly dense, with Boom-Boom, Hrimharri and Warlock escaping Hel, discovering the sleeping Odin, getting captured, settling on a new course of action and escaping, then getting captured again all in the course of half an issue.

That's a lot of plot for one half of the story, and if this whole thing was ending next issue, it'd be more understandable why it was crammed in here. But with three more chapters looming, it seems like maybe some of that could have been expanded on or given room to breathe in a subsequent issue. Simonson does her best to ground things via character moments, with Sam subbing in for Roberto as the resident hothead while Hrimhari and Boom-Boom develop a grudging respect for each other, but most of that is lost in all the plot noise, as the issue somehow manages to do both too much and not enough at the same time.