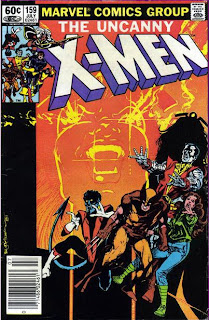 In a Nutshell
The X-Men fight Dracula.

Plot
The X-Men arrive in New York to visit Misty Knight, but at her apartment they find only her roommate Harmony Young. Harmony agrees to let the X-Men crash at the apartment while Kitty visits her parents, and Kitty departs, escorted by Storm. Meanwhile, in New Mexico, Corsair catches up with Cyclops, Havok and Polaris, and ponders whether he'll stay on Earth or return to space with the Starjammers. Back in New York, the X-Men grow concerned when Storm doesn't return, at which point they are contacted by the hospital, Storm having been admitted with a slashed throat. When Colossus and Wolverine arrive at the hospital, they find Storm on her feet, believing she was mugged, and demanding to be discharged. Back at the apartment, Storm awakens to open the window and invite inside the fog hovering outside. 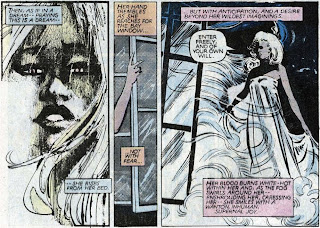 When Kitty returns later in the weekend, she finds that Storm's condition has worsened: she finds daylight painful, and flinches at the site of Kitty's Star of David. That evening, Dracula arrives to feed from Storm once more, but Kitty intervenes. Dracula and Storm flee to Dracula's castle uptown, while the X-Men follow. As the X-Men battle Dracula, Kitty confronts a partially vampiric Storm, but refuses to harm her friend. Storm's equal inability to harm Kitty snaps her free of Dracula's control, and she attacks the vampire. Dracula realizes that while he could fully transform Storm into a vampire, he could never truly control her. Having developed respect for Storm, he flees, freeing Storm from the curse. At Misty's apartment, the X-Men are celebrating their victory when they receive a call from Moira ordering them back to their island base: Professor Xavier's condition has worsened.

Firsts and Other Notables
Marvel's Dracula, star of the classic 70s series Tomb of Dracula, makes his first appearance in X-Men. He'll pop up occasionally in the next few decades (most notably next in the next annual), but never really becomes what you'd call an X-Men villain. 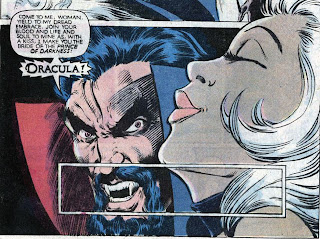 Dave Cockrum takes the next couple issues off; fill-in pencils in this issue come from Bill Seinkiewicz who was the artist on Moon Knight at the time. He'll return to the X-Men family in a few years to collaborate with Chris Claremont on an acclaimed (and somewhat divisive) run on New Mutants. While his later style will be much more experimental (and shades of it can be seen in his Moon Knight work), here he's still working in a very impressive Neal Adams-inspired style.

Fashion model Harmony Young, Misty Knight's roommate and a supporting character in Power Man and Iron Fist, makes a guest appearance. I'm not sure why Claremont doesn't use Misty herself, but maybe he couldn't get permission from the Power Man and Iron Fist office for some reason. A narrative captions later tells us that Misty, along with her partner (and Cyclops brief girlfriend) Colleen Wing, are celebrating with the X-Men following Dracula's defeat, and we catch a brief glimpse of the woman in a small panel.

A Work in Progress
As the issue opens, the X-Men are hoping to crash at Misty Knight's New York apartment, a nice callback to her time with the team circa issues #118-125 (though it's unclear why the X-Men, simply looking for a place to crash while Kitty visits her parents, didn't call ahead, nor why they burst into the apartment in full costume).

It's also never made clear why Kitty is meeting her parents, who live in Chicago, in New York City, though I suppose we can assume they're making a special trip to visit her, not unlike at the end of issue #143.

Kitty is back in her original black and yellow X-Men costume. 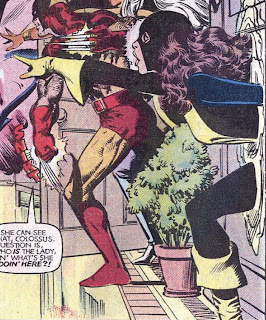 Corsair is hanging out with Scott and Alex, still rocking his pirate outfit. He is also debating his next step, now that he's been reunited with his sons.

Dracula notes that using a religious artifact (such as a cross) against him doesn't work if the wielder of the artifact doesn't believe in what the artifact represents (so Kitty's Star of David hurts him, but when she hold up a cross, it has no effect). 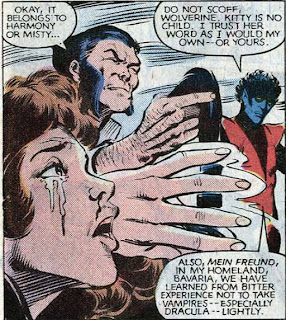 We get our first fastball special in a long time, and even get to see exactly how Colossus picks up Wolverine to toss him. 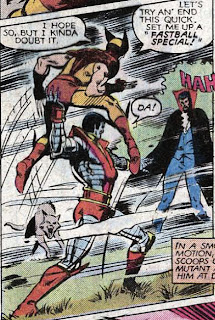 Dracula's control over Storm isn't enough to overcome her refusal to take a life. 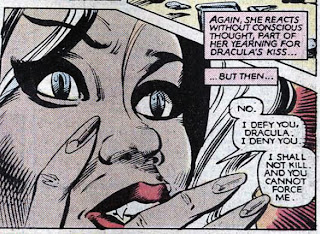 I forget if this gets addressed in the follow-up annual, but I'd be curious to know what effect Cyclops' optic blast, which is solar-charged, would have on Dracula.

I Love the 80s
Harmony Young makes a big deal out of dressing up Kitty and Storm so they'll look great for their night on the town; I'm no Tim Gunn, but their outfits don't seem that fantastic (and for someone who's just met the X-Men after they burst into her apartment unannounced, Harmony is awfully accommodating). 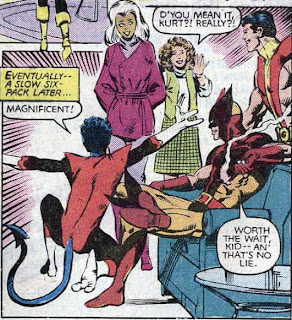 Dracula just happens to have a castle lair somewhere "uptown", because, well, that's what Dracula does, I suppose.

Claremontisms
Dracula finds himself especially enamored of Storm, adding himself, after Arkon and Dr. Doom, to the ever-growing list of villains who are attracted to Storm.

Young Love
Kitty gets jealous when Harmony refers to Colossus as cute. 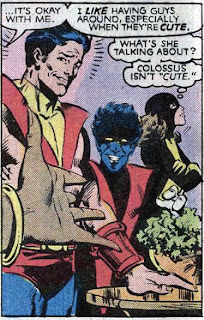 The Best There Is At What He Does
Following through on Dracula's statement that a cross only affects him if the wielder believes in it, Wolverine making a cross with his claws has no effect on Dracula.

Teebore's Take
As was discussed in the comments of last week's post, of the four standalone issues which form the bridge between the two acts of the Brood story, this one is my least favorite. Or, rather, the one I'm least likely to reach for to re-read (outside of on Halloween, maybe). Which isn't to say it's bad: as a standalone issue, it's quite good. The Seinkiewicz art (man, I am really going to have to learn how to spell his name by the time his run on New Mutants comes around) is absolutely gorgeous, striking the right balance between moodiness and Gothic melodrama that is required for a Dracula story (it's especially effective in black and white, which is how I read the issue most recently for this post), and the plot hits all the familiar beats while still remaining an inherently X-Men story.

But at the end of the day, I just can't get past the fact that for as well executed as it is, this issue of the four has the least impact on the series as a whole. While it will lead to a sequel in a future annual (and a minor plot point in an alternate reality series down the road), the other three issues begin or continue to lay groundwork for significant changes in the status quo of the X-Men. While this issue arguably features better art and a tighter story than some of the other issues in this mini-run, of them all this is the most standalone issue, and in my (perhaps unfair) estimation, that makes it the least of the four, at least in terms of significance to the unfolding X-Men narrative. But by no means should my ranking based on long-term contributions take away from this issue - being the least of these four issues is nothing to be ashamed of, and on its own merits, this is a great done-in-one story.