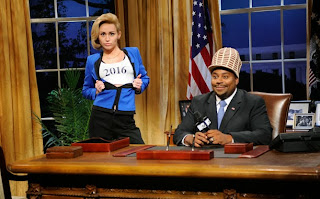 Say what you will about Miley Cyrus: at least she is able to have a sense of humor about herself. Or is at least able to pretend she has a sense a humor while on SNL as part of a calculated effort to quell some of the negative publicity surrounding her VMA performance. Either way, the end result was far more entertaining than if she'd been a diva and forced the writers to work around the elephant room. Beyond that, she was a perfectly cromulent host, more or less handling whatever she asked to do with a modicum of skill without ever really coming across as anything more than Miley Cyrus acting in a sketch.

Other Thoughts
No Miley Cyrus Show sketch, though we did at least get Vanessa Bayer as Miley in the cold open. And while I thought the cold open was an effective way of getting all the VMA stuff out of the way, I'm not sure the framing sequence was entirely necessary. I get that the gag is that everyone is making way too big a deal out of this whole thing (which they are), but still - it probably would have worked just as well with only the past/present Miley bits.

Also, nobody is better at crying for comedic effect than Bobby Moynihan.

The 50 Shades of Grey audition sketch was one of the show's semi-regular ways of cramming in a ton of celebrity impersonations, and it was nice to see some of the new cast members doing some new actors. I particularly enjoyed Taran Killam's Christoph Waltz and Random New Cast Member's Phillip Seymour Hoffman.

It's weird: the Girlfriends Talk Show sketch in general doesn't do a whole lot for me, but I really like Aidy Bryant's character in it. Something about the way she's indignant that her friend keeps passing her up for someone cooler, not because she feels hurt, but because she's mystified that nobody else thinks what she wants to talk about is cool.

Loved Kate McKinnon's Update character, the reversal of expectations and the zeal with which she deployed some of her more over-the-top lines cracked me the hell up. Also, I liked Jacob the Bar Mitzvah Boy more than usual this time around. I think it was his sheer horror at the presence of Cecily Strong that did it.

Nice to see more of Nasim Pedrad this week, but I still wish she had more recurring characters than Arianna Huffington. Her Aziz Ansari in the 50 Shades sketch was pretty great - let's bring that back somehow.

Mornin' Miami was really well constructed, with the various reminders to use their full names seeming like an offhand comment before building to the punchline, even if the actual punchline wasn't as funny as the build-up. But I did enjoy the simmering anger of the hosts when off camera, and their various promos on camera, which sounded like the kinds of things morning shows would cover and thus landed in the realm of "funny cuz it's true".Wouldn't mind seeing something like this again.

I liked bits around the edges of the poetry teacher sketch (like Keenan's haiku about losing his pot), possibly because I know some people like Vanessa Bayer's character, and I get what they were trying to do, but it ultimately didn't work,

Favorite Sketch: The "We Can't Stop" remix video wasn't the funniest sketch of the night in execution (most of the humor came from the visuals), but I loved the concept, so I'll give it the nod over the 50 Shades of Grey bit or Mornin' Miami.

Least Favorite Sketch: The cheerleader sketch was just random and weird and probably belonged at the end of the show (where it still would have been bad, but more understandably so), even without the apparent technical difficulties. Aliens abducting cheerleaders because they need our moon is funny in its randomness, but not enough to build a sketch around.

Miley Cyrus: If I owe anyone an apology, it’s to the people who make the bottom halves of shirts.

Seth: Loser - GOP. A new Fox News poll shows that disapproval of the Republican Party during the shutdown has jumped to 59%. And that's a Fox News poll! Talk about getting booed on your home field. By the way, if Fox News says its 59%, that's like the real news saying its 3000%.

Pat Lynhart: Do you know how amazing this effing game is? Last week I was reading The Paris Wife with my book club, this week, I had sex with over three thousand prostitutes, I am invincible!

Pat: The other day, my husband said, 'Pat, your thumbs are bleeding, and there's no more food in the house.' and I said, 'then go to the grocery store and buy some yourself, you whore!'

Jill Amockingbird: Are ghosts real? Turns out no. Here to talk about it is actor Topher Grace.