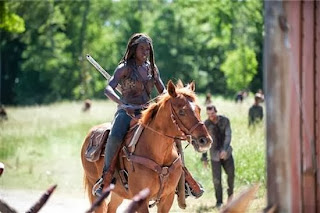 Last week I said, "To start the season, however, I think there are good stories that can be told about people being safe, comfortable and even somewhat flourishing while surrounded by zombies." Well, so much for that! The second episode of this season immediately tried to thrust that status quo into flux.

Infected was mainly about in two large changes. First, the prison is no longer the safe haven the characters thought it to be. Second, Rick is transformed from peaceful farmer back to a man of action and leadership. Neither of these changes are surprising but the speed at which they occurred was (at least for me).

I noted before that pacing has been an issue in the past for The Walking Dead and that proper pacing would be a key to this season's success. I was more worried about too slow of a pace but, in this case, I think the pace is too fast.

For the characters on the show the prison has been relatively safe and Rick has been a pacifist farmer for approximately six months. So the changes that occurred are presumably a bit of a shock to them. For the viewer, however, the idea of the people having a safe place to live and the idea of Rick forgoing his leadership in lieu of farming has only been established for one episode. One episode of, now, 37 episodes. So what I've called the "status quo" is really anything but. What we saw in the season premiere was merely a one episode anomaly that was quickly wiped away. The end result is that the impact of these changes is completely muted for the viewer.

Again, where this episode takes us is a road this series had to go down. All I'm saying is it didn't have to get there so quickly. I should note that, despite the prison being more vulnerable than the characters would like, everyone is still planning to live at the prison. So that's something.

I know Carol is trying to toughen up the kids (and I'm all for her teaching them survival techniques) but is hours after a kid loses her parent the right time to berate them? Maybe I'm just soft. Probably reason #152 that I'd never make it in a zombie apocalypse.

Speaking of Carol and the girl (Lizzie?), I'm not sure why a child should be the one to kill their zombified parent. It seems like a traumatic event that is best avoided if possible. Then again, I could totally see in 100 years having stabbing your parent's corpse in the head be a rite of passage; Like an Age of Ascension Ceremony or bar mitzvah!

In the zombie attack aftermath I first thought that Daryl stabbed Beth's corpse in the head. Apparently it was just some other random blonde. Beth is still, obviously, alive and well.

Carl mentioned he's not wearing his hat anymore because it's not a farming hat. I wonder if that was his idea or Rick's?

Apparently the sickness going around is a powerful flu strain or something and has nothing to do specifically with zombies. It's just a lack of sanitation.

Speaking of sanitation, The Talking Dead this week cited last week when Daryl licked his fingers before shaking some guy's hand as an example of how unsanitary things had gotten. That just reminded me that I meant to comment on that. That comment was: Ewwww.

I suppose that Rick sacrificing the pigs was symbolic of him sacrificing his peaceful farming ways. I was going to question whether all the pigs needed to die or if burning the pig farm was overkill but it sounds like Rick may have thought the pigs (and thus the pen) were all infected with the disease. Still, find a better way to burn the pen, Rick. Gas is a precious commodity!

While they are spending time killing the walkers at the fence I still feel like they could be spending MORE time doing it. Shouldn't there always be someone there doing it? Is it that difficult of work?

So...someone is burning people. Is it because they think they're infected with the disease or some other reason? Regardless, my money is on it being Carl. And Lizzie(?) is probably feeding the zombies rats.

And now it's time for a long rant:

So, Patrick dies of an illness at night in the bathroom and turns into a zombie. This leads to a massacre happening to the citizens of the prison. The characters and even the panel on The Talking Dead all treated this as one of those unpreventable tragedies that happen in a zombie apocalypse and nobody is to blame. To that I call complete and utter bullshit.

If any of these characters had half a brain this situation could have been totally prevented. First of all, shouldn't you have somebody on night watch duty? Secondly, and more importantly, why are they all sleeping in unlocked cells?

Regardless of epidemics, people die in their sleep. It happens all the time and it can be of completely natural causes. At the end of last season Rick was bringing in people from Woodbury and it looked like a lot of them were older people. Senior citizens are even more likely to die in their sleep. And, as this show has established, when you die you become a zombie.

Everyone should be sleeping in a locked room of some sort. Not only to keep a possible zombie out but to keep you in if you happen to die for whatever reason and turn into a zombie. It's just common sense. I know if I was living in this world my first priority would be dealing with my vulnerability while I'm asleep. It's idiotic not to.

But let's put that aside (as hard as that may be). So they're all stupidly sleeping in open cells. Even then, how did things get so out of hand? This episode was a microcosm of a larger failing of most zombie apocalypse fiction. You usually see the start of the zombie apocalypse and then the setting immediately switches to the world being completely overrun with zombies. The audience is left wondering exactly how things got so out of control. (The only fiction I know of that deals with this relatively well is World War Z the book. Dawn of the Dead was pretty good at it too, actually.)

Anyway, so we have rogue zombie in the prison at night. I suppose it's fortunate (or unfortunate) that his first victim is a heavy sleeper and zombie Patrick decided to bite the man's neck which, presumably, kept him from screaming. But that's all we really see until the next scene when zombies are overrunning the prison.

Could no one in the prison deal with two zombies? OK, maybe the zombies got other people in their sleep too. But I refuse to believe that everyone was getting eaten in a way the prevented them screaming. Zombies aren't that smart. So I would assume that an alarm would be sounded at, what, five zombies max? FIVE! You can deal with that.

A horde of zombies is difficult to deal with. Five should be easy. The residents of the prison have lived in the zombie apocalypse for a long time now. Even if they're not as seasoned as the core group they should know how to deal with a few zombies. It's not that difficult. Don't let them bite you and stab them in the head.

I could see someone getting careless and getting bit whilst dealing with the five zombies. But at the end of the day the whole matter should've been cleaned up with minimal effort. Yes, there'd be mourning for the lives that were lost but it never should've gotten to the point it did. Especially if they locked they're freakin' cells before going to bed! Hell, just set up tin cans in the doorway so the zombies knock them over when trying to enter and wake you up. Anything to protect yourself while sleeping...IDIOTS!
Newer Post Older Post Home
Posted by Dr. Bitz at 10:17 AM