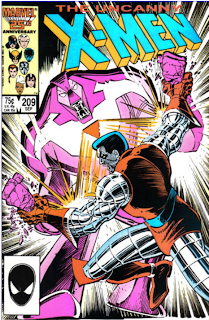 In a Nutshell
The X-Men and the Hellfire Club team-up against Nimrod.

Plot
In Central Park, a three way battle erupts between the X-Men, the Hellfire Club and Nimrod. After Nimrod blasts Shaw into orbit and incerates Von Roehm, Storm proposes a temporary alliance between the X-Men and the Hellfire Club in the face of Nimrod's power, and Tessa agrees. Elsewhere in the park, Rachel debates joining the fray, despite her injuries, when she's distracted by music and led to the Body Shoppe, whose mysterious proprietress offers to heal and remake her. Across the park, Storm has Leland use his power to increase Nimrod's mass and lower him to the ground. Seeing an opening, Nightcrawler attempts to teleport a piece of the robot, despite Storm's warning that Nimrod has likely learned to block that attack. Instead of harming Nimrod, Nightcrawler howls in pain, then disappears. Just as Leland manages to get Nimrod to the ground, he collapses, suffering a heart attack. 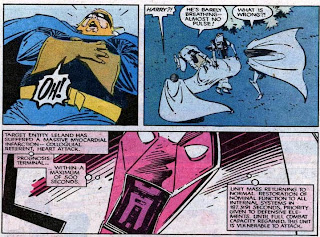 Colossus and Shadowcat, working together, manage to damage Nimrod further, allowing Selene to use the cables and rocks in the ground to bind him into place. With the last of his fading strength, the dying Leland retrieves Shaw and sends him hurtling back to Earth. With the force of a small meteorite, Shaw slams into Nimrod, shattering the robot. But as Wolverine steps up to further dismember the pieces, the remains of Nimrod teleport away. As the police arrive, Tessa extends the alliance further, offering the X-Men sanctuary at the Hellfire Club. Elsewhere, Rachel realizes her time with the X-Men is done, and enters the Body Shoppe, much to the delight of its owner, a disguised Spiral.

Firsts and Other Notables
Rachel leaves the X-Men as of this issue, lured by a disguised Spiral into her Body Shoppe with promises of being healed and given a new life. However much Rachel's absence may have been necessary for future stories, her departure is most directly a setup for a Phoenix limited series, intended to be written by Claremont and drawn by Rick Leonardi. It would have picked up where this issue left off, depicting Rachel's adventures in the Mojoverse, but ultimately never saw print. We'll next see Rachel escaping from the Mojoverse in the one shot that launches Excalibur.

The X-Men make a temporary alliance with the Hellfire Club in this issue; the alliance will, in future issues, be formalized and solidified, with Magneto joining the club as the White King. Ultimately though, while the alliance will feature in some future New Mutants stories, it won't amount to a whole lot and will be largely swept under the rug as Claremont leaves the book and the Inner Circle is wiped out by the Upstarts. 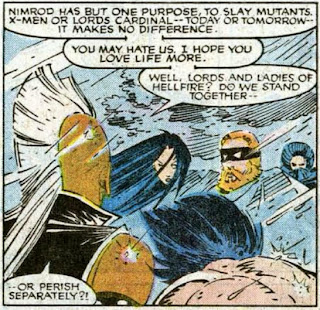 Nightcrawler, attempting to repeat Rogue's previous trick from issue #194 of teleporting a piece of Nimrod, gets severely injured and disappears in the process. His disappearance will feature in the next issue, while the injuries sustained here will play a role in "Mutant Massacre" and his eventual departure from the team. 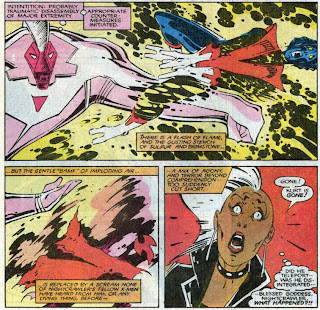 The Hellfire Club gets dealt some significant losses in this issue, as Harry Leland suffers a heart attack while fighting Nimrod and dies, while, to a much lesser extent, Friedriche Von Roehm is incinerated by the robot in the course of the battle. 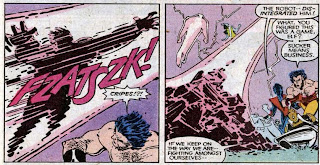 Despite all the setup with Nimrod posing as a human, living with the Rodriguez family and becoming a local hero, this issue essentially serves as the swan song to his story, at least as written by Claremont. He'll next appear in issues #246 and #247, in which this iteration of the character is effectively destroyed.

Rogue mentions encountering Sebastian Shaw prior to joining the X-Men; this encounter is, as of yet, unpublished, intended to appear in later issues of the Claremont-penned Ms. Marvel before that title was cancelled.

A Work in Progress
For anyone who didn't get the reference, a thought bubble from Selene establishes that Nimrod is named after the legendary hunter. 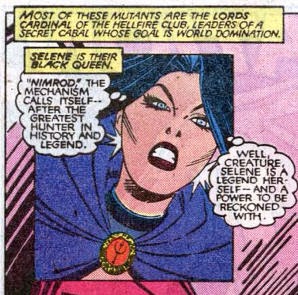 Callisto saves Storm, her comment while doing so foreshadowing the upcoming alliance with the Hellfire Club. 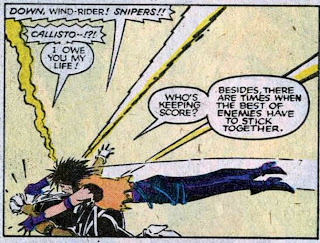 As further proof of Nimrod's status as the ultimate Sentinel, he thinks about his battle strategies, rather than declaring them out loud. 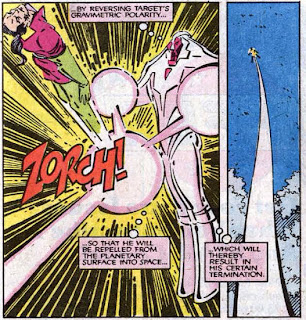 Once again, the idea of Storm having somehow retained or regained some measure of her power is teased, but it ultimately leads nowhere. 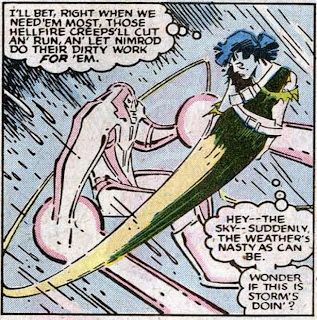 In a play on a similar tactic they used in issue #202, here Shadowcat phases herself inside Colossus, masking her from Nimrod's sensors, then phases into Nimrod, disrupting his systems and leaving him vulnerable to Colossus' attack. 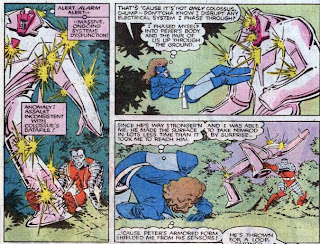 The Best There is at What He Does
In a humorous little sequence, Wolverine and Nightcrawler essentially scare a group of Hellfire Club soldiers into running off. 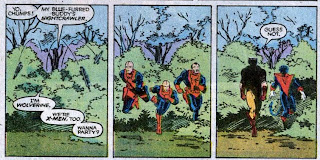 For Sale
I've never heard of the A.I. Gang before, but it sounds pretty awesome. 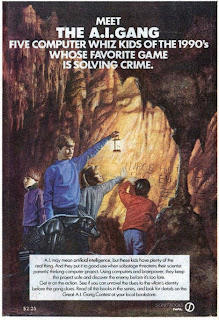 Classic X-Men, the first issue of which was on sale at the same time as this issue, receives a full page house ad. 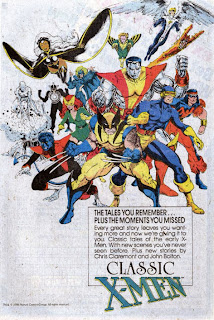 Teebore's Take
The action packed finale to the three part Hellfire Club/Nimrod arc, this is another Classic Claremont Action comic, masterfully paced, permeated with a genuine sense of "how are they going to get out of this?", and filled with clever bits of fight choreography, like Nimrod getting held in place via Con Ed cables while Shaw is turned into a living meteorite and sent careening down into the robot.  In that regard, this is one of the more straight-forwardly comic book-y issues of the soon-to-end Claremont/Romita Jr. run. But there's a further wrinkle to the issue that adds an interesting juxtaposition to the traditional action sequences that speaks to the darker thematic elements of their run as well.

In the course of their battle with Nimrod, Storm proposes an alliance of necessity with the Hellfire Club, in order that both groups survive in the face of Nimrod's power. Starting next issue, we'll see that alliance extended in the name of that which Nimrod represents: humanity's fear and hatred towards mutants. Earlier in their run, with the formation of Freedom Force, Claremont and Romita Jr. had repositioned the X-Men so that they were firmly on the wrong side of the law (even while their actions were still ultimately good). Now, in the face of an establishment that is growing increasingly hostile towards mutants, represented by the mutant-hunting Nimrod, they're forced into a partnership with those who were once their greatest foes, responsible in part for perpetuating the greatest tragedy the X-Men had ever faced. The world of the X-Men is no longer black-or-white: federal agents can be villains, villains can be allies. That this is set in contrast to one of the book's more traditional and viscerally-satisfying sequences of comic book action makes it, and this issue, all the more striking.

Next Issue
Tomorrow, the New Mutants battle Legion in New Mutants #44, and Friday, X-Factor battles Freedom Force in X-Factor #8. Next week, the team searches for Nightcrawler and Phoenix in the prelude to "Mutant Massacre" in Uncanny X-Men #210.
Newer Post Older Post Home
Posted by Austin Gorton at 11:00 AM