How I Met Your Mother 9x06: Knight Vision 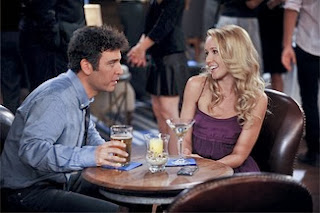 Well, at least that was a funnier episode. And the stock pre-wedding conflict involving Robin and Barney was relegated to the B-plot. And the whole Robin/Barney's mother conflict was nowhere to be found (yet). At this point, we've got to take upside where we can find it. So even though it may just be caused my abiding affection for Indiana Jones and the Last Crusade, but I was amused by the ethereal knight passing judgement on Ted's choices. And even though the Robin/Barney subplot reminded us again of how they have a tendency to be horrible, horrible people, seeing them together instead of arguing at least reminds us of why they are getting married (and seeing the cast play each others characters in the altered flashbacks was genuinely a hoot). We didn't get any more of the Mother, and this episode did very little to advance Ted's overall plot, but at least it did something different than the previous two episodes.
Other Thoughts
Sorry for the lateness of this post. The local CBS affiliate in my area apparently decided we'd rather watch the Vikings try (and fail) to play football than this episode, so it didn't air until later, and then I couldn't watch it right away, etc. etc.

In terms of the overall plot, we at least know that Ted didn't hook up with anyone just prior to meeting the Mother (and why), which is probably a good thing.

Seriously, Robin and Barney more or less killed the pastor, right? They really are horrible, ridiculously sitcom-y people at this point, aren't they?

This was probably the best use yet of the Marshall road trip subplot, but I still hope he gets to the wedding soon.

I forget: as it ever been established why Barney and Robin are getting married at this inn? I didn't really think about it until this episode, but it seems odd for these two characters to be jumping through these hoops just to get married in a cutesy church.

You know, I'm not entirely convinced the ending to Last Crusade wouldn't be improved by Indy doing a guitar solo as scantily-clad women dance behind him...