Real life got in the way this week, leaving me little time in the evening to watch TV, so I've quickly fallen behind on several shows. But, let's talk about some things I have watched!

The Simpsons: Homerland
Not a terrible episode, but I probably would have enjoyed it more if I was more familiar with Homeland. I know the broad strokes (solider brainwashed into being a terrorist, crazy CIA agent, Mandy Patinkin has a huge beard), but that's about it.

Also, if you haven't heard, Fox announced that Simpsons will be back for a 26th (!!!) season next year. 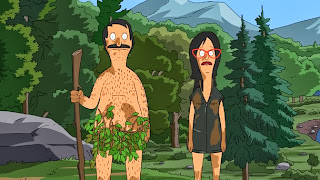 A typically solid and hilarious episode for this show, I think my favorite part was that Linda had obviously put serious thought into the idea of Gene being raised by wolves.

And like The Simpsons, this already got picked up for another season. Considering this was once a bubble show in danger of cancellation, that's pretty amazing (and awesome).


Family Guy: Finders Keeps
Here, my favorite part of the episode was Peter using his cutaway powers to teleport.


American Dad: Steve and Snot's Test-Tubular Adventure
And here, I loved all the bits with nature trying to do in Darren the Dodo. Also, the transition from Roger the Daycare Provider to Roger the Headmistress of a Girls School.


Finished what turned out to be the first season of Under the Dome last weekend, and I'd really like to know what the creators had planned for the ending if this had remained a limited "event" series like it was originally planned to be. I read (and mostly enjoyed) the book, but the series deviated from it fairly quickly and drastically, and was wildly uneven. I mostly kept watching just to see how it compared to the book, and to see what different writers did with these characters in a similar setting. I'll be back next summer for season two, but that finale really doubled down on the show's worst tendencies (while the penultimate episode played to its strengths), which makes for an unfortunate end note.

Also, Linda is quite possibly the dumbest character in the history of television (she's largely a creation of the show). And there's an "n" in the word "important", contrary to her pronunciation.


Oh, and circumstances were such that I watched the Dads pilot. It was just as awful as I'd heard. Glad I passed on that show.

Revolution: Born in the USA 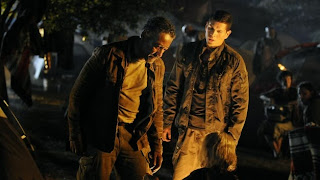 Wisely, it seems Revolution has rebooted itself for its second season, scattering the cast to new locales, restoring its initial premise (a world without power) and following through on its cliffhanger by actually destroying Philadelphia and Atlanta. Though I'm still confused as to why Aaron couldn't turn the power back on after turning it off in order to try and stop the missiles (and more importantly, I'm confused about whether I should be confused or not), I'm more intrigued in where the show is going now than I had been for the last few episodes.

Also, I'm glad the show isn't done with Monroe even though his republic has been blown apart - there's definite storytelling potential in dealing with a powerless Monroe ingratiating himself into the main cast (as is obviously going to happen).


Picked up Doctor Sleep, Stephen King's sequel to The Shining this weekend. Still trying to decide if I want to re-read The Shining (it's been awhile) before I start it, though.


The Crazy Ones - Pilot
If you ever wondered what it would be like if the Genie from Aladdin was an ad executive, this show is for you.

I really cannot stand Robin Williams (I like him fine in dramatic roles, but his tired comedic schtick drives me bonkers), but I like Sarah Michelle Gellar, so I was torn about this show. I'll give it a few more episodes, but this has a shorter lease than I give most new sitcoms, and unless they reign in Williams' schtick, I'll be gone pretty fast. 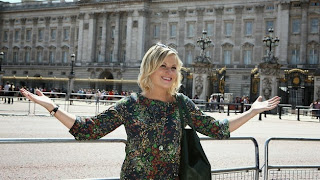 It sure is convenient that Andy got a job in London the same time that Chris Pratt is there filming a movie, huh?

In all seriousness, it's great to have Parks and Rec back, and this episode did a nice job of sending most of the cast to London while still connecting the episodes to the larger storyline of Leslie's recall. Also, the fact that Ron learned Diane was pregnant, proposed (using a hand-crafted wooden ring box) to her and got married in the cold open is true to his character, a little ballsy for the show (that's a lot of potential storylines sailed through in minutes), and pretty awesome.


Stuff Still on My DVR
The Michael J. Fox Show, the premieres of Once Upon a Time and Top Chef, and new Sleepy Hollow, Mom, Agents of SHIELD, The Goldbergs, Trophy Wife, Revolution, Glee, Big Bang Theory and Parks and Rec.

Quotable Quotes
The Simpsons
Bart: You guys know I don’t talk to field agents. Get your boss on the phone.
Agent: We know all about you, Milhouse.
Milhouse: How did you know my name’s Milhouse?
Agent: I didn’t—until now...

American Dad
Steve: I can assure you we are only here to collect pubic hair.

Brooklyn Nine-Nine
Terry: What kind of castle has wheels?!

Boyle: You had me at no paperwork.
Peralta: That was the very end of the sentence.

Revolution
Miles (to Charlie): Try and keep your stupid to a minimum.

Parks and Recreation
Ben (to Andy): Hogwarts is fictional. Do you know that? It’s important to me that you know that.

Chris: This is the moment we’ve been dreaming of. You and me and our baby. And Tom. And his weird feud with our doctor.