The Simpsons: Treehouse of Horror XXIV 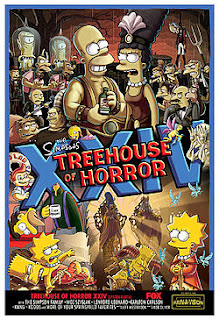 The much-ballyhooed opening, directed by Guillermo Del Toro, was easily the best part of the episode. Which isn't to disparage the rest of the episode, which was decent. The middle segment, in which Bart's head is affixed to Lisa's body, was pretty awful though, and displayed none of the usual wit or imagination present in the Treehouse episodes. The first segment was amusing and featured tons of clever word play even while it wasn't tremendously funny, while the third segment, my favorite of the bunch, was a pretty decent Freaks parody and featured some of the episode's strongest gags. Not the funniest episode (Treehouse or otherwise), but the opening and first & third segments were mostly clever, imaginative and fun.


Bob's Burgers: Fort Night
Topping last year's excellent Halloween episode would have been a tall order, but I think this episode managed to pull it off. Great stuff.


Once Upon a Time: The Heart of the Truest Believer/Lost Girl 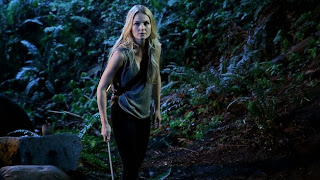 Focus does this show a world of good. While there is fun in seeing classic stories re-imagined in either their original or a modern setting, placing a core group of characters in one location and limiting the cutaways to other locales or characters within an episode helps keep things from feeling too frenetic, scattershot and underdeveloped.

Other random thoughts from the beginning of the season (I haven't watched the most recent ep, or the premiere of the spin-off, yet):


It's been a long time since I dug into the quarter boxes at a comic convention and bought in bulk, but one of the dealers at Fallcon last weekend had a whole slew of comics he was selling for twenty-five cents each or five for a dollar, and that was a deal I couldn't ignore (especially since the boxes were relatively well alphabetized). So I ended up filling a grocery bag full of cheap comics, plugging some gaps in my Fantastic Four and Incredible Hulk runs, as well as nearly every issue of Daredevil I was missing from the mid 200s up to the end of the first volume.

I also nabbed a handful of trades (including the gorgeous John Buscema Visionaries hardcover), got the last few issues of Rom I needed, and, as I do at every show, picked up a few more Silver Age issues of Avengers and X-Men in decent shape at reasonable prices as part of my ongoing effort to acquire complete runs of both titles.


Agents of SHIELD: 0-8-4/The Assest
Honestly, I think the biggest surprise regarding Samuel L. Jackson's cameo in the second episode was the fact that it was mostly kept secret (I had no idea it was happening until after the episode aired). The actual appearance didn't amount to much, but it does suggest that, at least in its initial goings, the show might be able to pull in bigger guest stars than I was expecting (in other words, if the creators were willing to use a Nick Fury appearance as essentially a gag in the second episode, they're probably confidant they could do something bigger during, say, sweeps).

I was also largely impressed in the second episode's ability to rehash the status quo of the show without feeling like a complete retread of the pilot, while I appreciated the setup in the third episode for the show's first legitimate super-villain, again, for what it portends for the future if nothing else.


Trophy Wife: Cold File
Man, that bit in the second episode with Marcia Gay Harden's character and the spilled salsa was one of the funniest extended gags I've seen on a show this season.


So My29, which is one of those local syndication channels in my area, airs syndicated episodes of The Simpsons every night at 10:30, and I have my DVR setup to record them so I always have a chunk of random episodes I can throw on when I need some background noise or just want to unwind with a classic or something, but lately, it seems like all they've been doing is playing the episodes from last season on a constant loop. And look, I may not be as down on modern day Simpsons as some people, but there still aren't that many episodes from last season I want to watch again and again, especially in this short a period of time, and especially when its the Halloween season, and they should be running nothing but old Treehouse episodes between now and the 31st. So frustrating. 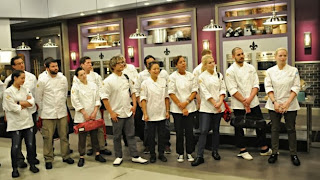 Look, I don't care if they don't find out they're going to New Orleans until they're boarding the plane, but I have no sympathy for any of the cheftestants complaining they don't know how to cook alligator or gumbo or whatever. You're going to New Orleans, you have to know there's going to be a challenge involving gumbo, swamp meats, etc. Look up how to cook this stuff beforehand! It's just like the people who have to do a dessert and complain about not being a pastry chef. You're going on Top Chef: be sure to have a dessert or two in your back pocket! You knew what you were signing up for.

Otherwise, not much to say about these first episodes. Early in the goings it's tough to care too much about one contestant or another because the field is so crowded. I guess I kinda like Stephanie, just cuz I remember her from almost making the cut last season, but that's about it, so far. I was a little surprised Jason got the ax already though, mainly because A. he was a pretty boy and B. he was enough of a douche that I could see him evolving into the season's villain. Oh well.


The Big Bang Theory: The Scavenger Vortex
I can't decide if the ending to the scavenger hunt, in which Raj declares everyone the winner, is either ridiculously clever, in that we, the audience, feel exactly what the other characters are feeling (cheated out of a satisfactory conclusion) or just terribly lazy. I'm leaning towards the later.


Glee: Tina in the Sky with Diamonds 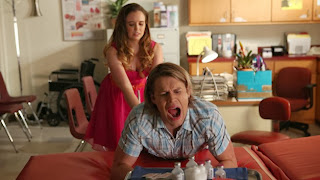 Granted I'm not the world's biggest Beatles fan, but the two part Beatles premiere ended with something of a whimper. Maybe it's the fact that the whole Tina Prom Queen bit was almost shot-for-shot the same thing that happened when Kurt was awarded Prom Queen, or maybe it's just the looming specter of the emotional Cory Montieth memorial episode, but this seemed like a pretty blah episode, especially for one with a prom (one of those "big deal to teenagers" things this show usually handles well) and whatnot.

Oh, and Sue's comment about how the glee club will eventually just choose their number for Nationals at the last minute was winkingly fourth wall, but now that we know the writers are aware of how poorly they script the competition stuff, will they improve it? Probably not.

Also, we're just not going to feature Joe Jesus Dread Head and Sugar except during competitions now, right? Like, the show's not even going to bother otherwise anymore?

Finally, up until this one, all the other proms on the show were junior and senior specific? That makes no sense, given what we saw.

Favorite Song: Usually I like "Hey Jude" more than "Here Comes the Sun" (though I generally like both), but here, the later had a bit more directorial flair, so I'll go with that. Though Blaine really killed it on those "Jude" nah-nahs at the end.

Things of Note Still on My DVR
Once Upon a Time in Wonderland, The Tomorrow People, a good chunk of Revolution, and the latest Glee and Parks and Rec.

Quotable Quotes
The Simpsons
Pilot 1: Kite at two o’clock!
Pilot 2: I don’t know what that means, I have a digital watch!”

Strongman Homer: I’m in the best shape anyone is—in the 1930s!

Strongman Homer: I get Marge to marry Moe, then I kill Moe, then she gets the ring, then I marry her and the ring is mine! And the brilliance of my plan is its simplicity!

Bob's Burgers
Linda: Mort, Teddy, what are you doing right now?
Mort: Adjusting myself without anyone noticing.
Teddy: Watching Mort adjust himself.

Family Guy
Sorry! The board game that teaches you how to be a dick.

Stan: Are we really gonna do this?
Steve: Do you have a medium character?

Once Upon a Time
Snow: So if you would just let us share our wisdom…
Emma: I appreciate your trying to be parents, but we’re the same age. We have the same amount of wisdom.

Trophy Wife
Warren: Maybe she talks about salsa all the time, and we’re just noticing it now.

Bert: Turns out I didn’t hurt my uterus at all.
Pete: That’s because you don’t have a uterus, buddy. Girls have uteruses.
Bert: So, what’s... in my butt?
Pete: Butt stuff.

The Big Bang Theory
Amy: As my mom used to say, ‘When you’re doing a puzzle, it’s like having a thousand friends.’ She was full of fun lies like that.

Parks and Recreation
Ingrid: I have a PhD from the Sorbonne.
Leslie: For what, wearing Chanel suits?
Ingrid: There was a fashion component, yes.

Ron: I suppose you wouldn’t consider moving. I hear the school system in the tunnels underneath Yucca Mountain is adequate.
Diane: I love you, but your solution to everything is to live inside a mountain.
Newer Post Older Post Home
Posted by Austin Gorton at 12:00 PM