How I Met Your Mother 9x05: The Poker Game 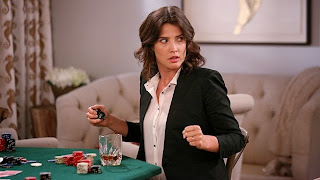 Blech. I am so sick of manufactured Barney/Robin drama. Look, I get that the creators need to come up with A-plots for twenty-odd episodes this season, but if the best they can do is to run Barney and Robin through all the usual pre-wedding stories exaggerated to ever-more-cartoonish levels, they probably should have just ended the series last season. Even beyond the fact the show is doing little to elevate this material beyond the standard story beats, it's all rendered as false conflict even more than on a regular sitcom (where there still exists a small chance the engaged couple could call off the wedding), since we know for a fact that Barney and Robin ultimately end up together. On a macro level, that's not a problem for telling stories about their relationship, but when it gets down to this level of nitty-gritty, it just makes the plots seem all the more pointless. Basically, I wouldn't mind these kinds of bog-standard pre-wedding stories if they were telling them in either a really funny or original way. Unfortunately, so far, they are doing neither.

Other Thoughts
Man, I really don't need to see an extended storyline involving Robin fighting with Barney's mother all because Barney is incapable of not taking things too far. Just explain the situation and move on. Hopefully, this will turn into another non-story, like the Billy Zabka/Ted rivalry teased at the end of the last episode that never actually materialized.

Speaking of, I'm glad Billy Zabka is still just casually hanging around. The gag where he, Ranjit and Lily each emerged from increasingly-ludicrous hiding places was pretty great.

So thank you notes are antiquated and a waste of resources (giving thanks for a gift is important; I just don't buy that receiving it on a fancy sheet of paper is somehow more genuine than receiving it in person or electronically), but it's totally within character that Ted would be all about them. And, I suppose, Marshall as well, since he comes from Minnesota and that seems like the kind of thing we'd be all about.

I'm not terribly rote on the continuity of this show, but I think the Halloween flashed back to in this episode would have occurred during season three, after Lily and Marshall's wedding but before Ted met Stella, as there was no Halloween episode that season. I'm also fairly certain the Chicago pizza place Marshall wanted to stop at was the same one to which he and Ted attempted a road trip in an earlier episode.

I did appreciate all the various time shifts in this one. More of that, please.

So Stuart steals stuff now, and is cheating on his wife? Okay, I guess. Not sure what that was all about.

So when is the Mother coming back?

Ted: I asked what they used at your favorite coffeehouse and got you that exact one-tier-down model!