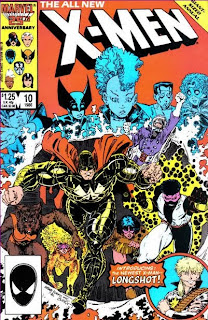 In a Nutshell
Mojo takes control of the X-Men, forcing the New Mutants to battle their mentors.

Plot
The X-Men train in the Danger Room, their actions unknowingly recorded by Betsy's bionic eyes and beamed to Mojoworld, where they generate huge ratings for Mojo. Hoping to further increase his ratings with a live performance, he sends Longshot to the X-Men, who pops into the Danger Room through a portal along with an ectoplasmic substance that covers the X-Men. The next morning, the X-Men awaken to discover they are getting younger, something which Warlock and Doug determine is caused by the ectoplasm that accompanied Longshot. After Betsy picks up an image of Mojo in Longshot's memory, the de-aging X-Men decide to track him down, only to find the New Mutants standing in their way. However, Magneto, who is still old enough to possess his powers, knocks them out, and the young X-Men rush off to Central Park, where they discover Mojo waiting for them. Back at the mansion, the New Mutants regain consciousness and don new uniforms, "graduating" themselves to X-Men in order to rescue their friends.

Magik teleports the team to the last known position of the X-Men, and they arrive on the stage of the Delacorte Theater, which has been taken over by Mojo and Spiral. Suddenly, the New Mutants are confronted by the X-Men, now slowly returning to their actual ages and reacquiring their powers, but indoctrinated to serve Mojo. A fight breaks out between the X-Men and the New Mutants, and in the course of the battle, the X-Men begin to regain their memories and true identities. After Shadowcat phases through Mojo's chair and disrupts his control, everyone is freed, and Mojo flees, leaving Spiral behind. The X-Men grant Spiral her freedom in exchange for casting a spell which returns everyone to normal. Mojo returns home to discover his latest adventure has generated his hightest ratings ever, and he decides to leave Longshot with the X-Men, to infuriate Spiral and make his eventual victory over them all the sweeter.

Firsts and Other Notables
Longshot sort of joins the X-Men as of this issue. The issue ends with him remaining at the mansion, yet he'll be absent throughout "Mutant Massacre" before popping up after that storyline ends. As a result, he is "officially" considered to join the team sometime between this issue and Mephisto vs. the X-Men #3 (the next time we'll see him amongst the X-Men) by the official Marvel Index.

Longshot was last seen leaving Earth to liberate the Mojoverse at the end of his limited series; he appears here with no memory of himself or the events of that series, and the implication (made clear later) is that he was recaptured by Mojo, his memory wiped, and then sent to Earth as part of Mojo's plan to capture the X-Men.

This issue marks the debut of the concept of the X-Babies, pint-sized versions of the title characters. In this story, the X-Babies are simply the X-Men reverted to childhood by Mojo. A future annual will reveal a group of X-Babies independent of the X-Men, created by Mojo in an attempt to have a group of X-Babies under his control after the adventures of the group in this issue prove wildly popular in the Mojoverse. Various iterations of these standalone X-Babies will pop up occasionally thereafter, proving popular enough to warrant the occasional one-shot or miniseries of their own. 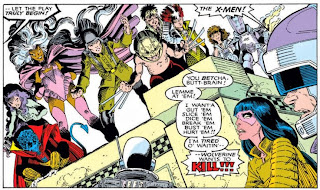 The New Mutants don their "graduation costumes" for the first time, taking action as full blown superheroes in order to rescue the X-Men. They will pull these costumes out again on future occassions, before they're retired for good when the team gets different individualized costumes during Louise Simonson's run. 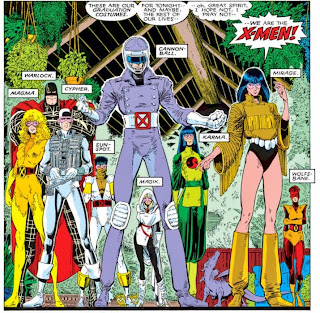 In terms of the costumes, my thoughts:
The Bad: Karma (too busy), Mirage (the bare legs, too stereotypical), Cypher (way too busy).
The So-So: Wolfsbane (it's fairly blah), Sunspot (it looks better when he's powered up), Cannonball (ditch the helmet, otherwise it's fine, and very similar to his later X-Force costume).
The Good: Magma (it simulates her fiery body effect without turning her into fire).
The Great: Magik. I wish she wore this costume more often. It perfectly suits her character.

Nocenti's Brat Pack characters pop again, in the audience of the play the X-Men and New Mutants crash, as do the talking frogs from that Thor storyline where Thor became a frog (and, off panel, Walt and Louise Simonson are there as well).

The cover to this issue is an homage to Giant-Size X-Men #1.

The Chronology Corner
This issue is notoriously problematic to place within the ongoing X-Men narrative, arguably the only issue of Claremont's run to not fit neatly into place. Kitty, Colossus and Nightcrawler are all present, so it must take place before "Mutant Massacre" and issue #211. Rachel is absent, so it must take place after issues #209-210 (and Colossus is back in his classic look, which he re-donned in #210), yet Nightcrawler shows no ill-effects of his encounter with Nimrod (he teleports repeatedly with ease throughout this issue).

Furthermore, Longshot ends up staying at the mansion at the end of this issue, yet he is nowhere to be found until after "Mutant Massacre". It could be argued that he was simply off somewhere else during that storyline, yet considering he arrives on Earth in this story with no memories whatsoever (he doesn't even know what water is), it begs the question of where he would have gone.

Most people (including the official Marvel index) nevertheless place this story as occurring between issues #210 and #211, which is where we're covering it, simply because that's the least problematic place for it (and because it follows on from New Mutants Annual #2, which fits rather more neatly amongst other issues around this time).

A Work in Progress
Psylocke is hanging around the mansion, questioning whether she belongs with the New Mutants or the X-Men, though she's ultimately captured and transformed by Mojo along with the rest of the X-Men.

It's established in this issue that Besty's bionic eyes are essentially cameras, beaming the events she's witnessing back to the Mojoverse, where Mojo presents the adventures of the X-Men as a TV show. 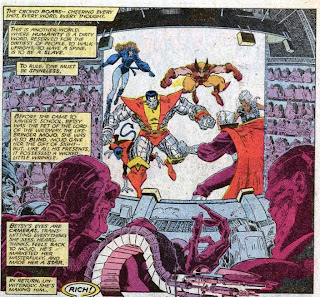 Doug and Warlock merge again, with Doug quickly brushing off any concerns such mergings may cause. 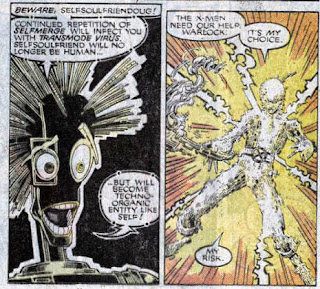 The X-Men track Mojo to the Delacorte Theater in Central Park, the same place from which Spiral abducted Rachel in issue #209.

Cerebro is unable to detect the transformed X-Men as, having become children again, they've lost their mutant powers. 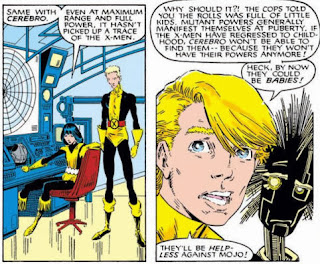 Magneto, Storm and Wolverine are said to be the oldest X-Men, which fits everything we've seen before. 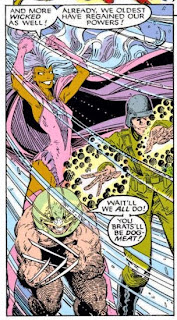 For the second annual in a row, Storm regains then ultimately loses her powers, this time saying that regaining her powers through Mojo would taint them.

This causes Betsy to question her bionic eyes, also gifts from Mojo, but she ultimately continues to keep their existence a secret. 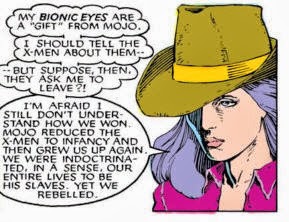 Storm and Wolverine explain to Betsy that the X-Men were able to break free of Mojo's control because, ultimately, the X-Men are more than mutants, they're also heroes, and that trait is what led Professor X to choose them (and the original X-Men) over other mutants to be his X-Men. 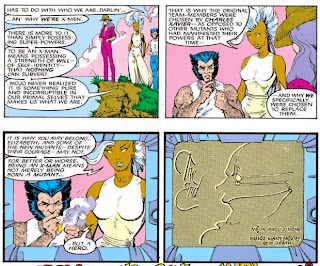 Claremontisms
Doug says that merging with Warlock is "my choice, my risk", while Dani "hopes not, prays not" that the New Mutants will be the X-Men for the rest of their loves.

The Best There is at What He Does
Mojo reduces Wolverine to an animalistic state, while his rage at ending up like that again is enough to snap him out of Mojo's control. 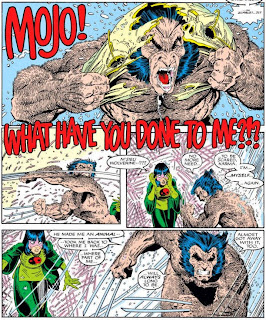 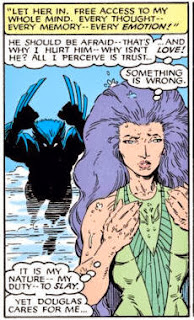 After which, they flirt with one another. 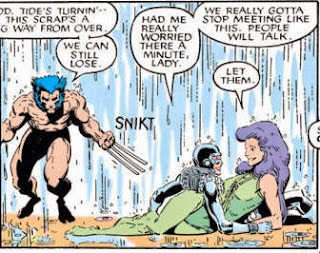 Teebore's Take
Following on from New Mutants Annual #2, this issue continues Claremont's efforts to absorb his Marvel UK and Ann Nocenti's Longshot characters into the larger X-universe. And like that previous issue, this one too is frenetic and a touch whimsical while being grounded by stellar art. This story also has a plot that centers around the characters changing their ages. Where in the New Mutants annual most of the New Mutants were aged into adults, here, the X-Men are de-aged and transformed into the "X-Babies", forcing the New Mutants to "graduate" and become the metaphoric adults they physically became in the previous story.

This combination of New Mutants and X-Men annuals is also similar to the "Asgardian Wars" story the previous year, in that events from a New Mutants story carry over into an X-Men one, but compared to that story, this ones comes up a bit short. Granted, they're both trying to do different things (the prior cast the characters in an epic high fantasy story, while this is more concerned with the zaniness and satire inherent to Mojo stories), but it's hard not to compare them. Nevertheless, while this story may not be the all time classic that "Asgardian Wars" is, it's still a lot of fun, featuring a great New Mutants vs. X-Men battle, and there's never anything wrong with an Art Adams drawn annual.