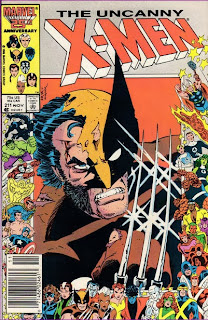 In a Nutshell
"Mutant Massacre" begins.

Plot
In the Morlock Tunnels, the Marauders begin mercilessly slaughtering everyone in sight, but one Morlock manages to escape and reach the X-Mansion, alerting the X-Men to the attack. The X-Men are teleported into the tunnels by Illyana, and immediately set upon by Riptide and Vertigo. Nightcrawler is able to subdue Vertigo through a series of teleports, but the effort leaves him open to an attack by Riptide, who severely injuries Nightcrawler before fleeing with Vertigo. Storm sends Illyana back to the mansion along with Nightcrawler and other wounded Morlocks, then splits the X-Men up to search for more survivors. Colossus and Shadowcat locate one group of survivors but are attacked by Arclight and Scalphunter, while Rogue, Storm, Wolverine and Callisto attempt to lead another group of survivors out of the tunnels. They are nearly hit by a stray optic blast, and Wolverine senses the presence of all the original X-Men nearby, including - inexplicably - Jean Grey. But before they can investigate, they are rejoined by Colossus and Shadowcat, having escaped from Arclight and Scalphunter, just as Harpoon, Riptide and Scrambler attack. 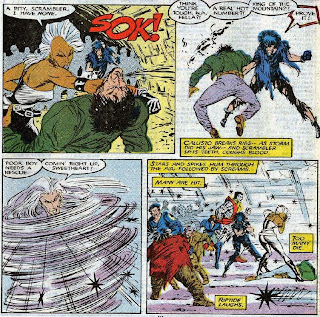 Riptide begins decimating the surviving Morlocks as Rogue and Scrambler's powers cancel each other out, leaving Rogue vulnerable to an attack from Harpoon. But Shadowcat intercepts the blast intended for Rogue. Just then, Colossus, fighting through a hail of shrapnel hurled by Riptide and enraged at the carnage around him, reaches the Marauder and snaps his neck, then turns to Harpoon, telling him he's next. However, Harpoon and Scrambler have retreated, and the X-Men realize Kitty is unable to unphase and become solid. Though Rogue wants vengeance on the Marauders, Storm says saving lives is still the priority, and orders the X-Men and wounded Morlocks back to the mansion. However, she pulls Wolverine aside and tells him they need a prisoner to interrogate, to learn more about the Marauders. One prisoner, she repeats. The rest are his.

Firsts and Other Notables
The Marauders make their first full appearance in this issue, as a group and individually: Scalphunter (creates weapons out of his costume), Riptide (spins really fast while hurling various sharp objects), Harpoon (throws harpoons that transform into energy), Arclight (creates seismic shockwaves), and Scrambler (negates super-powers by touch). Vertigo (creates vertigo in her opponents) is also a member, though she previously appeared as one of the Savage Land Mutates in Marvel Fanfare #3. Future issues of X-Men and X-Factor will reveal other members of the team as well. 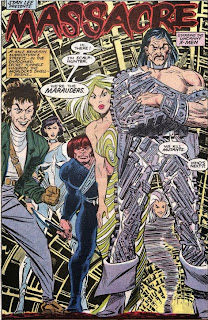 The X-Men suffer some significant injuries in the course of this issue. First, Nightcrawler, finding himself unable to teleport, is set upon by Riptide and gravely injured, which will lead to his departure from the team for quite a well (he'll eventually end up starring in Excalibur).

Secondly, Shadowcat is struck by one of Harpoon's, er, harpoons, and the resultant energy feedback prevents her from being able to return to a solid state, a condition which will force her to lead the team, serve as the focus of the upcoming Fantastic Four vs. the X-Men limited series, and, ultimately, lead to her joining Excalibur as well. 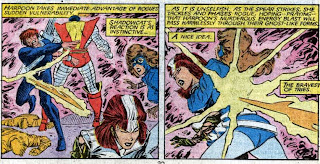 Finally, an enraged Colossus kills Riptide, but in the process sustains injuries that, as revealed next issue, will lead to him being paralyzed, removing him from the team as well (though Colossus will return to the book much sooner than Kitty and Nightcrawler). 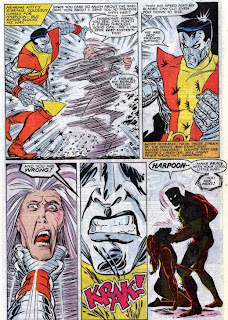 Additionally, countless Morlocks are killed, mostly off panel, with the only Morlocks of note whose deaths we see being Annalee, the older woman who kidnapped Power Pack in issue #195, and Piper. We also learn that Scalphunter killed Annalee's children (whose deaths were discovered in issue #193), prompting her actions with Power Pack. 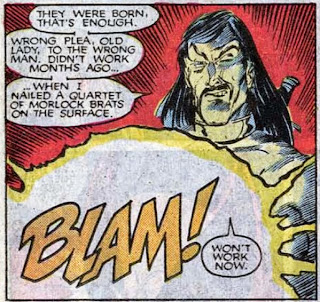 Though they go unseen, at one point, the X-Men are almost hit by a stray blast from Cyclops (who is also in the tunnels, as we know from X-Factor #9), while Wolverine also picks up what he believes is an impossible scent (Jean's), making this the most direct crossover yet between the two books (though of course neither team actually meets the other). 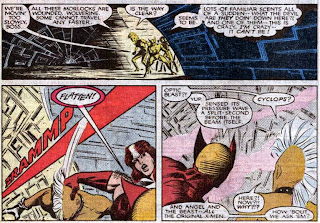 This issue includes a "map" for "Mutant Massacre", detailing the issues involved in the crossover and a reading order for the entire story (though I've never been able to make hide nor hair of the order based on this map myself). Though such guides to crossovers will eventually become common place (eventually landing almost exclusively on the internet), this is the first time a crossover featured anything like it. 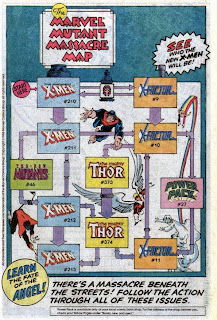 This is John Romita Jr.'s final issue as the book's regular penciller (for now - he'll return in the 90s), ending a run that stretches back to issue #175 and almost matches John Byrne's in terms of longevity. However, he shares artistic credit for this issue with future New Mutants penciller Bret Blevins (in fact, the GCD credits the pencils to Blevins, with Romita only providing layouts) while Al Williamson fills in on inks, lending JRjr's final issue a look different than the the usual Romita/Green fare.

"Mutant Massacre", overall, has a somewhat jumbled origin. As detailed here and discussed in the post on issue #200, it was born in part from the ashes of Claremont's intended follow-up to Alan Moore's "Jasper's Warp" storyline (as was parts of the later "Fall of the Mutants" crossover). It's also been said that this storyline was motivated in part by a desire to decrease the number of Morlocks, as Claremont never intended for there to be as many as appeared in their initial appearance (with Paul Smith taking artistic license and drawing larger numbers of Morlocks in the background of issues #169 and #170 than Claremont wanted).

The Chronology Corner
Following this issue, Wolverine appears in Power Pack #27 (which we'll look at in a few weeks), before appearing along with the rest of the X-Men in New Mutants #46.

A Work in Progress
There is now a straight-up barn on the mansion grounds.

It's noted that both Nightcrawler and Wolverine are recovering from their recent injuries, with Nightcrawler eventually taxing his power to the point that it fails, leaving him at the mercy of Riptide. 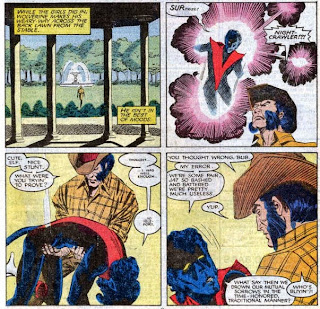 In one of the book's last nods at the fact that Xavier's is a school for some time, as the issue opens, Kitty is working on a term paper for Magneto.

Sharon Friedlander is on-hand to help the injured Morlocks, appearing for the first time in Uncanny X-Men, while Psylocke also makes her first appearance in X-Men proper, but does not accompany the team into the Morlock Tunnels.

Nor does Magneto, who stays behind to watch over the New Mutants, a perfectly reasonable action that nonetheless deprives the X-Men of significant power while battling the Marauders.

Teebore's Take
This issue kicks off "Mutant Massacre", the first linewide crossover amongst the X-books. Being the first, it is very prototypical: the connections between the books are tenuous, at best, and one could very easily only read one title's contributions and not be completely lost. And while the idea of a crossover, linewide or otherwise, isn't anything new at this time (crossovers between titles had existed since the earliest days of the Marvel Universe, and both Marvel and DC had experimented with sprawling crossovers previously, albeit ones built around a central miniseries rather than a line of titles), the tremendous commercial success of "Mutant Massacre" will lead to annual X-Men crossovers, and the continued success of those will lead to crossover pulling in more and more titles. Thus, the event-driven focus of the modern Marvel and DC Universes, in which each nearly every year has given us at least one linewide X-Men crossover and one that spans most of Marvel's publishing output, and in which it seems like every event doesn't so much end as setup the next one, for better and worse, can be traced back to "Mutant Massacre".

But as much as "Mutant Massacre" can be credited with/blamed for the event-driven focus of modern mainstream superhero comics, that wasn't the intention of Claremont. Rather, Claremont merely wanted the story to shake up the book (with the recently-arrived X-Factor writer Louise Simonson and a few others joining in on the fun, making the crossover element of the story almost an afterthought), and in that regards, he succeeds, making this issue, in terms of the construction of the team, arguably the most significant since Giant-Size X-Men #1. For all the changes the title has undergone since that issue, a core group of "New X-Men" has remained. The events of this issue disrupt that core, ultimately sending two of the longest-tenured X-Men (and Claremont's pet character) away. While one of those characters will eventually return to X-Men under Claremont's tenure, the other two, spun off into a new title, won't be back amongst the X-Men proper until long after Claremont is gone (in fact, their return will fall more closely to Claremont's initial return than his departure). The end result of this issue and "Mutant Massacre", then, will be a period of mutation for the team, with what emerges being an entity that barely resembles the status quo of this issue, one that will set the stage for some of Claremont's darkest, most ambitious and atypical (and, at times, maddening) stories yet.

But for all this issue's significance, both in terms of the future of the X-Men and comics in general, it's important to remember it's still a story first, and a cracking good one at that. In addition to its prototype feeling, "Mutant Massacre" is an odd storyline in that it's very front loaded: the battle between the X-Men and the Marauders is essentially confined to this issue: next issue, and the one after that, largely deals with the immediate fallout to these events, and features one-on-one battles over another huge confrontation between the teams (we also never learn the motivation behind the massacre, beyond the Marauders being ordered to do so, and won't for quite a long time). In that sense, the story (at least in the X-Men portion) begins and climaxes in one issue, but it's one heck of an issue.

While it lacks the artistic verve and clever action choreography of the previous storyline, there is a palpable sense of dread and despair hanging over this issue, as the Marauders callously slaughter the Morlocks with little reason, and the X-Men, in the face of such brutality, seem genuinely threatened, both in terms of their physical well-being and their principles, for the first time in a long time. Nothing sums this up more than the five panel sequence in which Colossus strides through a barrage of projectiles to reach Riptide, then angrily and easily snaps his neck. After pages and pages of death and defeat, it's a visceral "F&@% yeah!" moment, but at the same time, it's a moment of sadness, as Colossus, often called the gentlest of the X-Men, who once agonized over his part in the death of the insane Proteus, has killed with satisfaction. As the issue ends, countless Morlocks are dead. Nightcrawler is gravely injured. Shadowcat is unable to become solid. Colossus, injured himself, has killed in anger. The X-Men are reeling. Nothing, for comics or the X-Men, will be the same.

Next Issue
Tomorrow, the New Mutants get drawn into the massacre in New Mutants #46, followed in turn by X-Factor in X-Factor #10.
Newer Post Older Post Home
Posted by Austin Gorton at 12:00 PM