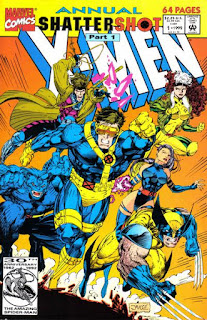 In a Nutshell
Arize escapes Mojoworld and is rescued by the X-Men.

Plot
As Mojo's forces capture rebel leader Quark, Mojo himself supervises the hunt for Arize, the scientist who first created the spined slave race now in rebellion. But Arize escapes to Earth before being captured, and Mojo vows to bring him home to make more slaves. Meanwhile, the X-Men are training in the Danger Room when Cerebro detects the arrival of Arize, somewhere in Afghanistan, and Professor X dispatches the team to investigate. They find him in the midst of a Muhajedin camp, his memory and mind scrambled by the effects of the travel to Earth. Just then, a team of hunters dispatched by Mojo to capture Arize, including a reprogrammed Quark and cameramen transmitting events back to Mojoworld live, arrive on the planet. As Psylocke telepathically learns that Arize knows Longshot, the hunters attack. The X-Men ultimately force them to retreat back to Mojoworld, but Cyclops stops Wolverine & Rogue from following, despite the potential of finding their lost teammate, saying their mission is to protect Arize. The X-Men then leave for the mansion with Arize in tow, while Mojo refuses to send another team to retrieve him, citing the public failure of the last one, declaring he'll create slaves for sport without his help.

2nd Story: Wolverine uses the Danger Room to teach Jubilee about the X-Men's greatest villains, concluding that their biggest enemy is fear and hatred.

Firsts and Other Notables
Continuing the format from the previous two years, Marvel's 1992 annuals tell a series of isolated stories across three or four chapters, usually winding through related titles' annuals. Thanks to the launch of X-Men vol. 2, the X-office now has enough series (at least, of ones that regularly publish annuals) to tell its own four part story without roping a Fantastic Four or New Warriors annual to round out the quartet, and the end result is "Shattershot", which begins here, then continues in Uncanny X-Men Annual #16, X-Factor Annual #7, and X-Force Annual #1. This is the last year of the "four part story" annuals, with next year featuring the somewhat infamous "introduce a new character in every annual!" approach.

The story is centered on happenings inside the Mojoverse, specifically Longshot's doomed rebellion against Mojo (as seen in X-Men #7) and the flight of his creator, Arize, to Earth, thus continuing Mojo's big year.

As such, while Longshot himself doesn't appear in this issue (aside from some memory flashes and references in dialogue), a number of characters from his original limited series, in addition to Mojo, do, including Arize (whose name, I've only recently realized, is a play on the fact that he created spined slaves for Mojo, enabling them to walk upright or "arise"), the ram-headed Quark, and animalistic bounty hunters Gog and Magog. Likely due to his role in this story (and his appearance on the Longshot-centric episode of the animated series), Quark will eventually receive his own action figure, one of the notable "even *they* got an action figure?!?" characters from the zenith of the line. 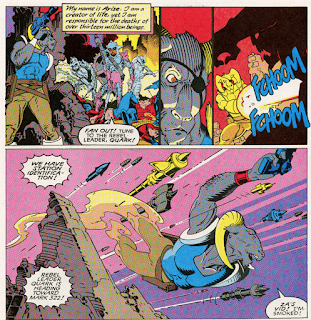 Mojo II, who at this point in time has already received his own trading card, makes his first appearance at the very end of the main story in this issue, though he only appears in shadows. 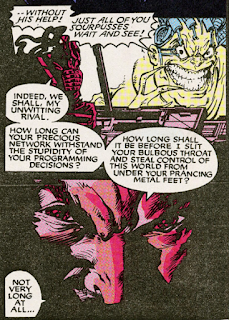 A backup story in this issue is a rundown of the X-Men's top ten villains of all time, setup as a Danger Room sequence presented to Jubilee by Wolverine. Several of Marvel's '92 annuals did a similar kind of story. The rankings are: #10 - Mojo, #9 - The Reavers, #8 - The Sentinels, #7 - the Brood, #6 - The Upstarts, #5 - Omega Red, #4 - Apocalypse, #3 - Mr. Sinister and the Marauders, #2 - Magneto and the Acolytes and #1 - Hatred/Intolerance (I seem to recall the other ranking backup stories trying to end with a similar "not an actual villain" approach, possibly to prevent declaring any one villain as specifically #1, but it mostly works here). 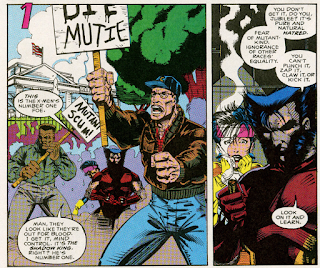 In addition to the two stories, this annual features several pinups, featuring art from Tom Raney, Greg Capullo and Andy Kubert, amongst others. The image of Gambit in the Kubert pinup is one of those that I think got reprinted a lot in various licensed and marketing material. 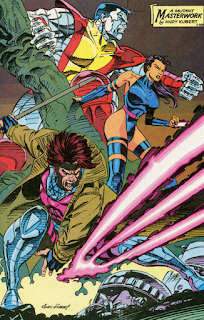 There's also a pair of Marvel Handbook-style cutaways, featuring the X-Mansion  and the Blackbird. 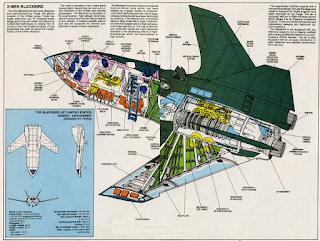 Jim Lee provides the cover and a pin-up to the issue, but otherwise is only credited with layouts. Still, that represents the most direct involvement of a series' regular artist in one of its annual since possibly ever (at least amongst the X-Books).

X-Force scripter Fabian Nicieza writes this issue, his first work on the Adjectiveless series (he will soon become the new regular writer of the series).

Current (and longtime) Amazing Spider-Man writer Dan Slott writes the backup story, some of his earliest work at Marvel.

The Chronology Corner
The main story takes place between issues #7 and #8 of the regular series,

The second story is considered to take place at the same time, with Wolverine and Jubilee appearing there after a string of appearances in Wolverine's solo series that come after X-Men #7 and before #8. However, they are both wearing older costumes in the story - Wolverine his brown-and-orange one, Jubilee the standard yellow-and-blue X-Men uniform from just before the linewide relaunch. However, it has to take place after issue #7, since Omega Red is referenced as one of the X-Men's top villains. Presumably, this was either commissioned back before the costume changes (and Omega Red was either slotted in after the fact, or included even before his first official appearance), or the artist was working off outdated model sheets.

A Work in Progress
Quark exclaims "Za's Vid!", a favorite oath of Shatterstar's, a nice bit of continuity likely the result of Nicieza writing this issue as well as X-Force.

Mojo notes that without Spiral to help guide Arize through the dimensional pathways between Mojoworld and Earth, he could lose his mind; when he arrives on Earth, he has lost his memory, which becomes a plot point in the story.

Both Wolverine and Psylocke (who were his teammates during the Outback Era) are upset that Cyclops won't let them pursue Mojo's forces, hoping to find their lost teammate, another nice use of continuity.

In the second story, Wolverine mentions that his only encounter with Apocalypse thus far was a robot duplicate, a reference to The Jungle Adventure.

The Grim 'n' Gritty 90s
The X-Men have to tread lightly in Afghanistan due to recent events, and the Soviet invasion of the country is referenced.

There's a funny bit where Quark comes across the X-Men, and stutters out "the X--, the X--" and Beast finishes "Men, Force, Factor, it all does get so confusing". He then declares that "Factor does it with a modicum of humor, Force with an overabundance of testosterone", and the Men with a style and panache the others try, and fail, to emulate. 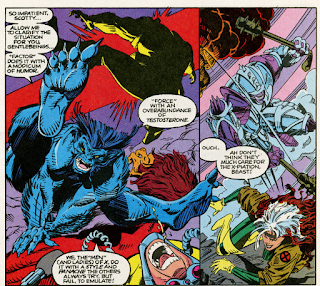 The Upstarts, ranked at #6 in the X-Men villains list, features at least one person we've never seen before (I'm also not sure why the guy I assume is Shinobi has some kind of energy power). It's possible she's supposed to be Sienna Blaze, but she looks nothing like the Blaze featyred in the trading card, or the one who actually appears in a comic next year.

The Best There Is, Mon Ami
Gambit describes himself as an X-Man "by default more than desire". 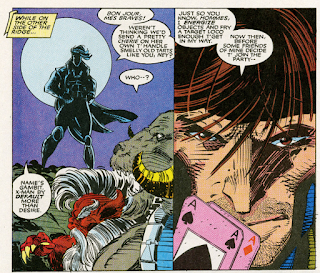 Young Love
Rogue & Gambit do a fair amount of flirting throughout this issue, both during the Danger Room sequence and latter during the fight with Mojo's forces. 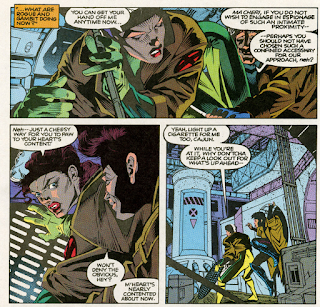 Like a Phoenix, From the Ashes
When Jubilee suggests that Dark Phoenix is the X-Men's #1 villain, Wolverine remarks that she's "played out", possibly a reference on Slott's part to the franchise's repeated returns to that particular well over the years. 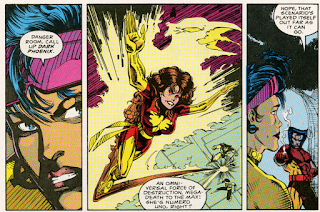 Austin's Analysis
"Shattershot", as we'll see, isn't a terribly good story, with some decent bits here and there that never quite coalesce into a cohesive whole, in part because the Mojoverse, despite the apparent push from the editorial office around this time, isn't the most captivating or rich setting around which to build a four (double-sized) part story. But this introductory chapter is fine. I'm not a huge fan of artistic jam issues (at least not in service of an otherwise straightforward plot) and I wonder just how big an impact Jim Lee had as the layout artist, but this gets the job done, introducing the central conflict of the story and the character the narrative is centered on (Arize), giving each of the members of the team a spotlight moment, and setting things up for the next chapter of the story. It's pretty basic and formulaic, but it's not bad.

If anything, its biggest sin is how unremarkably good or bad it is. Honestly, I'm much more interested in the tossed-off backup story ranking the X-Men's villains, since it's such a fascinating snapshot of the times. Of course, the still mostly unformed Upstarts get a slot, complete with an unrecognizable character. Even more of its time is Omega Red at #5, a villain the X-Men have faced precisely once (and may not have even debuted at the time this story was created). Mojo probably doesn't warrant even the #10 spot, but given the focus of the annual's main story, he probably had to be included. The Brood are likely here because they're slated to be the villains of the upcoming Ghost Rider crossover (see also: the Jim Lee trading cards and "Things to Come" pinup in X-Men #1), but all three of their encounters with the X-Men are fairly significant, and are enough to warrant their inclusion for reasons beyond marketing ones. The Reavers getting the #9 spot is actually a surprising show of respect, given how callously and seemingly-disdainfully they were dispatched in Uncanny #281, but given how much they dominated the non-team years, they deserve the spot, at least in 1992.

More telling are the absences. Dark Phoenix gets acknowledged and the Hellfire Club was likely considered replaced by the Upstarts at the time, but Proteus (whose reprinted appearances in Classic X-Men and return in the previous years' annuals weren't that old at the time) is missing, as is Arcade (who may not be a favorite of mine but certainly fought the X-Men in various iterations several times through the years). More glaring is the absence of the Brotherhood of Evil Mutants (aka the X-Men's direct thematic opposite) and Juggernaut, but maybe those two were considered the province of X-Force at the time (while Apocalypse, whom the X-Men have yet to technically face, got ported over when the original X-Factor rejoined the team).

All in all, it's a fascinating look at what the X-office considered the top villains at the time (I'm assuming the list isn't entirely Slott's own creation), a curious and sometimes maddening look at a transitional period, when the old classics still loomed large even while new creators were trying to break new ground, only to abandon that ground before doing much actual breaking of it. In the end, it's much more interesting than the otherwise cromulent main story.

Next Issue
Arize's story continues in Uncanny X-Men Annual #16. Then Spiral gets the spotlight in X-Factor Annual #7, and finally, we leap into the future in X-Force Annual #1.