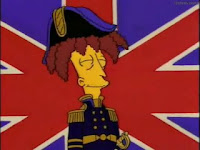 Or the One Where
Sideshow Bob is released from prison and tries to kill Bart (the first time), prompting the family to relocate to a houseboat.

The Setup
Bart receives a series of threatening letters, which are revealed to be from an up-for-parole Sideshow Bob.

Notable Notes
Kelsey Grammar reprises his role as Sideshow Bob, making his third appearance on the show (after season 1's "Krusty Gets Busted" and season two's "Black Widower"), and the first in which his appearance didn't involve a mystery that needed to be solved.

As the title suggests, this episode is a parody of the 1962 film Cape Fear and its 1991 remake (starring Nick Nolte and Robert De Niro), and elements of Bernard Hermann's score from the original film (which was also used in the remake) are used in the episode, which, moving forward, will become Sideshow Bob's musical theme. Though I gather it hit the overall beats of the films rather well, I've never seen either version, and its a testament to the quality of the episode that you really don't need to be familiar with the source of the parody to enjoy this episode.

Per the DVD commentary, this episode was produced as part of season four and held over, the last such episode, which also makes it the last episode to be worked on by the show's original writers, many of whom left between seasons four and five. As a result, the episode contains several more cartoonish and slapstick-y bits that ordinarily wouldn't have been put into an episode, but the departing staff figured they had nothing to lose by including them. The writers also had a difficult time stretching the episode to the allotted running time, leading them to extend certain sequences to fill time, including the first act montage of people Bart thinks are trying to kill him and the famous rake sequence.

In addition to Cape Fear, this episode references elements of the films' Psycho (Bob stays at the Bates Motel), Nightmare on Elm Street (Flanders' finger razors), Friday the 13th (Homer's hockey mask and chainsaw), The Night of the Hunter (Bob's hand tattoos) and, of course, the Gilbert & Sullivan operetta H.M.S Pinafore.

For anyone who plays Tapped Out (the Simpsons world building mobile game), Moe's task to smuggle endangered species comes from this episode, as he's shown to be (randomly and hilariously) keeping pandas in his back room, which he sets free after Lisa calls, believing him to be behind the threatening letters, telling him the gig is up (and if you do play Tapped Out, feel free to friend me on the game. I'm austingorton (clever, I know)).

This episode introduced the phrase "fatty-fat-fat-fat" (which is what the playground girls are calling Bart, according to Milhouse) to my lexicon, often used to describe either myself, or one of my cats (the fat one, natch). 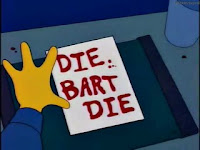 Favorite Quotes
Marge: Lisa, you got a letter.
Lisa: It's from my pen-pal Anya!
Anya: [voice over] Dear Lisa, as I write this, I am very sad.  Our president has been overthrown and [gruff voice of a man] replaced by the benevolent general Krull.  All hail Krull and his glorious new regime!  Sincerely, Little Girl.

Bart: But who'd want to hurt me?  I'm this century's Dennis the Menace.

Blue Haired Lawyer: But what about that tattoo on your chest?  Doesn't it say, "Die Bart, Die?"
Bob: No, that's German, for "The Bart, the."
Parole Officer: No one who speaks German could be an evil man. Parole granted!

Homer: Hey kids, wanna drive through that cactus patch?
Bart: Yeah!
Lisa: Yeah!
Sideshow Bob: [from under the car] No!
Homer: Well, two against one! 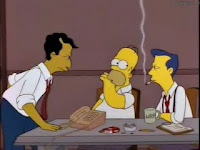 Teebore's Take
This episode is one of a handful that enters into consideration for the title of my favorite Simpsons episode of all time. It's certainly my favorite of a handful of superior Sideshow Bob episodes, and the famous rake sequence, in which Sideshow Bob emerges from beneath the Simpsons' car only to be whacked in the face by a seemingly never ending series of rakes (he's actually whacked nine times in the original non syndicated version), still stands as the piece of comedy which has elicited the loudest, longest laugh ever from me when I first watched it (it was also one of my first encounters with what I now know is endurance humor).

While this episode lacks that little spark of heart that is found in many of the best Simpsons episodes, and is more concerned with straight-up parody than any satirical elements, it is filled wall-to-wall with laughs, even beyond the rake sequence: Homer's inability to learn his new alias ("I think he's talking to you"), Sideshow Bob's repeated Looney Tunes-esque injuries (Homer dumping his hot coffee on him, driving through the cactus field, the rakes, the parade (another example of endurance humor)), Bart stalling for time for by having Bob perform the entire score to H.M.S Pinafore ("a plan fiendishly clever in its intricacies"), before the Simpsons' houseboat runs aground near a brothel (where all the cops conveniently are). This may not be the series' best episode (then again, it may be), but its certainly one of its funniest, and a perfect example of a show at the top of its game.

The pinnacle of Sideshow Bob episodes (which is a fairly tall peak) and one which is always in the discussion of "best episodes ever". 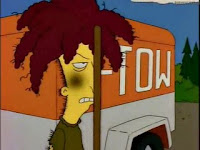