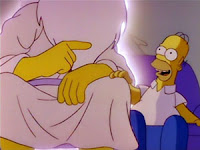 Or the One Where
Homer starts his own religion.

The Setup
After skipping church and subsequently experiencing the greatest day of his life, Homer decides to start his own religion.

Notable Notes
The chalkboard gag in this episode's opening, in which Bart writes, "I will not defame New Orleans" is a reference to the controversy surrounding one of the songs from last episode, and was rushed into production to serve as an apology.

When Homer first meets God in his dream, God has five fingers.

Other than "Mr. Plow" later this season, this is one of the few Simpsons episodes outside of Thanksgiving or Christmas ones to prominently feature snow. In fact, I think about this episode (specifically, Homer's good times at home while the rest of the family is freezing at church) any time the snow is swirling outside and I either get to stay in (yay!) or have go out in it (boo!).

Something I sadly never noticed before until Mrs. Teebore pointed it out to me during a recent rewatch of this episode: near the end, when Homer accidentally sets the house on fire while the rest of the family is at church, he is rescued by Flanders. Except that, of all the people in town, Flanders should be at church, too. 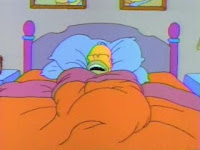 God: Thou hast forsaken My Church!
Homer: Uh, kind-of... b-but...
God: But what!
Homer: I'm not a bad guy! I work hard, and I love my kids. So why should I spend half my Sunday hearing about how I'm going to Hell?
God: Hmm... You've got a point there.

Homer: Kids, let me tell you about another so-called "wicked" guy. He had long hair and some wild ideas. He didn't always do what other people thought was right. And that man's name was... I forget. But the point is... I forget that, too. Marge, you know what I'm talking about. He used to drive that blue car?

Marge: Homer, please don't make me choose between my man and my God, because you just can't win.
Homer: There you go again, always taking someone else's side. Flanders, the water department, God...

Ned: Homer, God didn't set your house on fire.
Rev. Lovejoy: No, but He 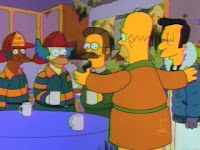 Teebore's Take
This episode, with its portrayal of a down-to-earth, football-loving God, Homer's quest to celebrate his faith in his own way and the notion that God works in the hearts of people of all religions, has probably done more to shape my own personal faith than any story in the Bible. For the first time, The Simpsons takes on some fairly Big Ideas and applies its fractured, satirical perspective on modern life to the subject of religion. The results are genuinely intriguing and theologically complicated, but it's a testament to the quality of the show at this point that it manages to be damned funny while also intelligently tackling a subject from which many shows shy away.

The Simpsons tackles religion head on for the first time, and the end result is an episode that is both highly thought-provoking and downright hilarious. 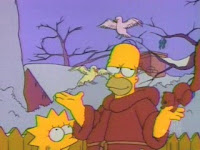