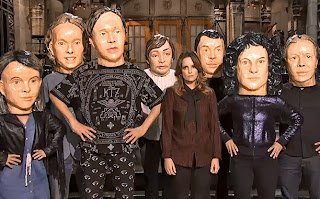 This season represents one of the biggest transitional years in SNL's history. With the departure of longtime stalwarts Bill Hader, Fred Armisen and Jason Sudeikis (and possibly Seth Meyers later this season), only a year after Kristen Wiig and Andy Samberg departed, there is a huge influx of new talent. All of last season's featured players, including breakout ladies Cecily Strong and Kate McKinnon, have been elevated to regular status. Keenan Thompson is now the longest tenured cast member, while Taran Killam, following through from his breakout year last season, is poised to be the new male lead with Hader's departure. And there's six new featured players, all looking to fill the void.

That this is a transitional year filled with new faces is clearly not lost on the writers, as that fact dominated this season premiere, featuring into both the monologue and a sketch of its own, to mixed results. The joke in the monologue was good, but strung out, while the gag in the sketch would have been funnier if I wasn't already able to identify the new cast members (at least by appearance - in terms of names they're still "The Guy From The Phone Commercial, The Guy Who Was a Writer For A Long Time, the Girl, and the rest) thanks to the monologue, but was saved by the bit with Lorne. It was probably both necessary (and a good idea) to address this particular elephant in the room, but hopefully this is the last time the show will go to this particular well this season. You've made your jokes about the rookie cast; now lets see them earn their place.

Other Thoughts
In terms of hosting, Tina Fey did fine. As she joked in her monologue, it isn't like she has a ton of characters to reprise, so really, only her appearance on Weekend Update played to her status as a returning cast member. Beyond that, she did the kind of stuff any host would be asked to do, though for the most part, managed to elevate her roles, like the used car salesman's wife, above the material itself.

Aaron Paul acquitted himself well, stepping in as this episode's "celebrity guest who isn't the host but who shows up when the host is a recurring cast member or favorite". I wouldn't mind seeing him have a shot at hosting someday.

The first new cast member to make an immediate impression was Noel Wells, thanks to her Lena Dunham impersonation in the Girls parody. I haven't ever seen the show, but that sketch was still very nearly my favorite of the night.

Speaking (again) of the new cast, this has been said a million times already (and acknowledged by the show via Lorne's joke in the new cast member sketch), but it's a shame there isn't more diversity in the new hires or the show as a whole. The last couple years have gone a long way towards addressing the show's gender gap, with the women arguable more established at this point than the men (except for poor Nasim Pedrad, who wasn't in the episode at all). But it would have been nice to see the show add someone of a different ethnicity beyond five nearly identical white guys and a girl.

The only other new cast member to get a highlighted performance was Kyle Mooney, as one of the night's two Weekend Update guests, playing an outdated, schticky stand-up comic. On paper, the premise isn't a bad one (and is similar to Fred Armisen's Nicholas Fein), but in execution, like Fein, it doesn't really work. When the joke is that the joke's not funny, well, the jokes not terribly funny.

Thankfully, the other Weekend Update guest was Drunk Uncle, one of the few remaining (and one of the better) recurring Update characters (which reminds me: while we may have lost Stefon and, presumably, Cecily Strong's Girl at a Party etc., we also lost that stupid "childhood friends of the bad person du jour express support then whisper bad things about the person" bit with the departure of Armisen).

Weekend Update on the whole was perfectly cromulent, nothing too outrageous either way. Cecily Strong was competent if a bit stiff, which is understandable. It'll be interesting to see how she grows into the role over the course of the season, especially if the plan is for her take over for Seth outright.

There were some decent bits in the "boarding the plane" sketch, including the central gag of "Group 2" being the absolute last group to board a plane, throwaway lines like, "X-Men: First Class and X-Men: Business class", and broad stuff like Keena's comically-large carry-on.

Least Favorite Sketch: Nothing absolutely terrible this week, but the "Cinema Classics" sketch didn't work all that well. It was one of those "weird last sketches of the night" slotted in earlier, with a goofy premise that didn't quite land.

Favorite Sketch: Holy crap you guys, that E-Meth commercial had me laughing so hard it hurt. Easily my favorite of the night.

Gate Attendant: Business travelers, please board so you can begin working on graphs.

Drunk Uncle: Nowadays, it’s just, can I get some Swiss chard on my Roku? Is that Amazon Prime pumpkin spiced?

Drunk Uncle: You went to school until you were 8, and then you got married to a factory!

Ree De’What: I’m not a good guesser. Just ask my wife. She asked me to guess her weight, and I said, ‘just your ass, or everything?'