Or the One Where
Marge stars in "Oh, Streetcar!", a musical version of A Streetcar Named Desire.

The Setup
Feeling isolated, Marge auditions for a community play, much to Homer's annoyance.

Notable Notes
This was another episode held over from the third season production run. It was also, along with "Mr. Plow", one of the first Simpsons episodes to be submitted for an "Outstanding Comedy Series" Emmy, thanks to a rule change that allowed animated series to be submitted as comedy series. Though The Simpsons had (and continues to have) success with the Emmys, it's generally considered that voters weren't ready to judge animated episodes alongside live action, and neither episode received a nomination.
Jon Lovitz returns, voicing both theater director Llewellyn Sinclair and his sister, who runs the daycare facility in which Maggie is placed.

Before the episode aired, a newspaper in New Orleans published the lyrics to the opening song of the musical, which is less-than-flattering towards the city (referring to it as a city "that the damned call home" and "the Sodom and Gomorrah on the Mississipp'"). It prompted several complaints to the local Fox affiliate, and the president of the network issued an apology to anyone who was offended.

Both Matt Groening and producer James L. Brooks count this episode amongst their all time favorites. 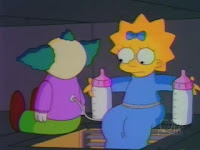 Favorite Quotes
Llewellyn: I am not an easy man to work for. While directing "Hats off to Channukah", I reduced more than one cast member to tears. Did I expect too much from fourth-graders? The review "Play enjoyed by all" speaks for itself.

Bart: Are there any jive-talking robots in this play?
Marge: Mm, I don't think so.
Homer: Bart, don't ask stupid questions. Is there any frontal nudity? 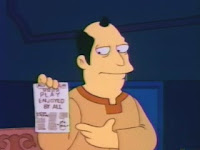 Teebore's Take
Marge episodes tend to be pretty hit or miss (with the vast majority missing), but this is one of the better Marge-centric stories, as it's still relatively grounded in reality (Marge joining a local theater production is a far cry from accidentally getting breast implants or befriending manatees) and comes at a time where Marge getting pissed off at Homer being a selfish ass isn't as played out as it is these days. Plus, it features a rare Maggie B-plot. Along with the fantastic original songs and deep pop culture references, there's barely a dip in quality from the fantastic season premiere.

The Simpsons, at this point, had already begun writing some fantastic original songs (such as "Flaming Moes"), but starting this season, the use of original songs will come to be seen as a hallmark of the Golden Age episodes. Here, the "Oh, Streetcar!" songs manage to be both well-written and funny (the Stella/yella/hella rhyme stills cracks me the hell up to this day), while also managing to serve as a brilliant parody of musical theater.

This is also the episode I always think of as a defense against those critics (mainly from early in the show's run) who deride The Simpsons as nothing more than simplistic, crass entertainment. Back in the day, this episode single-handedly introduced me to the works of Tennesse Williams, Ayn Rand and Steve McQueen (plus some Hitchcock, but I'd already seen The Birds). It's great proof that there's more to this show than "don't have a cow, man".

One of the best Marge episodes that's also a hilarious parody of musical theater, packed with tons of pop culture references and great original songs. 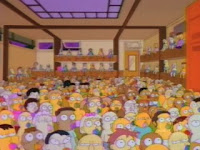