In a Nutshell
X-Factor celebrates Christmas.

Plot
On a rooftop near the Empire State Building, Marvel Girl and the X-Factor kids join the rest of the team and a group of reporters. The kids introduce themselves to the reporters, including Trish Tilby, before Iceman creates a massive ice Christmas tree to replace the Empire State Building's damaged antenna. As X-Factor heads back to the ship, Cyclops spots a TV broadcasting Madelyne's message imploring him to find their son. Shocked, he leaves to be alone. Meanwhile, Iceman brings the kids past the children's ward of Roosevelt Hospital, containing children injured or orphaned by Apocalypse's attack, en route to the ship. Arriving, the kids acclimate themselves to the ship's computers while Jean, motivated by Maddie's message, visits her parents, revealing her resurrection. Back in Manhattan, the kids are surprised by a massive delivery of Christmas gifts donated by the public following their earlier interview. 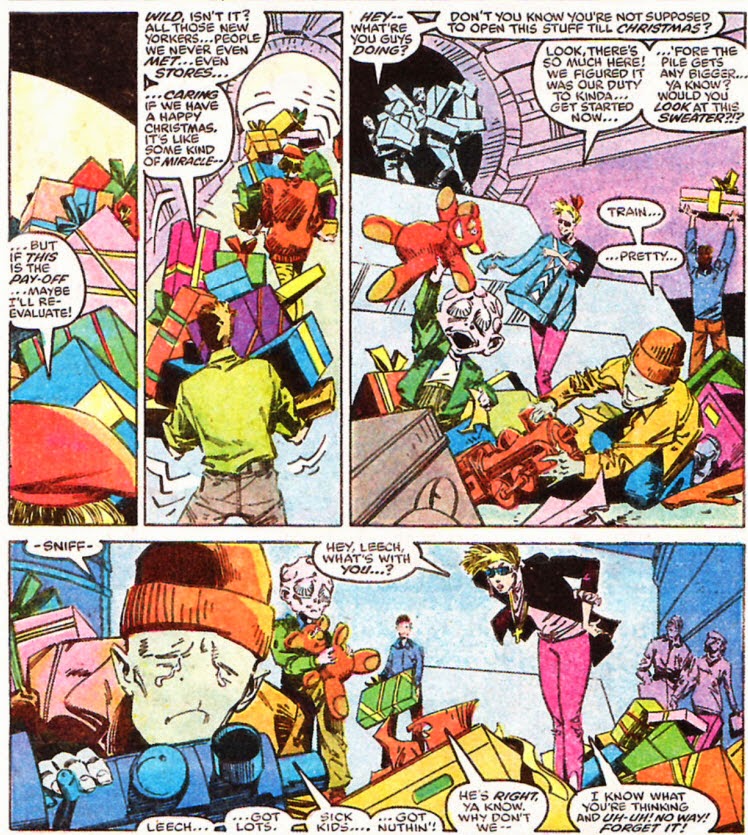 However, led by Leech, they decide to donate the gifts in turn to the children at the hospital. Later that night, they sneak out, just as Jean arrives back at the ship only to find them missing. She rouses Beast and Iceman as the kids are confronted by a gang of muggers on their way to the hospital. They defend themselves, but X-Factor arrives before the situation escalates, scaring off the muggers. Once they explain what they're doing, Jean's anger abates, and they all deliver the presents to the joyous children at the hospital. While there, Cyclops appears, telling Jean he's leaving immediately for the airport to try and find his son. Meanwhile, Apocalypse watches as his former ship completes repairing itself. His gift to X-Factor now ready, he toasts what may well be their final Christmas.

Firsts and Other Notables
Last seen in issue #23 in Virgina as X-Factor was teleported away by Apocalypse, this issue features the return of the X-Factor kids, as they adjust to their new home and the public spotlight on them in the wake of X-Factor's newfound fame. It's established that X-Factor asked the police to retrieve the kids from Virgina after the battle with Apocalypse and bring them to New York.

Throughout the issue, there are panels along the bottom of certain pages depicting Apocalypse's ship repairing itself. As the issue ends, Apocalypse and his Horsemen, watching from afar, declare the ship fully repaired and ready to strike - which leads into the events of next issue. 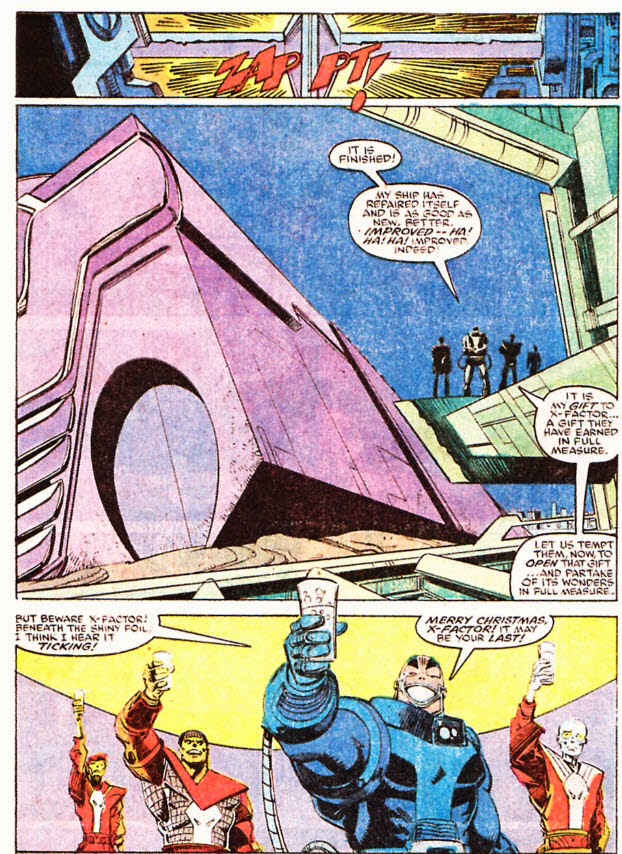 We get a brief scene with Dark Angel, watching from afar and pissed off at the way X-Factor has embraced their fame.

Scott finally sees Maddie's message to him from Uncanny X-Men #227, learning that she wasn't dead after all (though now, of course, he thinks she is again), and that their son is in fact alive. This kicks off a "search for Cyclops' still unammed baby" plot thread that will carry us all the way into "Inferno". 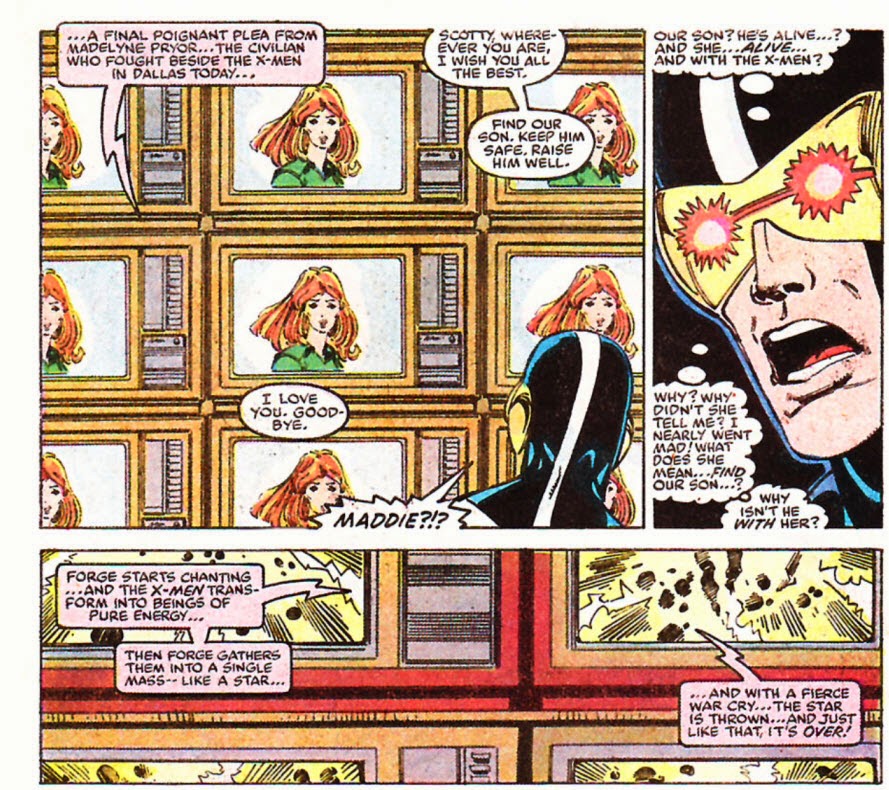 The rest of X-Factor also learns the X-Men have died, and are given a chance to react to it. Iceman, somewhat smartly, refuses to believe it. 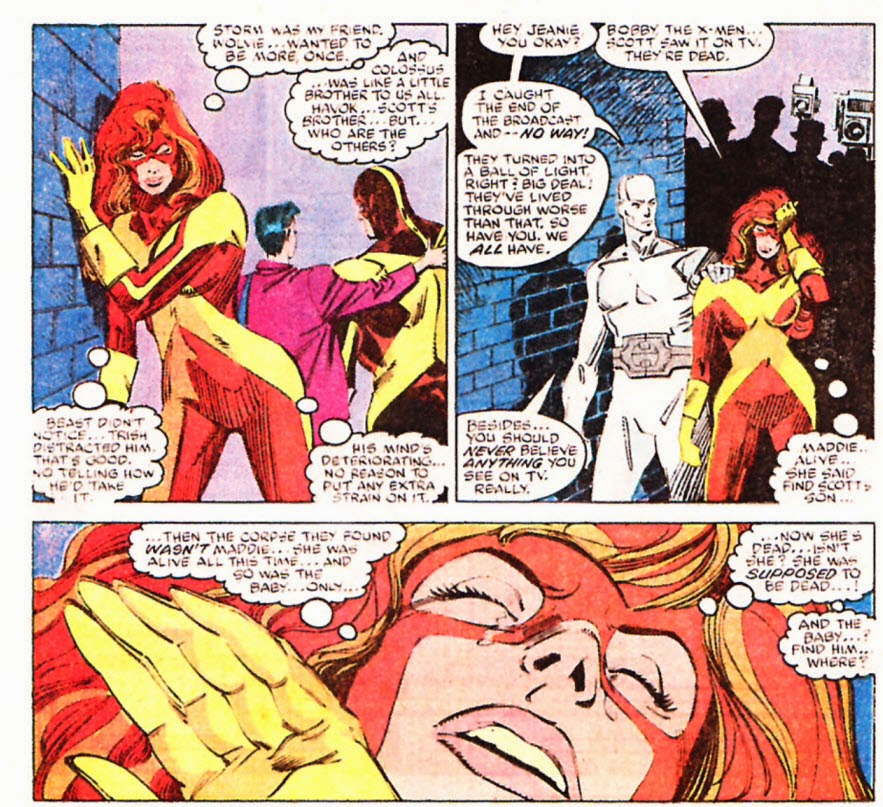 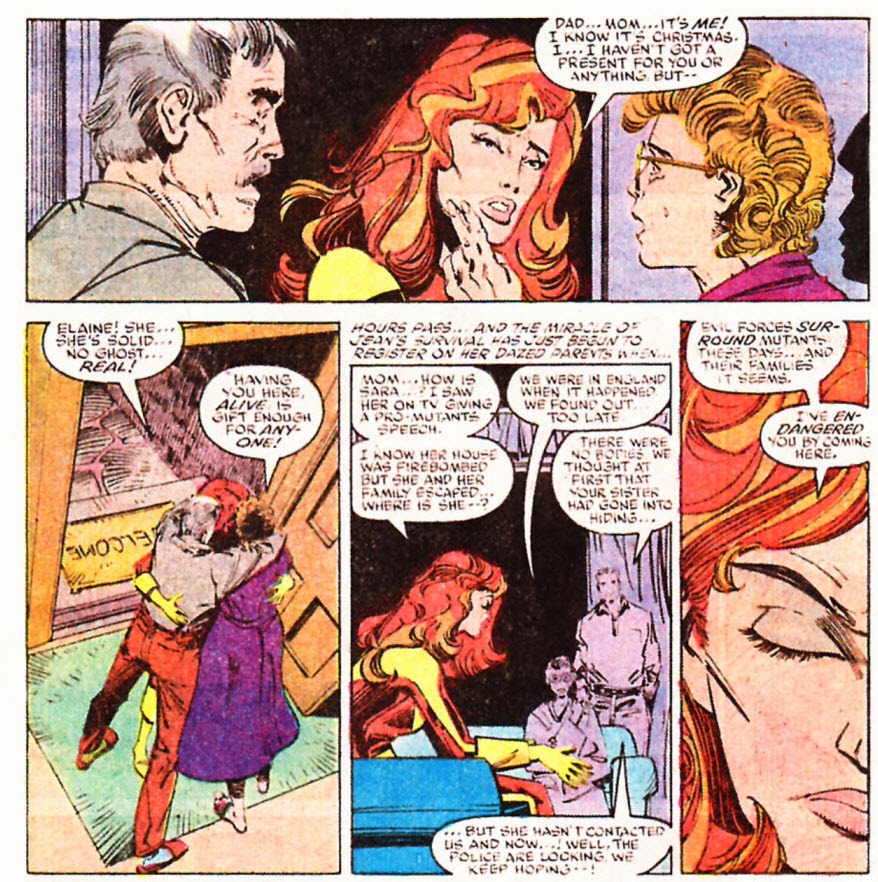 This issue takes place around Christmas (it was on sale in December of 1987). Uncanny X-Men #230 will also be set at Christmas, though it was on sale later and obviously doesn't quite line up with this issue.

A Work in Progress
In public, Rusty is seen wearing a little domino mask (since he's still technically a fugitive).

Leech is shown being able to be carried telekinetically by Jean, so long as he stays far enough away from her, suggesting his power only stops someone from using theirs, rather than negating the effective of the power itself (though later, Jean is seen hugging Leech while floating, so I guess he's gotten really good and tightening up his dampening field). 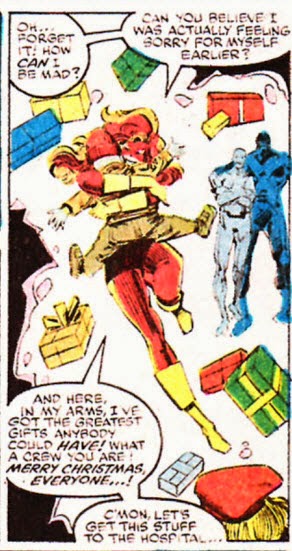 Jean's missing sister Sara, her kids, and Candy Southern, as well as Scott's son, are also acknowledge as still missing, and Jean wonders if Scott's grandparents really are on a cruise, or if they've disappeared as well.

I Love the 80s
The reporters ask the kids to explain what a mutant is, just in case any of their viewers, or anyone on the other side of a fourth wall that is overhearing this, didn't already know. 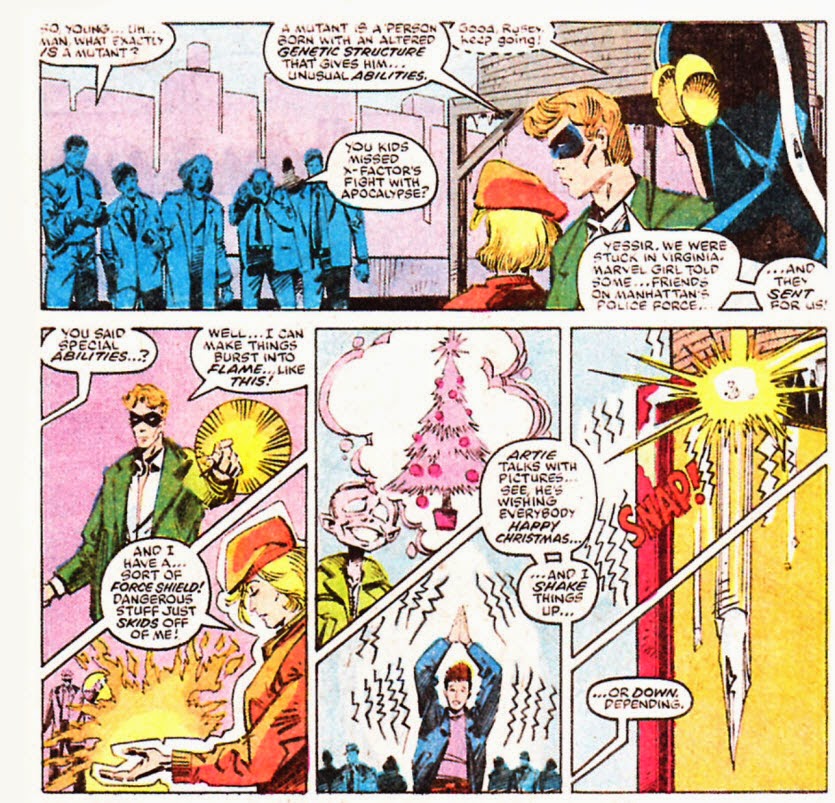 The kids drop what is either 80s slang or made-up Simonsonian 80s slang like "crush" and "treacherous". Rictor also compares the ship to something out of a Star Wars movie, and later, they're able to pickup a broadcast of A Charlie Brown Christmas. "Professor Xavier Rusty Collins is a jerk!"
Seeing Scott and Jean together, Rusty starts babbling about how Scott never loved Maddie, like he has the first clue what's going on. 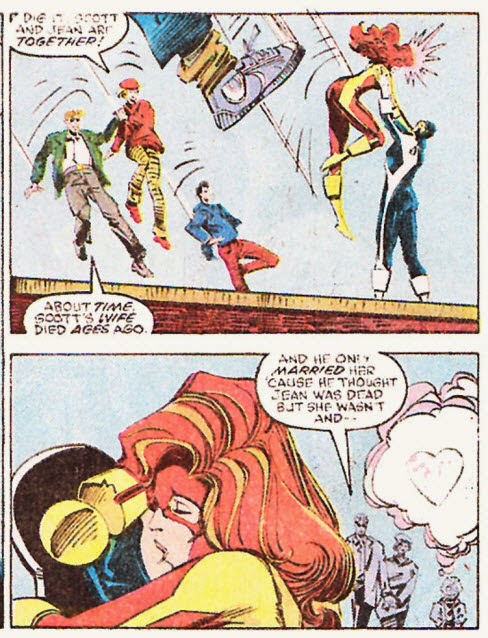 Human/Mutant Relations
A group outside Apocalypse's ship chastise the cops for helping X-Factor, saying they should be looking after their own kind.

Teebore's Take
Rather than a fill-in story or a check-up on a departed character, Louise Simonson uses her first post-"Fall of the Mutants" issue to give us a Classic Claremont Quiet issue. Set at Christmas, this one is jam packed with subplot and character development, as X-Factor continues to adjust to their new status quo as public heroes, the kids get introduced to their new headquarters, which may not be as benign as it appears, Cyclops learns his son is still alive and Jean finally tells her parents she's alive.

Though this isn't a "kids-centric" issue on the same level as issue #16 or #20, it is one of the better uses of them. Maybe it's just because I'm a sucker for sappy Christmas sentimentality, but most of the beats here work for me: Leech realizing the kids at the hospital don't have any gifts, even though he's never had a true Christmas himself, is genuinely touching, and Boom-Boom, who is usually insufferable, hits just the right level of indignation at giving up her presents (having of course suffered through some bad Christmases on the streets herself) before ultimately acquiescing. Even if you roll your eyes at the sentiment, there's enough little tidbits of other stuff, rendered in that classic style of the downtime issue, to ride it out.

Next Issue
Uncanny X-Men #229 finds the X-Men eating some Vegemite sandwiches, New Mutants #63 is another fill-in, and X-Factor #28 has the team battling their new headquarters.
Newer Post Older Post Home
Posted by Austin Gorton at 12:00 PM