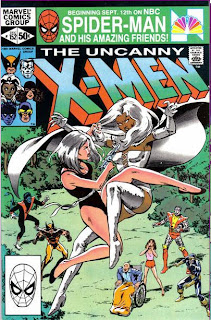 In a Nutshell
Kitty and Storm-as-White-Queen help free the X-Men from the Hellfire Club.

Plot
White Queen, in Storm's body and having learned of Storm's escape from the Massachusetts Academy, attacks the car being driven by Storm in White Queen's body. When the unconscious Kitty awakens and sees who she believes to be the White Queen driving, she phases out of the car, causing Storm-as-White Queen to crash. White Queen-as-Storm, clumsily reacting to the resulting fireball, flies away. Kitty comes across the unconscious body of Storm-as-White Queen and contemplates leaving her to die, but ultimately saves her and eventually accepts that Storm's consciousness is trapped in the body. At the mansion, Sebastian Shaw and White Queen-as-Storm gloat over the captured X-Men, with Harry Leland and a trio of guards mercilessly beating Wolverine to death.

Meanwhile, Kitty and Storm have been picked up by Stevie Hunter, and they arrive on the mansion grounds. As Storm and Kitty work together to sneak into the hangar, they are attacked by Shaw and White Queen, but manage to escape. Kitty reaches the mansion and encounters a still-alive Wolverine, whose death was faked by Amanda's magic. Kitty phases through the X-Men's power-inhibiting restraints, freeing them, and they attack the Hellfire Club, quickly gaining the upper hand. However, White Queen loses control of Storm's powers and accidentally injures Shaw. Storm must use White Queen's telepathy to help her calm the storm she's created, before using the purloined Persona Exchange Gun to switch their consciousnesses back to their original bodies. In the end, the X-Men allow the Hellfire Club to leave, unable to expose the club without also exposing themselves, though White Queen agrees to let Kitty remain at Xavier's school.

Firsts and Other Notables
Cole, Macon and Reese, the three Hellfire Club guards Wolverine attacked in issue #133, turn up alive, having survived Wolverine's attack thanks to a series of bionic implants that give them super-human strength and durability. They will eventually join the Reavers, a team of cyborgs that serve as one the principal antagonists for the X-Men towards the end of Claremont's run. It's also revealed that Harry Leland, last seen being taken away from the Hellfire Club by paramedics in issue #135, is alive and well. 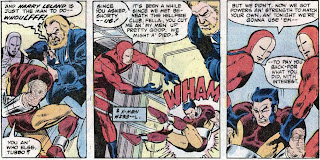 A Work in Progress
Not realizing that Storm is trapped in White Queen's body, Kitty debates leaving her to die but ultimately decides to save her from the car wreck. 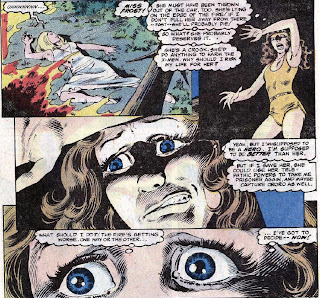 Storm helps establish her identity by easily slipping out of a knot she taught Kitty.

At the issue's end, White Queen agrees to let Kitty stay with the X-Men, even though last issue established that her parents were sending her to the Massachusetts Academy of their own free will, meaning neither Xavier nor White Queen have any say over where Kitty goes to school.

I Love the 80s
It is revealed that the Storm/White Queen mind swap was facilitated by a persona exchange gun. 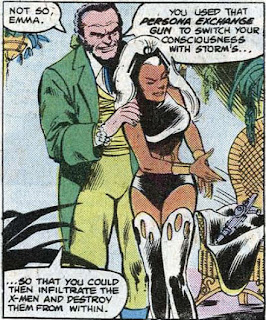 Later, after scuffling with White Queen-as-Storm, Storm-as-White Queen retrieves the gun off panel, it's existence and location gleaned telepathically from the White Queen's mind, making it's sudden appearance at issue's end seem rather random and/or rushed.

After their minds are switched back, Storm is able to resist White Queen's telepathic attack for...some reason. 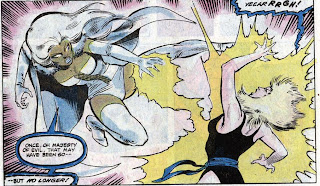 The X-Men are forced to let the Hellfire Club go, because they can't turn them into the authorities without revealing themselves. It makes sense, but still seems...sketchy. 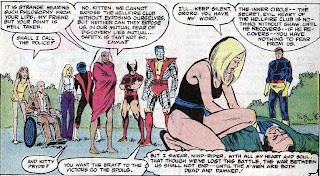 The Awesome and Terrible Power of Cyclops
Cyclops displays a nice bit of strategy by having Colossus toss Shaw into the lake so he has to burn off his excess energy swimming to shore. 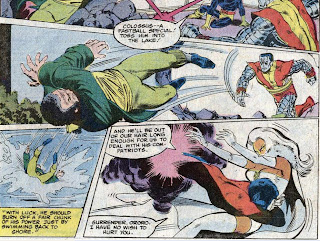 The Best There Is At What He Does
Wolverine argues with Storm about why, essentially, it's okay for him to kill but she shouldn't, beginning a complex relationship between the two dealing with the morality of killing.

For Sale
Not that you could miss it on the cover, but Spider-Man and His Amazing Friends debuted around this time. 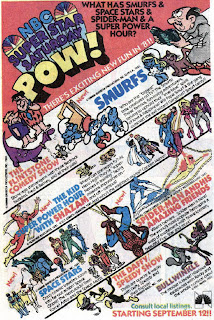 Teebore's Take
In his analysis of this issue, Jason Powell argues that Kitty's dilemma regarding and ultimate rescue of Storm-as-White Queen can be read as an anti-death penalty argument cast in the form of superhero comics: in a world of body-swapping ray guns and whatnot, it's hard to know if the person you're about to kill (or allow to die) is actually that person, just as sentencing someone to death runs the risk of killing a potentially good person. His reading of that scene is, frankly, the best thing to come out this issue, which brings a rushed conclusion to a lackluster story. The only real bit of characterization comes in the opening pages via Kitty's aforementioned dilemma regarding whether or not to save the woman she believes to be the villainous White Queen (and a good follow-up lesson on killing from Wolverine at the end).

Without any other significant character bits to cover for the generic plot, the rest of the issue is rather dull and poorly constructed. The "persona exchange gun" is pure Silver Age gimmickry. I'd call it a MacGuffin, but it barely factors into the plot at all, as the whole White Queen/Storm swap seems to exist for no other reason than "sure, why the hell not?". The Hellfire Club has no clear plan for the captured X-Men (they're going to loot the X-Men's databanks and then imprison them) and are defeated with relative ease. And the plot point which kicked this whole thing off - Kitty transferring to the Massachusetts Academy - is resolved with a hand wave from White Queen, even though she had nothing to do with the transfer in the first place (Kitty's transfer, then, falls somewhere between "massive coincidence" and "dropped plot point"). In short, this issue is rather a mess, and that's without discussing the slightly-better-than-last-issue-but-still-lackluster art. Best to forget this eminently forgettable story and move on.