In a Nutshell
Rogue emerges from the Siege Perilous

Plot
Rogue suddenly emerges from the Siege Perilous, appearing in her old room in the X-Men's former base in Australia. Overhearing a news report about Mystique's death, she calls the X-Men for help,  but quickly realizes that the powers she stole from Ms. Marvel are gone when she leaps out a window and lands at the feet of the Reavers, who have retaken the town. Pierce orders her killed, but suddenly Ms. Marvel appears and attacks the Reavers. In the confusion, Rogue absorbs Gateway's power, enabling her to teleport away. Meanwhile, on the fringes of Shi'ar space, Lila Cheney flees from the Shi'ar Strike Lord, teleporting away before she can be captured. Back on Earth, Rogue arrives in the Savage Land, while Ms. Marvel, who followed her through the portal, ends up on Muir Island to find a captive Polaris and everyone else under the control of the Shadow King. 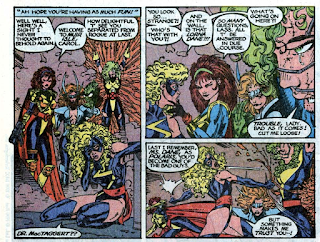 Ms. Marvel resists, but is ultimately taken over by the villain, while Polaris swears vengeance. Later, as Rogue travels the Savage Land looking for help getting home while being observed from afar by a shadowy figure, she is attacked by a decaying Ms. Marvel. With the two in close proximity, Rogue is able to access Ms. Marvel's powers, though she to begins to decay as well. Rogue gains the upper hand but, remembering how she took Ms. Marvel's life once already, refuses to finish her off, giving Ms. Marvel an opening. But as she strangles Rogue, growing stronger, Ms. Marvel is blasted from behind. Later, Rogue awakens in Sauron's old citadel and is told by her rescuer that Ms. Marvel is dead, a necessary act as only one of them could survive. Stepping from the shadows, Magneto says as such, he chose her.

Firsts and Other Notables
This issue marks the return of Rogue, appearing for the first time since getting blasted into the Siege Perilous along with Master Mold/Nimrod in issue #247 (the first member of the team to enter the portal, she is the last to emerge, though we have yet to see the post-Siege Havok). She'll pop up again in issues #274 and #275, and then again during the "Muir Island Saga", but won't officially rejoin the team until the launch of X-Men volume 2.

Which of course also means this is the debut of Jim Lee's version of Rogue, which completes the character's transition from villainous and slightly-older looking in her first appearance... 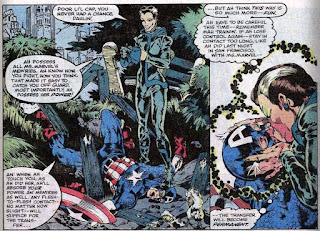 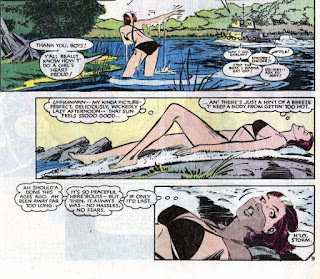 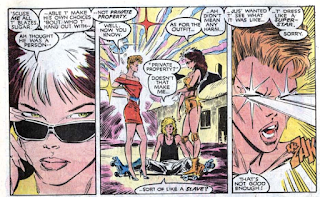 ...to sexiest thanks to Lee. 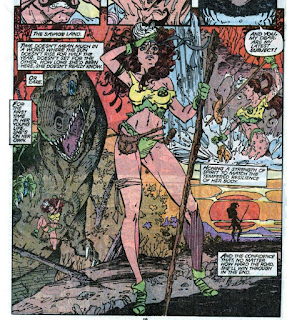 This issue also marks the end of Rogue having to deal with Carol Danvers' memories rattling around in her head (as well as the occasional times when Carol would take control of Rogue's body), as when the Siege Perilous spits her out, she is unchanged save for the remnants of Carol's mind being given a separate, physical form, thus freeing Rogue of sharing her headspace with them.

That physical manifestation of Rogue's stolen Carol memories (the actual Carol Danvers is, at this time, in space with the Starjammers) is then slain by Magneto, who pops up at the end of this issue, his first appearance in the series since issue #253. He claims that of Rogue and the phantom Carol Danvers only one could survive, and he chose Rogue. Issue #274 makes it clear that Magneto was using the machinery in Sauron's citadel at the end of this issue to integrate Rogue and the fake Ms. Marvel's energies, such that Rogue will continue to possess Ms. Marvel's powers moving forward. 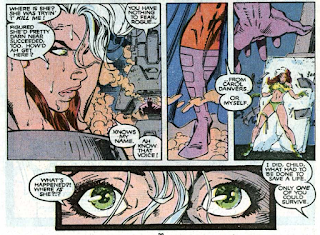 Rogue and Magneto are in the Savage Land by the end of the issue, making it's first appearance in the book since issue #250.

Along with Rogue, Magneto and the Savage Land, the full contingent of the Reavers (not just Pierce and Lady Deathstrike) pop up again, along with the Outback town that served as a base for both them and the X-Men.

The Shi'ar Strike Lord, presumably the same being who defeated the P!yndr champion in issue #265, appears for the first time. He displays psionic abilities once again, and will eventually be revealed to be Professor X (or, at least, a Skrull posing as him). 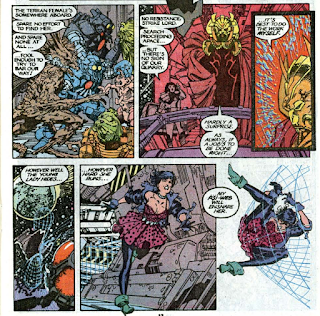 The Shi'ar are pursuing Lila Cheney, who pops up here for the first time since her apparent death in New Mutants #70 (along with a footnote simply saying she didn't die after all in that issue). She'll next appear in issue #273, and serve as the vehicle which connects the X-Men to this Shi'ar subplot. 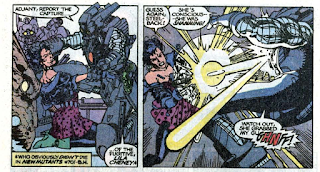 Creator Central
Art Thibert, who will pencil a couple issues of adjectiveless X-Men after Jim Lee leaves for Image and help launch the Cable solo series, fills in on inks this issue.

A Work in Progress
The opening page of this issue effectively serves as a recap of the conclusions of issue #247, Rogue's last appearance in the book.

In the wake of Mystique's apparent death, Val Cooper (who is actually Mystique at this point) appoints Jacob Reisz (who has been taken over by the Shadow King) as her deputy and tasks him with investigating Mystique's murder. 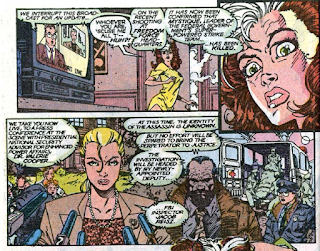 After accepting Pierce's offer to become a cyborg in issue #261, this issue shows Cylla Markham (the pilot hired by Banshee & Forge and seemingly slain by Fenris' blast in issue #260) mid-transformation, and reveals that Pierce is making her into the Skullbuster (who died during the attack on Muir Island in #255). 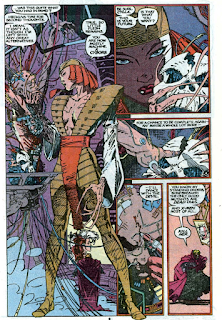 As Rogue takes Gateway's powers and memories, this issue reiterates the notion that Gateway is bound to serve the Reavers by forces outside his control. It also depicts Rogue's skin color changing as a result of taking Gateway's powers, which usually isn't the case (her skin never changed when she absorbed Storm's powers, for example). 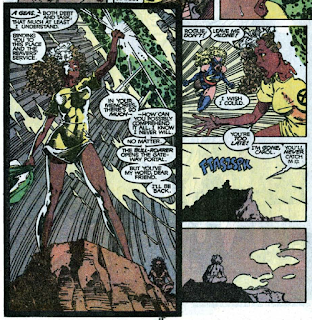 The fake Ms. Marvel ends up on Muir Island, where we see things have gone from bad to worse, and it's confirmed that the Shadow King took control of Legion after the latter used Cerebro to search for the X-Men in issue #259.

In the Savage Land, Rogue finds the X-Men's sigil, left there in annual #12, marking probably the last time that short-lived narrative device is acknowledged. 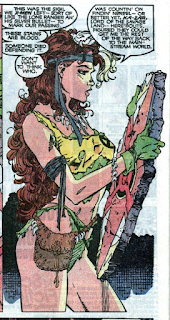 Artistic AchievementsThe final splash page reveal of Magneto represents Jim Lee's contribution to that X-Men tradition,  dating back to issue #17 (Lee has actually collected the original art of such reveals from issues #17, #104, and #111). This is another iconic Lee image that will get used in licensing material and whatnot moving forward. 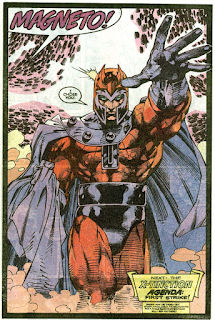 For Sale
There's an ad for Captain Planet and the Planeteers in this issue. 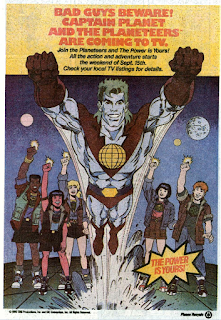 Also, "X-Tinction Agenda", which begins next issue, gets a full page, a modified version of which will serve as the cover to the original trade paperback collection of the story. 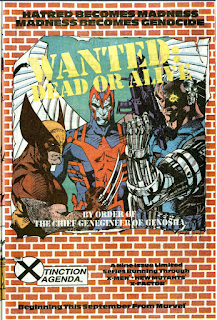 Teebore's Take
In addition to serving as Rogue's reintroduction to the series, this issue also serves as an introduction to Lee's penchant for drawing attractive, scantily clad women, as Rogue spends about half the issue in the tastefully-obscured nude, near-nude, or in a skimpy version of her X-Men costume in the Savage Land. Arguably more important than that, the choice of setting for the back half of this issue's story, the Savage Land, also acts as an introduction to Lee's storytelling sensibilities. A classic element of the series (dating back to its first appearance in issue #10), the Savage Land featured prominently in most of the series' big runs, including the Thomas/Adams one (which also heavily featured Magneto in the Savage Land) and, significantly, the Claremont/Byrne one.

Significant because Lee grew up reading the now-classic Claremont/Byrne issues, and is one of the first creators to come to the book so influenced. As a result, the Savage Land is the first of several classical elements of the series that will begin making its way back into the book, as, reportedly, Lee pushed Claremont to feature the things he enjoyed reading in the series when he was younger. While this (also reportedly) will eventually lead to some friction between the been-there-done-that-want-to-try-something-new Claremont and the let's-cover-the-greatest-hits Lee, it will also drop the book, all too briefly, into a fun middle ground, where the series will reside somewhere between Lee's classicism and Claremont's innovation, hitting the best of both worlds in the process. All that begins here, in an issue which encapsulates the upcoming shift via two different settings, sending Rogue from the recent, more innovative past of the series, the school-less, Xavier-less Outback, to a more classical setting in Magneto and the Savage Land.

Next Issue
Tomorrow, Wolverine (continues to) battles Cable in New Mutants #94. Friday, everyone gets to date except Beast in X-Factor #59. Next week, we look at the first series of Marvel Universe trading cards.