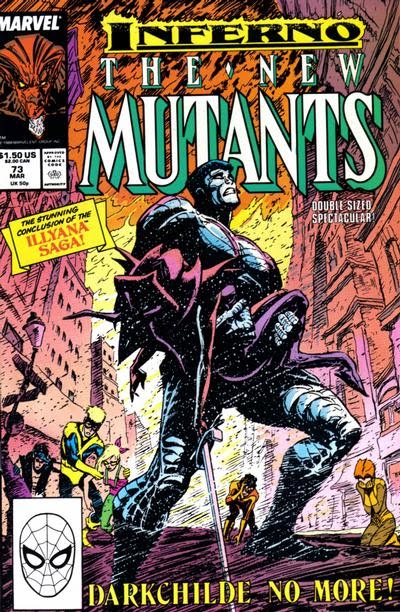 In a Nutshell
Illyana's battle with her dark side comes to an end.

Plot
In the demonically transformed Manhattan, Illyana battles S'ym, quickly realizing she'll need to fully accept her dark side in order to defeat him. Elsewhere, both the New Mutants and Colossus search for Illyana. Atop the roof of the Hellfire Club, N'astirh appears before the Inner Circle, offering an alliance. Passing by, the New Mutants see Magneto conversing with the demon, increasing their distrust in their estranged headmaster. Nearby, Colossus is brought to S'ym, just as the New Mutants spot the effects of his battle with Illyana. The New Mutants manage to separate Illyana from S'ym as Colossus fights the demon himself, and Illyana, distraught over her brother seeing her Darkchilde form, flees to Limbo along with the New Mutants. Once there, she realizes she can no longer run from her destiny and takes her throne, accepting her dark side as ruler of Limbo once more. On Earth, Colossus continues to fight S'ym as Dani, Rusty and Skids defend the kidnapped babies from demon attacks. In Limbo, Rahne rushes off, determined to locate the child Illyana the New Mutants had previously seen running through Limbo. 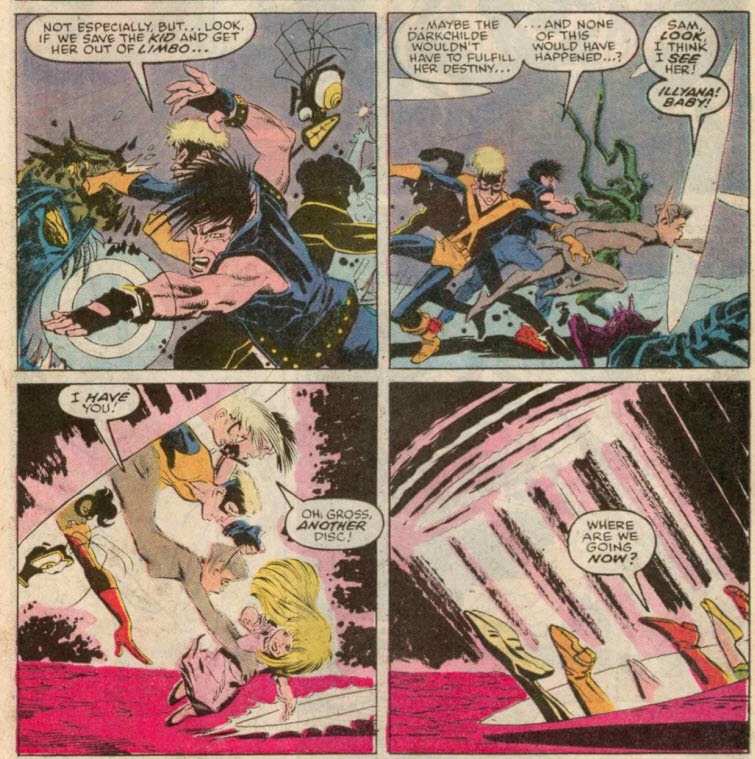 The New Mutants tumble through Limbo's stepping discs until they locate the young girl, at which point the teenaged Illyana appears before them. Enraged at the sight of the young girl whose survival led to her corruption, Illyana transforms once more, into a being of pure energy, and prepares to kill the young girl, but Rahne intervenes, telling her that if they save the child, they could save Illyana as well, that this time she alone has a choice. Saying that in Limbo there is no right choice, Illyana realizes the only way to win is to beat N'astirh at his own game by removing the choice, negating her presence in Limbo. Sending the New Mutants back to Earth, Illyana casts a spell recalling all the demons, including S'ym, to Limbo, then throws aside her Soul Sword. In the wake of the spell, all that remains is Illyana's armor, and, inside it, the young Illyana who fell into Limbo, now free of the place. The New Mutants realize that Illyana sacrificed herself to save the Earth and rescue her younger self from the life she knew. Nearby, N'astirh watches this scene, and in the wake of losing Darkchilde, decides to focus his efforts on the Goblin Queen, determined that before the sun rises, both Earth and Limbo will be his.

Firsts and Other Notables
This issue essentially marks the death of Illyana, at least as we know her, as she sacrifices herself to end the demon attack on Earth and save her past self, leaving the New Mutants with a seven year old Illyana who will be spared a childhood growing up in Limbo. She will shortly be returned to her parents in Russia and largely disappears from the X-universe for awhile, but the happy life the New Mutants envision for her won't come to pass, as she'll eventually contract the Legacy Virus and become one of the disease's first casualties in the early 90s. 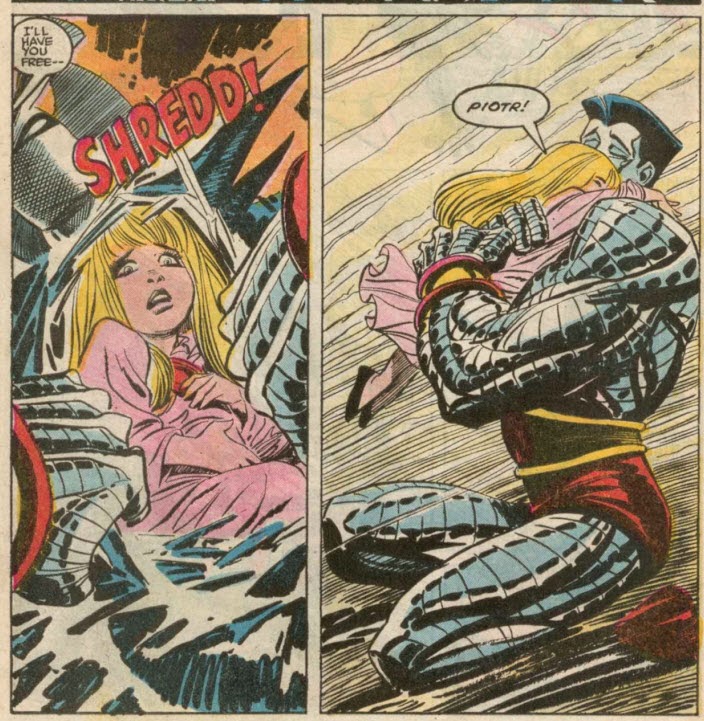 N'astirh approaches the Hellfire Club about an alliance in this issue, and while that in and of itself is ultimately pointless, the New Mutants' observation of their discussion furthers the tension between the team and Magneto, contributing to their upcoming separation. 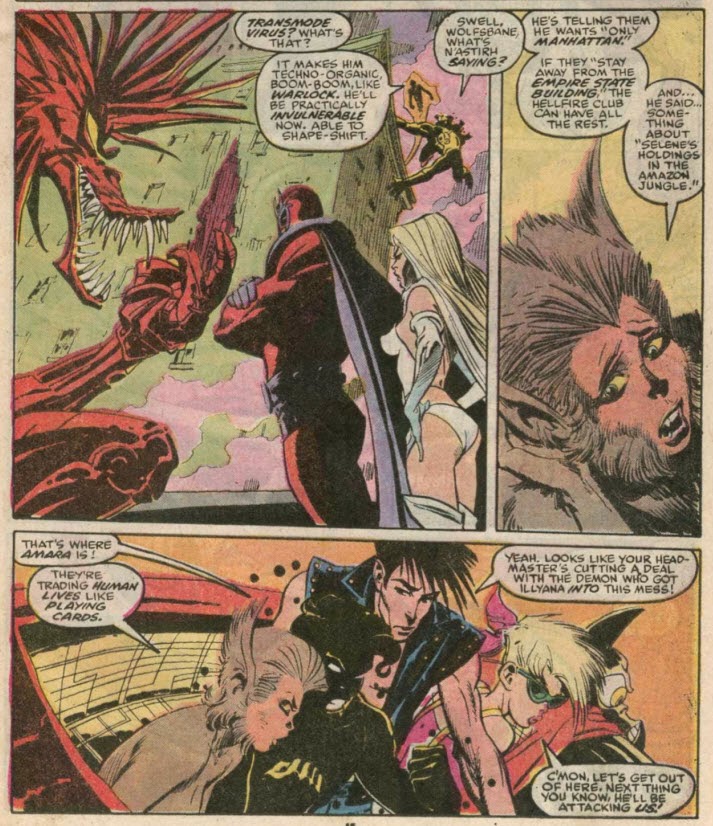 Limbo isn't gone from the X-books entirely, with later stories establishing that S'ym regains control of Limbo in Illyana's absence, before eventually being bested by other rulers to varying levels of success, but this issue marks the end of the New Mutants being heavily involved with Limbo as, in the absence of a teenage Illyana and the end of "Inferno", they no longer have a reason or means to go there. As such, this issue feels a bit like an end of an era for the series, though that is more formally marked in issue #75, when the kids officially sever ties with Magneto and Xavier's School.

Dani is suffering from severe headaches this issue, chalked up to a combination of the concussion she received last issue and the massive death images she's experiencing. The headaches will continue to linger even after "Inferno" ends, eventually leading to the upcoming Asgard story and, ultimately, Dani's departure from the book.

To that end, the group of characters who go after Illyana in this issue (Cannonball, Sunspot, Wolfsbane, Warlock, Boom-Boom and Rictor) are who essentially become the main cast of the series moving forward, at least until it goes into full-on X-Force transition mode. Illyana is gone, Gosamyr will shortly leave for good, and while Rusty and Skids will join the team along with Boom-Boom and Rictor, they won't travel to Asgard with the rest and won't rejoin once the New Mutants, now sans Dani, return to Earth.

Blevins' art seems off this issue (his Colossus in particular is quite wonky); not sure if that's the presence of Manley on inks, or just burnout from pencilling a double sized issue.

The Chronology Corner
This issue takes place before X-Men #242. Though the ramifications of the crossover will linger for several more issues, this is the final New Mutants issue to officially tie-in to "Inferno".

A Work in Progress
The New Mutants mention Professor X, who Rictor and Boom-Boom know as "the old guy who taught X-Factor", while Magneto is to them the bad guy who sank that Russian sub. 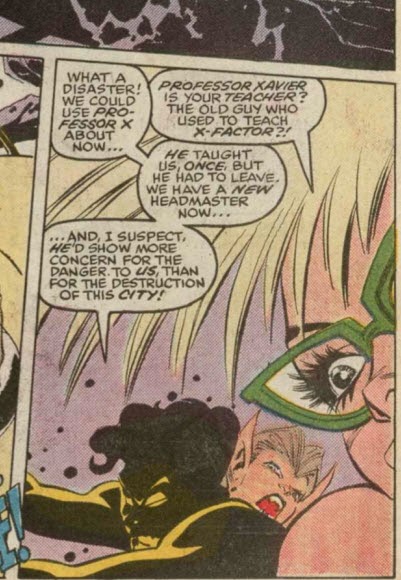 Magneto sees Colossus walking the streets of New York, but chalks it up to a demonic illusion caused by the Inferno. 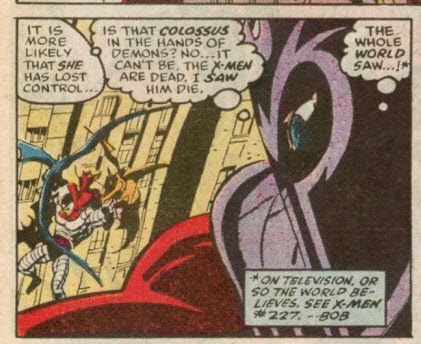 The New Mutants overhear the Hellfire Club discussing Selene's "Amazon holdings", realizing this could mean Amara is in danger.

Colossus tells S'ym he's impervious to the transmode virus; I don't believe that's ever been established before.

Illyana undergoes one final transformation, into a being of pure energy, just before she sacrifices herself.

Most of the demons that have entered Earth are recalled to Limbo by Illyana in this issue, though it will be revealed that some have remained on Earth. 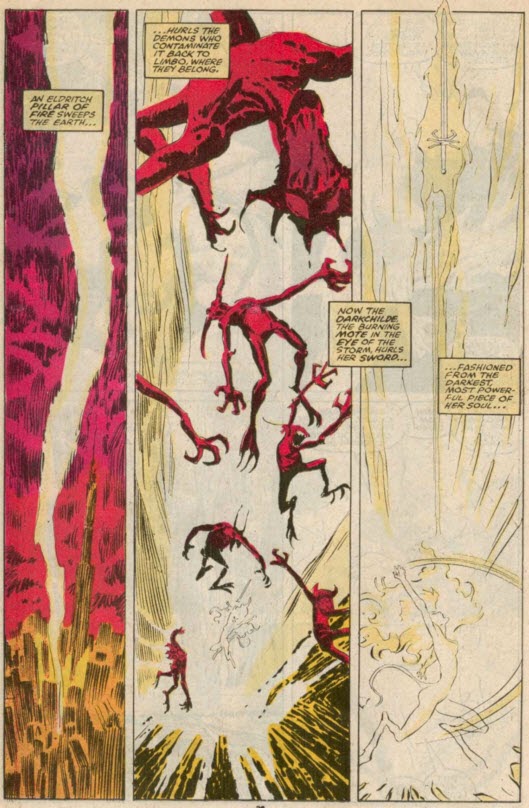 Sam hangs a lampshade on the paradox of Illyana having saved her past self from growing up in Limbo, pointing out that even though Illyana is now a child, they still remember the teenage version, essentially establishing the loophole Weezie left in case anyone wanted to bring the character back. 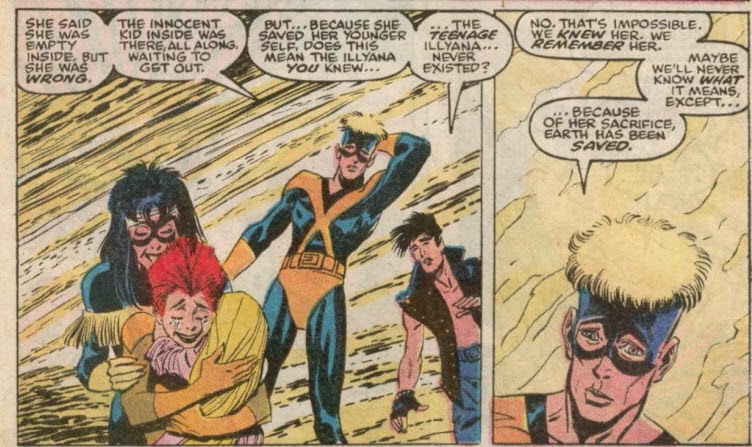 I Love the 80s
Colossus tells a group of demons about his sister, who probably already know all about her, in such a way that if anyone happened to be reading his dialogue, it would helpfully provide details with which they may not be familiar. 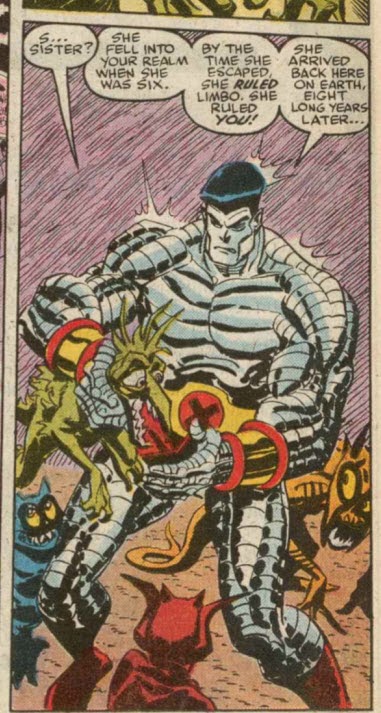 He also has pictures of Illyana on him, which I guess he carries....tucked into his belt?

Teebore's Take
And thus comes to an end the sad but ultimately triumphant saga of Illyana Rasputin, a conclusion which arguably stands as Louise Simonson's swan song on the series. Though she still has a fairly long string to run out before the series is joined and then overtaken by Rob Liefeld en route to its transformation into X-Force, this is the last really significant contribution Simonson will make to the series (barring Cable, but he's tied pretty firmly to Liefeld), and her resolution to Illyana's arc, an arc which stretches all the way back to before this series even existed, is probably her best work on the book.

It's tough to know exactly how Chris Claremont intended to wrap up Illyana's story after he plunged her into Limbo and had her pulled out a grown teenager in X-Men #160, but Simonson's resolution feels appropriately Claremontian, with the better nature of a character leading to a sacrifice in order to defeat her growing darkness, and is certainly in keeping with the direction of the story crafted by her and Claremont in previous issues. While the exact mechanics of what happens are a bit muddied (Illyana rejects the darkness inside her, becomes a Claremontian Child of Light and recalls all the demons from Earth, which kills her/negates her somehow and puts her younger, uncorrupted self in her armor to be found by Colossus and the New Mutants) and the paradoxical implications (if Illyana never become ruler of Limbo, what about all the stuff she did as ruler of Limbo?) are best waved away with "time is funny in Limbo" and/or "alternate Illyana's", the end result is ultimately satisfying.

After years of build-up, Illyana rejects the darkness inside her, and while that's a fairly standard beat for this kind of story, her sacrifice is genuinely surprising, creating a bittersweet ending for the character that is far to uncommon in superhero fiction. Illyana lives, after a fashion, her innocent past self spared the immense torture and abuse our Illyana suffered in Limbo, but in the process, our Illyana, the one we've read and cared about for years, is no more, as much as if the character died fighting a villain. The series, then, has lost one of its more interesting and nuanced characters (and it will suffer for that a bit moving forward), but by giving Illyana a conclusive ending, one which is both tragic and triumphant, it makes her overall story all that much more resonant.