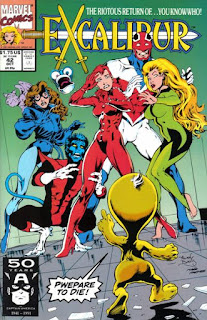 In a Nutshell
Alan Davis returns, and brings Technet with him.

Plot
In Brighton, Gatecrasher crafts an egg which she claims will defeat Excalibur once and for awhile. The next morning, Meggan is making breakfast for Excalibur when alisping-chick named Hard-boiled Henry emerges from one of the eggs, then explodes, damaging the Lighthouse. Technet teleports into the remains, landing atop Excalibur, who are still alive but unconscious. When they wake up, a fight between the two teams breaks out, which stops when Horatio Cringebottom and Bert arrive and freeze Technet in place. They tell Excalibur they've been sent by Saturnyne to remove Widget's ability to travel between dimensions, after which, Cringebottom presents Excalibur with a chip to give Gatecrasher, which should solve their Technet problem. After Technet unfreezes, Captain Britain gives them the chip, which activates a message from Saturnyne rescinding the contract on Phoenix and exiling Technet to Earth-616. Enraged, Technet turns on Gatecrasher, who teleports away, then asks Excalibur to stay in their damaged lighthouse. Meanwhile, on Ee'rath, Kylun slays one of Necrom's druids, then promises the downtrodden townspeople he'll lead them to freedom, and make Excalibur pay for the devastation they've unleashed on the world.

Firsts and Other Notables
This issue marks the return of Alan Davis as the book's penciler, and the start of his run as the book's writer. He'll stick around (with the occasional fill-in) through issue #67. He is joined by inker Mark Farmer (the first time the pair, considered nowadays to be one of the preeminent penciler/inker combos in comics, works together). Initially, Davis was planning on working with Paul Neary as his inker and co-plotted, but their run was delayed by their work on Wolverine: Bloodlust, after which the dollar/pound exchange dropped, making it not worth Neary's time to work on this series. This led to Scott Lobdell fill-in, as Davis agreed to work with Farmer but needed to start over, plot-wise, and wanted to build-up a decent lead time before his first issue was published.

Kylun makes his first appearance this issue - well, technically, his second appearance, as it will later be revealed that Kylun is Colin, the young boy sent to an alternate dimension by Widget in issue #2. This issue shows us that dimension, where Colin has grown up into the sword-wielding Kylun, his mutant powers also giving a cat-like appearance. He will eventually join the team during Davis' run. 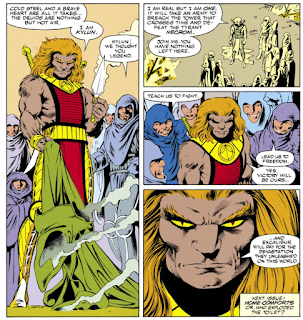 On Kylun's world, people are being subjugated by someone named Necrom; he will turn up as the chief villain of the upcoming storyline.

Saturnyne rescinds the contract she put out in Phoenix this issue, thus eliminating Technet's charge to capture her, bringing to an end a subplot that's been with the series since its very first issue. 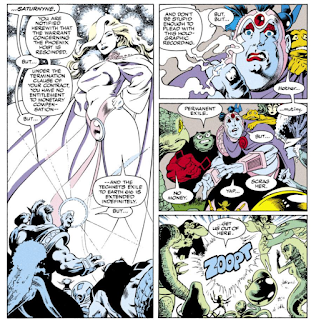 Widget receives modifications this issue to remove his ability to dimension hop. 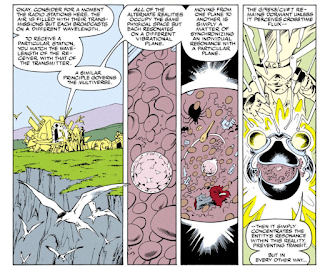 Unable to get paid after being stranded on Earth for months, and now exiled there, Technet turns on Gatecrasher and then, left with nowhere else to go, asks to move into Excalibur's lighthouse in order to effect repairs on it.

Though this isn't the issue that coined the numbering scheme or assigned the "main" Earth its number, I believe this is the first time we've seen it referenced as Earth-616 in an X-book.

Hardboiled Henry, the Tweety-bird-like construct built by Gatecrasher, somewhat astonishingly, appears again after this issue. I don't believe Horatio Cringebottom, the bureaucrat who facilitiates Widget's repair, appears outside this issue. 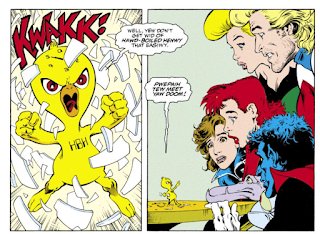 A Work in Progress
The issue opens with Excalibur recovering from a train rescue they participated in between issues, the kind of easy thing that goes a long way towards selling the idea of Excalibur as the British Avengers. 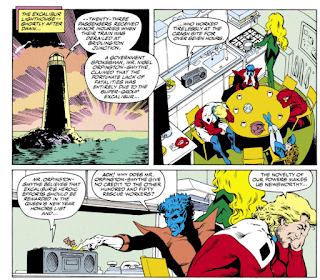 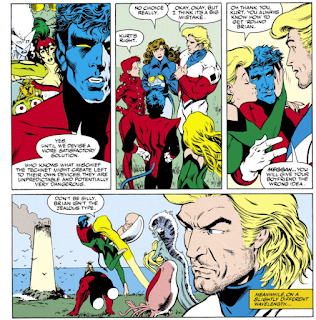 Alan Davis on returning to Excalibur
"I had always wanted to write a comic and Terry Kavanagh offered me Excalibur. I think it's safe to say that at the time he was the only editor who had any confidence that I could do the job - more than I had in myself, in fact. Terry was a great editor who not only supported and encouraged me but also gave me the freedom to experiment and take risks."

Teebore's Take
Where Uncanny X-Men #281 and X-Factor #71 took bold steps forward into something different this month, this issue does almost the opposite: stepping back, albeit to a time of creative consistency and quality, with the return of Alan Davis. Yet, as much as this issue feels like a comforting return to familiarity (and gorgeous, lush art), Davis spends little time before clearing the deck to move the series forward: ending Saturnyne's contract on Phoenix, moving the Gatecrasher-less Technet into Excalibur's lighthouse (I have no idea where that's going, but at least he's doing SOMETHING with Technet), removing Widget's cross-time traveling abilities (which reads very much like an assurance to readers that the series is done with alternate realities for awhile) and setting up future plots in the form of Kylun and his fight against Necrom. It's not the buzzy direction changes other titles are undergoing this month, but this series has languished for so long somewhere between "forgettable" and "competent" that simply having great art and forward narrative momentum again makes this issue feel just as "big" as the other titles.