The Walking Dead 6x12: Not Tomorrow Yet 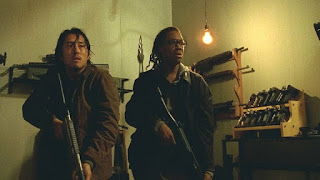 Remember American Pie? That teen sex comedy in the 1990's? It was about four boys who make a pact to have sex by the time they graduate high school. Sex was a rite of passage to them. On the Walking Dead, murder is the rite of passage.

A person's first murder seemed to be a big theme in Not Tomorrow Yet. Alexandria agreed to kill the Saviors for the Hilltop in exchange for food and a cow. Both Glenn and Heath bond over never killing anybody but know that this operation is going to change things.

Morgan, of course, is against this plan and comes up with a completely naïve alternative. He wants to talk to it out. I get and appreciate that Morgan never wants to kill again but he also needs to know when to pick his battles. And if you are going to pick your battles, come up with a better plan than intimidation! Daryl has encountered Negan's crew, he'll tell you how well that plan would go over. I mean, I love Morgan, but in this episode he actually annoyed me more than Carol!

Speaking of Carol, I actually kind of liked her this episode! (Shocking I know.) This episode showed that perhaps she's not a complete sociopath. Not only did she seem to express some remorse over those she has killed but she even defended Morgan's decision not kill. Amazing!

I will say that Carol's overprotective attitude towards Maggie was a little annoying. I understand the reason why but in the zombie apocalypse pregnancy isn't a reason to stay on the sideline. You would think Carol, of all people, would recognize this. And it goes doubly if the pregnant person in question WANTS to help. They end up getting kidnapped but I have no idea if that's because Carol was overprotective, not protective enough or neither.

Anyway, back to the rite of passage. After Negan's compound is infiltrated Glenn finds some sleeping Saviors. Glenn decides to slowly and carefully stab one of the Saviors in the head. The knife goes in easy and effortlessly. That must have been a sharp knife! Now Glenn is a killer.

After that, Glenn does Heath a solid by killing another Savior for him. This is supposed to spare Heath from murdering and whatever soul killing affect that may have on him. But all that is negated when Heath has to kill a few people in the heat of battle later. So it all feels like a waste of time.

Soon Rick and company (with the help of Jesus saving people via magical teleportation) end up with a near complete victory over Negan. They're nearly dead and no casualties were suffered on Rick's side. But we're not done with virgin killers having their first time yet! We still have Father Gabriel, of course!

Father Gabriel comes across an injured, defenseless Savior and then guns him down. I'm not necessarily saying he did the wrong thing but there certainly was the feeling that he didn't have to do it. He could've just tied the Savior up or something? It was definitely more of an execution than self-defense and while that wouldn't surprise me if it was Carol or Rick or Daryl, but coming from a person who has never killed? From a priest no less!? It just made it feel like Father Gabriel REALLY wanted induction into the murder club. It's like sleeping with a person you have zero interest in just so you'll no longer be a virgin. That's a no-win situation (despite how horrible the boys in American Pie think being a virgin is).

Other Thoughts:
I should also note that American Pie has four boys video a naked girl without her permission, distribute that video and then the girl gets deported for it. (The latter of that happened as an off-handed comment met with zero empathy by the protagonists.) Wait, protagonists acting like antagonists? Maybe there are more parallels between The Walking Dead and American Pie than I thought!

So Carol seems to be having a change of heart. What was the cause? Does she feel responsible for Sam's death?

How did Carol perfect her acorn cookies? How much food was wasted in the experimentation process?

Rick won't tell Sasha about what's going on with Hilltop but he'll tell Carol, because she's one of the cool kids!

So what's the book with numbers Carol is writing in? Is it a log of the number of people she has killed?

Morgan is in an odd ethical position. He refuses to kill, but is it alright for him to live in a city that kills...a lot?

Is this guy Carol is taking a shining to somebody I should know?

Rosita seems like a cool woman. What's Abraham's problem? And even if he does want to break up with her, no need to be such a dick about it!

Throughout this entire series Glenn has never killed anyone? Seriously?

So when they got the fake-zombie-Gregory-head Rick punches it to make it look more deformed. The Hilltop people think this is much more hardcore than I do.

Any time I see a facility with lights I wonder how they're powering it.

Would the Savior guards even know what Gregory looks like?

So, is that red headed lady at the end Negan?
Newer Post Older Post Home
Posted by Dr. Bitz at 1:17 AM