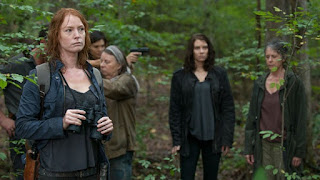 "You're not the good guys."

This is what Michelle of the Saviors tells Maggie as she was interrogating her. It is a reminder that we are all the heroes of our own stories. It's also a reminder that sometimes (especially in nihilistic fiction) protagonists and antagonists have more to do with familiarity than actions. It's the people we follow for longer and spend more time with that we end up rooting for. We root against unfamiliar new comers even if they're not that different from the people we are rooting for.

The Same Boat really focused on the differences, or lack thereof, between the Saviors are from Rick's group. When thinking about whether or not the Saviors are truly worse than Rick's group, the scene I keep going back to is the motorcyclists who stopped Daryl, Sasha and Abraham and tried to steal their things. They were even going to kill one of them for no real good reason. This was definitely worse than anything I can recall Rick's group trying to do. But only slightly. And later in the episode we learn that these motorcyclists' antics may not have been sanctioned.

Beyond the scene where the Saviors get rocket launchered, we really don't know much about the Saviors. They like to take what they want but is that too different than Rick and company? Rick made it very clear that if Alexandria tried to kick them out they'd take it by force. One of the only reasons we root for Rick and company is the fact that they're the ones we've been following since the beginning of the series.

The most obvious example of the similarity between Rick's group and the Saviors is looking at Paula and Carol. Maggie and Carol are kidnapped by the Saviors (mainly Paula) but aren't killed because Rick's group have also taken Primo, the Savior's medic, hostage. As we spend more time with Paula we realize she's pretty much Carol before two episodes ago. That's what make this encounter interesting.

Carol used to be one of the most sociopathic members of Rick's crew. She seems to be changing but she then comes face to face with who she used to be. Carol sees the obvious parallels between her and Paula too. After Paula makes a grand speech about her past secretary life and how she's changed and learned to kill to ensure her own survival, the parallels are obvious to the audience too.

After being kidnapped Carol puts on the scared housewife act to get the Saviors to underestimate her. It works because everyone always buys it. Soon enough Carol frees herself as well as Maggie and they make quick work of the Saviors. Carol isn't happy she did what she felt she had too but all of us viewers are glad to see Rick's group come out on top..and with no fatalities! Yay! Then again, if we had spent more time with the Saviors, maybe we would have felt the complete opposite.

Other Thoughts:
Remember the Wolves? They sure were a group of people...

I'm not sure the first person point of view shot with Maggie being kidnapped and taken to their base was as artful as the show wanted it to be.

Was Carol actually panicking or was that part of her plan?

If I was pregnant in the zombie apocalypse I'm not sure a few puffs of secondhand smoke would be on my list of top 50 things to worry about.

I was going to remind people that being unconscious for more than a couple minutes means that severe brain damage will likely occur but the show was one step ahead of me and had the guy end up dying.

While Maggie and Carol were escaping I kept thinking that there was no way it was going to be that easy. It ended up being that easy.

We are all Negan? What does that mean?

Did Carol hesitate to shoot Paula because she's starting to become averse to killing or because she saw too much of herself in Paula?

So Rick offs Primo just on his word that he's Negan. Maybe some more inquiries and questioning was in order? I doubt Primo was Negan, but was Paula? Is there an actual person named Negan? Maybe keeping Primo alive and interrogating him could've shed some light on all of this.

Was this the end of the Saviors? I know there was talk of reinforcements arriving but how many? Are there still a lot more of them or was pretty much the end?
Newer Post Older Post Home
Posted by Dr. Bitz at 2:34 AM