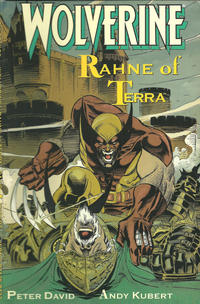 In a Nutshell
Wolverine & Wolfsbane get transported to a medieval fantasy dimension.

Plot
The New Mutants are worried about Rahne, who has suddenly gone mad, raving that she's a princess. On another world, a bloodthirsty Wolverine attacks the Mage, while at the nearby castle, Princess Rain's servant Tabby worries about the prophecy saying a beast will kill her on her nearing birthday. Briefly, Rain sees her guards as the New Mutants. Outside, Wolverine attacks one of the guards, Samuel, who races back to the castle to warn of the beast's approach. Shortly thereafter, the elderly king, Rain's father, dies, Elsewhere, Magnus reveals he's brought Wolverine to his world to fulfill the prophecy, then brainwashes him again. Over the objections of her guards, Rain sneaks out to attend her fathers funeral, encountering a familiar-seeming peasant named Doug along the way. At the cemetery, Wolverine attacks, but Rain transforms into a werewolf, driving him off, before fleeing to the castle. 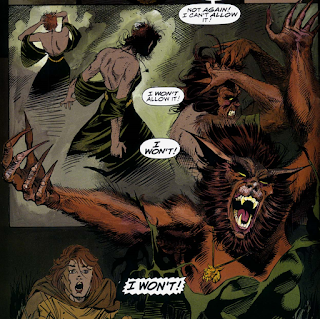 Wolverine tracks her there, but Tabby lights him on fire, and his healing factor restores his senses. Just then, Magnus arrives, growing to enormous size and trying to crush Rain, but Wolverine leaps into his ear and destroys his brain. Suddenly, Wolverine is returned home, and the Mage explains that Rain is Rahne; he switched the two and brainwashed Rahne into believing she was the princess (with the princess residing on Wolverine's Earth) in order to stymie the prophecy of her death, He then returns both girls to their home worlds. The New Mutants find it hard to believe Rahne's story of what happened to her, but Wolverine turns up, assuring them its all true.

Firsts and Other Notables
This issue introduces the alternate reality of Geshem (eventually designated Earth-1991), a vaguely-medieval/steampunk world in which Wolfsbane is a princess, the New Mutants her royal guards, and Cable a mage (with Warlock as his staff). Outside of this issue and a 1995 sequel, I don't believe the world, or any of its character, have made any other appearances.

The peasant boy who befriends Rahne in Geshem is named Doug, and is clearly meant to be the Geshem analogue to Doug Ramsey. 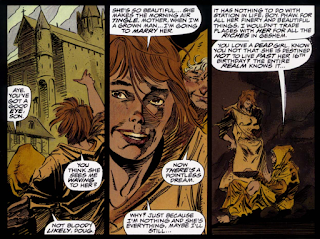 Meanwhile, the villain of the story is the Geshem version of Magneto, called Magnus. 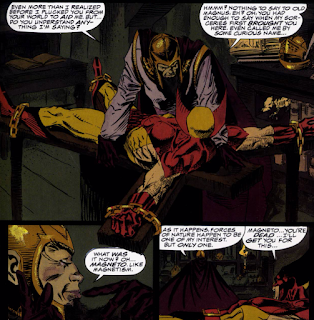 It is said that Wolverine is unique to his own dimension (like what Claremont tried to establish about Rachel Summers, presumably), but while there may be no Wolverine analogue in Geshem, we know that alternate reality versions of the character do in fact exist. 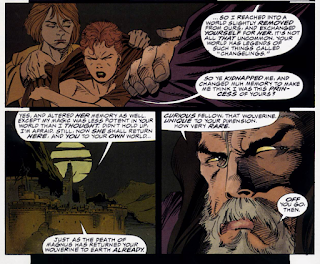 This is a square-bound, double-sized issue that cost $5.95; I believe it is considered the Wolverine annual for 1991, the third such for the series (after The Jungle Adventure and Bloodlust).

Creator Central
X-Factor writer Peter David writes this issue, while future X-Men penciller Andy Kubert draws (presumably, this was done around the time he was getting fill-in work around the X-office).

The Chronology Corner
Though published in 1991, this issue takes place just prior to the New Mutants' adventure in Madripoor in New Mutants #93 (Warlock doesn't appear in the non-Terra part of the issue, but an un-mutated Rahne does), while Wolverine appears between Uncanny X-Men #268 and that issue.

A Work in Progress
There's a nice exchange between Cable and Sunspot that shows off Cable's teaching style more effectively than anything we saw in New Mutants. 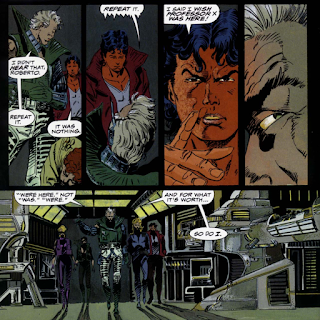 That said, the New Mutants are pretty useless in this issue, essentially standing around waiting for Rahne to get better, despite their experiences with similar things, or the resources at their disposal (X-Factor, at the very least, since this is before the X-Force split).

Pun with Peter!
The title of this issue, a play on the phrase "reign of terror", is an example of David's predilection for puns, particular ones that exist only for their own sake (since the term "Terra" for Earth isn't really used much in the story).

Similarly, "Geshem" is a Hebrew word for "rain", making it part of the pun as well.

At one point, characters paraphrase a line from the song "I Can See Clearly Now". 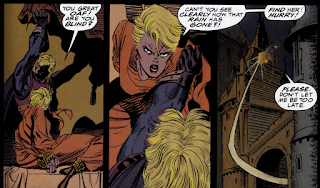 Finally, the bewitched Wolverine keeps repeating "I'm the beast", until he realizes he's actually "the best" ie "the best there is at what he does". 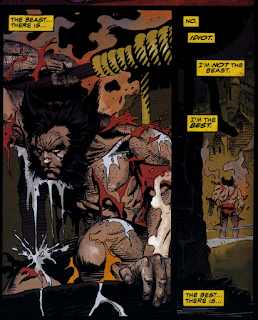 Austin's Analysis
While Andy Kubert is no Art Adams and Peter David no Chris Claremont (though I do like both David & Kubert plenty), this nevertheless reminds me a lot of New Mutants Special Edition #1, just for the way it drops the New Mutants into a quasi-medieval world laced with fantasy elements. It is, despite the title, truly a New Mutants story - Wolverine appears in it, but pretty much just as a possessed foil for the protagonists, and we only see the "real" (that is, un-bewitched) Wolverine very briefly, despite headlining the issue. It may just be my lingering affection for the New Mutants, specifically the post-Cable pre-X-Force iteration of the team featured here that we saw so little of in their own series, but I enjoyed this. It's not required reading (I'd never read it prior to reading it for this review, and I certainly never felt like I missing something as a result), nor is it objectively all that good (David's script is pretty mundane, outside of the pointless puns, while Kubert's work, reminiscent at times of his later work on 1602, is let down by some muddy coloring), but it is more enjoyable and pleasantly-different than the usual neo-noir, Wolverine-fighting-to-control-some-aspect-of-his-animal-nature stories that seem to already litter these kinds of already-numerous one-shots and special issues.

Next Issue
Next week: the debut of Bishop in Uncanny X-Men #282, more sideways "fun" in X-Force #4, and the mystery of Madrox's murder in X-Factor #72.
Newer Post Older Post Home
Posted by Austin Gorton at 12:00 PM