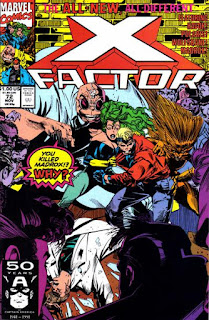 In a Nutshell
X-Factor formally debuts, along with new uniforms and a codename for Guido.

Plot
Val learns about Madrox's death from the news, then teleports via Lockjaw with Quicksilver to Guido's home, where Alex, Lorna and Rahne are staying. Together, the group teleports to the scene of the murder, and identify the body as Jamie's, just as Jamie himself turns up, alive and well. Meanwhile, Professor Vic Chalker is watching the news, disgusted at the sight of all the mutants. Back at the crime scene, Jamie explains that he was suspicious when someone knocked at his door, so he created a duplicate to answer it, and it is that dupe that was killed. But when Jamie tries to reabsorb it, he can't, which freaks him out. Two shadowy figures watch the entire scene unfold on the news, with one counseling patience to the other. Later, back at X-Factor's headquarters, Val announces that she's organized a press conference to formally debut X-Factor. Alex and Lorna go for a walk, discussing their relationship, and end up helping rescue a family from a burning building. Later, at the press conference, X-Factor is unveiled to the media, and Guido takes the codename Strong Guy. As they take questions from the audience, a man who looks like Jamie steps forward, claiming he's the real Multiple Man and the one on stage is an imposter.

Firsts and Other Notables
X-Factor's existence as a government-backed mutant team, the successor to Freedom Force, is announced to the public this issue, and their new team uniforms are unveiled for the first time as well (in general, I find them a little busy in places, but for the most part, I like them, particularly the fact that they look more like uniforms and less like traditional superhero costumes). 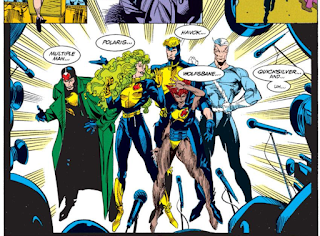 It's noted that Quicksilver is not wearing an X-Factor uniform, something that becomes something of a running gag/concern going forward, both in-universe and in the book's letters pages. I've never actually heard an explanation as to WHY David and Stroman don't put Quicksilver into a team uniform, but he will don one eventually (after both David and Stroman are gone from the series).

In addition to the new costumes, Guido adopts his codename this issue: Strong Guy, a name hilariously straight-forward, prompted by a knowing attendee of the conference. Havok objects, but the moniker will stick. 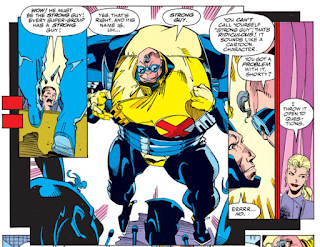 After revealing that the Madrox who was shot at the end of last issue was a dupe, this issue concludes with another (living) Madrox emerging from the press conference crowd claiming he's the real Madrox and the one on stage is an imposter. We'll eventually learn this is a rogue dupe, and is actually the same one who participated in Fallen Angels (unbeknownst to anyone), who will serve as one of the villains in this initial story arc. 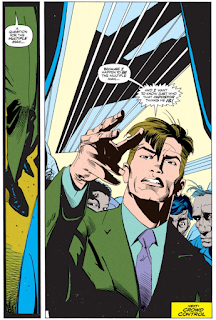 In addition to the second Madrox, there's a brief scene in which two individuals discuss their attack on X-Factor (specifically referencing the change to Quicksilver's power that brought him to the team last issue). We don't see who they are, but we'll eventually learn they are Mr. Sinister and Ricochet, a US senator with the mutant power to turn other mutants' powers against them. The Madrox dupe is working for/with them throughout this story. 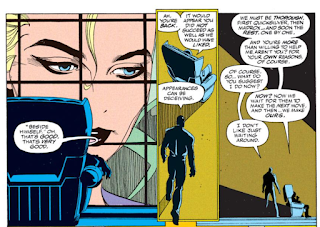 Vic Chalker makes his first appearance, kicking off a running subplot/gag involving the Chalker brothers, mutant-hating would-be super-villains, each of whom ends up meeting a stupid and/or ironic end before they get a chance to strike at X-Factor. Eventually, the plot gets paid off when the three get resurrected to fight X-Factor as part of another villain's plan in an upcoming annual. 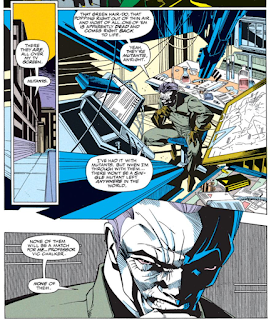 The corner box gets updated to reflect the new team this issue, though unlike the usual static head shots, this grouping is more of team shot (not unlike the previous image used for the original team in that way).

A Work in Progress
We find out the family that owns the condo where Jamie is staying are the Rosenfelds, though it's still unclear when, having lived most of his life in either isolation or on Muir Island, he would have become friends with them.

Guido details a little bit about his background, all of which is original to this issue: his parents were spendthrifts who urged Guido to watch his money carefully. Instead, they had the opposite effect on him, and when they died and he received a large settlement, he developed a taste for the finer things in life. After some bad investments wiped him out, he took the job bodyguarding Lila Cheney (where he was when he first appeared). 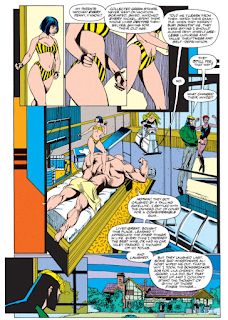 He says that job with Lila dried up, which reminds me that we haven't seen Lila since she teleported the X-Men back to Earth after Uncanny #277.

Polaris seems the most affected by Madrox's apparent death, which makes sense, given that of all the members of the team, she's spent the most time with him (albeit a large chunk of that time was while both were under the Shadow King's control).

Madrox is shocked when he is unable to absorb his murdered dupe, saying he's never been unable to do that before. This leads to him being wracked with doubt as he ponders whether or not his duplicates are sentient beings with their own souls, rather than just extensions of himself, as he always believed (these are all ideas Peter David will explore in more detail during his second run on X-Factor, when Madrox is the central character, and we'll learn that his dupes are capable of carving out unique, individualistic lives for themselves). 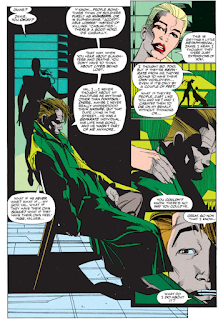 The Reference Section
I'm pretty sure Stroman drew himself into this issue as a cop. 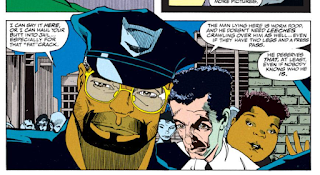 The Grim 'n' Gritty 90s
The secret villain behind the attacks on Quicksilver and Madrox advises his accomplice to not have a cow. 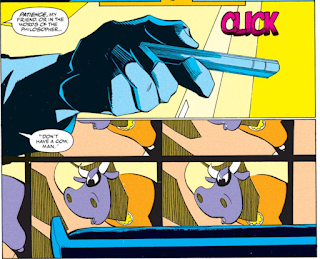 Pun with Peter
Upon hearing about Madrox's apparent death on the news, Quicksilver remarks that it must have been a slow news night. 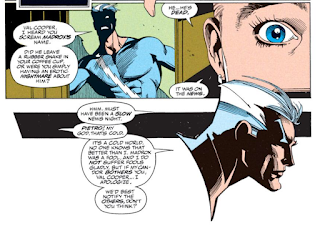 Havok has a snarky response for the cop who questions him after he identifies Madrox's body.

After Madrox freaks out over his inability to reabsorb his dead dupe, a reporter describes him as being hysterical. Val responds he was simply beside himself *rimshot*. 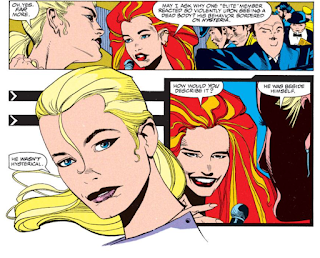 While rescuing people from a burning building, Havok is asked if he's an angel. He responds that he's an Expo (which is kind of random; of all the baseball teams to respond with, why that one?). 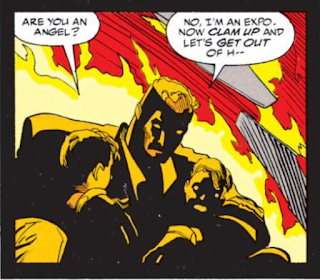 Artistic Achievements
Stroman has a tendency to draw an assortment of odd looking and attired people into background scenes throughout his run on this book. I have no idea if anyone of them are meant to be specific people, or if it's just something he does for fun. 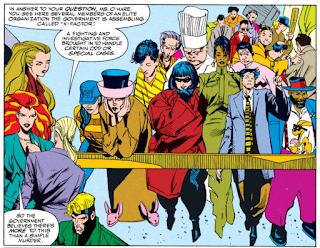 Young Love
Havok and Polaris, acknowledging all the crap they've gone through since they were last together, decide to start over with each other, then bond over a successful bit of shared superheroism that illustrated the trust they still have for one another. We also learn their favorite authors and movies (and David sneaks in a joke about how Inherit the Wind is the sequel to Gone with the Wind). 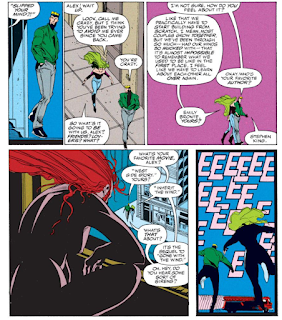 This rekindling of their relationship does not sit well with a watching Rahne, continuing that love triangle. 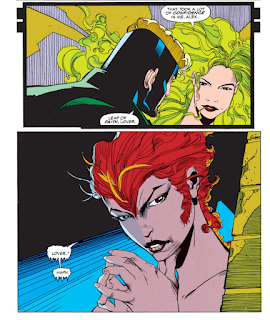 Later, Rahne responds to a reporter rightly pointing out that mutants seem to have a knack for coming back from the dead by angrily telling him her first love remains dead, a reference to Doug Ramsey. Though of course, he's just dead NOW. He'll be back too, eventually.

Austin's Analysis
Picking up where the first issue left off, Peter David continues a strong showing, striking the right balance between plot, subplot, characterization and action. In addition to the formal introduction of the new X-Factor (and their uniforms) and the payoff to last issue's Madrox murder cliffhanger, we get more character development, chiefly in the area of Havok and Polaris' relationship (acknowledging somewhat all the weird shit the pair have been through over the years), but Guido also gets some backstory for the first time ever. And then it ends with a nice bookend to the previous issue: where that concluded with the shocking (apparent) death of a Madrox, this one ends with another Madrox showing up, claiming he's the real deal. Best of all, on top of all that, this issue is genuinely funny, even moreso than the previous one. Not just amusing or wry (like many early Excalibur issues), but legitimately sitcom-like humor, alongside the usual Peter David groaners, that doesn't distract from the more serious subject matter of the plot. It's a tricky tightrope to walk, but so far, David is walking it well.