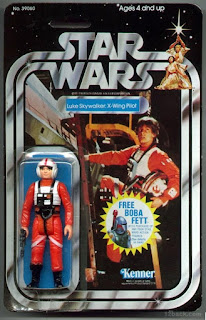 The second wave of figures released under the Star Wars banner, first on sale in late 1978, could be called "the alien wave", as it sees the releases of four notable aliens from the famous cantina scene: Greedo, Hammerhead (later named Momaw Nadon), Snaggletooth (aka Zutton) and Walrus Man (aka Ponda Baba, the alien whom accosted Luke and got his arm sliced off by Obi-Wan for his troubles). For the most part, aside from their heads, the figures don't really resemble their onscreen counterparts, due to a combination of sculpting limitations and a lack of visual reference material;, if part of a creature's body wasn't seen on screen, George Lucas and his team didn't bother designing a look or costume for that part, and most of the reference material given to Kenner for the figures were simply headshots of the aliens, usually in black-and-white.

This led to a curious sequence of events in the case of the Snaggletooth figure, one of the more well-known stories among action figure collectors, which resulted in the creation of one of the line's more famous and sought-after figures on the collectors market. When Kenner set about designing the Snaggletooth figure, they put him in a blue jumpsuit (the reference photo was B&W) with silver boots, and made the figure the same size as the rest of their figures (the photo was only a headshot). However, when LucasFilm saw the figure, they explained that Snaggletooth was in fact much shorter than the rest of the aliens, and wore a red jumpsuit, not blue, with exposed feet. So Kenner designed a second Snaggletooth figure, one about waist high relative to the other figures, colored red and with exposed, furry feet. 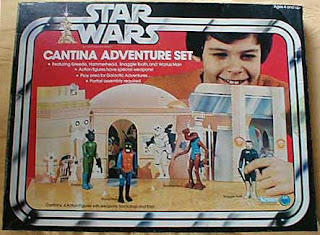 The initial blue Snaggletooth was available only via the Sear's Christmas wish book in 1978, packaged with the other three cantina aliens as part of the Cantina Adventure Set (essentially a chipboard backdrop of the cantina along with the four figures) or in a two-pack with Greedo. It was never carded, or released wide, outside of the Sear's catalog (instead, the red Snaggletooth got carded and put into stores across the country). As a result, it remains one of the more sough-after and expensive Star Wars action figures on the collectors' market, due to its low production run and the circumstances of its creation. 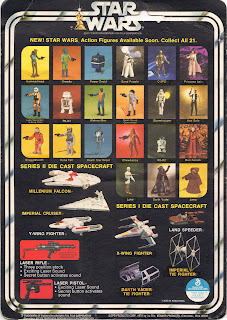 (Blue Snaggletooth's story doesn't end there: when LucasFilm was making the infamous Star Wars Holiday Special, they reused a number of costumes and masks from the initial film, including Snaggletooth's; however, it was decided to put the mask on a full-size actor. The red costume was kept the same, but the character was given a belt buckle which matched the one Kenner designed for Blue Snaggletooth, making that figure the only one to inform a costume design, instead of the other way around. And the full-sized Blue Snaggletooth, originally just, essentially, an error in production design, lives on as a character in his own right, receiving a figure in the later revived action figure line, and appearing in an episode of The Clone Wars).

Beyond the aliens, this wave also includes in R5-D4 (the red Artoo-like droid whom Uncle Owen originally purchased from the Jawas) and the Death Star droid a sort of twisted reflection of the earlier wave's Artoo/Threepio pairing, along with the box-like Power Droid, known for the "gonk" sound it makes while walking on its two stubby legs. In the X-Wing Pilot Luke figure, it has the series' first "main character in a different costume" figure, a technique that will enable Kenner to sell multiple versions of the most popular characters, and constantly refresh the line with new Lukes, Hans, and Leias (and to a lesser extent, Chewies, Artoos, Threepios and Landos). 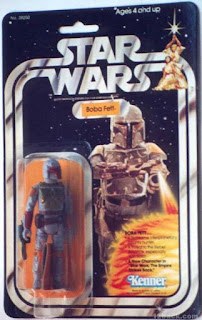 And then there's Boba Fett, who in this incarnation is arguably the single most famous of the vintage Star Wars action figures. While the figure would eventually be sold carded, the initial Boba Fett figure was exclusively mail-away, a clever way for Kenner to goose sales of the figures, as kids had to send in multiple "proofs of purchase", cut from the cardbacks of other figures, along with shipping and handling money, to receive the figure. Advertised as being a new character from the upcoming Star Wars sequel (it still hadn't been named The Empire Strikes Back) and featuring a missile-firing backpack, when the figure arrived in the mail, the missile was glued firmly in the backpack, which, according to an included note, was done in the name of safety.

Purportedly, the removal of the missile-firing action feature was done as a result of Mattel's missile-firing Battlestar Galactica Colonial Viper vehicle, which resulted in the death of one child and injuries to ten more, prompting a recall of approximately two million of the toys. This led Kenner to modify Boba Fett's backpack, which has in turn created something of a holy grail for Star Wars action figure collectors: an original, vintage, Boba Fett with working missile-fire action. No such figures are believed to ever been sold to the public, but some reportedly exist on the secondary market, either pre-production pieces sold off by Kenner employees, or fan-made reproductions. Even without a working action figure, vintage Boba Fetts remain some of the most valuable Star Wars figures, with mint-on-card figures appearing on Star Wars cardbacks (the rarest such version of the figure, since the time between the end of the mailaway promotion and the release of Empire cardbacks was so limited) valued in the thousands.
Newer Post Older Post Home
Posted by Austin Gorton at 12:00 PM