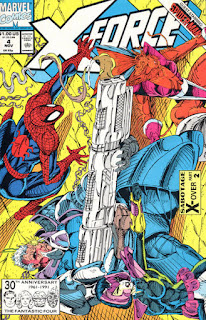 Plot
Spider-Man and X-Force fight Juggernaut, while in the tower above, Cable tracks down Black Tom. They each fire at the other, with Black Tom getting blasted into an open elevator shaft. Clinging on for life, he surrenders to Cable, but Cable shoots him instead, sending him plummeting down the shaft, where he's teleported away by Deadpool, on orders from Mr. Tolliver. On the street below, GW Bridge and SHIELD arrive on the scene just as X-Force is able to remove Juggernaut's helmet. Cable then joins them, declaring he's going to finish Juggernaut once and for all. But before he can, Deadpool pops in and teleports away with Juggernaut as well, leaving X-Force face-to-face with Bridge, who formally announces that Cable is under arrest. Cable responds by teleporting the team back to their ship, As they fly home, Cannonball asks Cable what Bridge has against him, and Cable responds that he wishes he knew.

Firsts and Other Notables
"Sabotage" comes to a close this issue (labeled part two even though it's really more like part three), with Black Tom and Juggernaut whisked away by Deadpool (on orders from Mr. Tolliver) before X-Force gets a chance to do anything lasting to either (or even bring them to justice for the massive terrorist bombing they perpetrated. Both will appear again next issue, Black Tom not again until Deadpool's limited series (Juggernaut appears there, as well as some other places, between now and then). 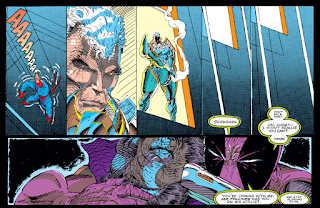 Mike Mignola contributes a pinup to this issue, and it's easily the best looking thing in it. 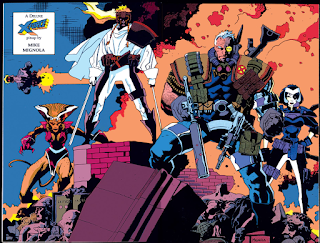 A Work in Progress
Warpath, in what, if we're feeling charitable, could be a metatextual bit of commentary on the story, complains about being sick of fighting Juggernaut, which makes sense, given that he's been doing nothing but that for three issues straight (including the Spider-Man chapter). 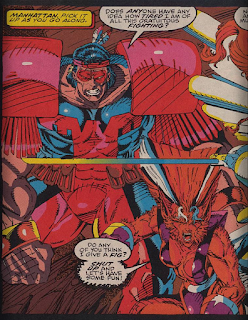 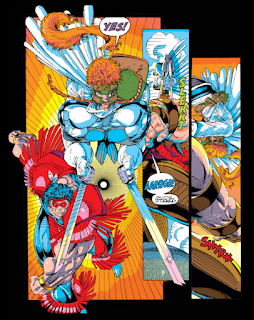 Juggernaut declares that he heals fast, continuing the idea that he can be wounded, however briefly. 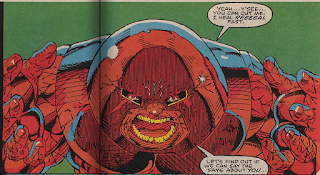 Cannonball and Boom-Boom are absent from this issue; Cable notes that they're helping survivors of the tower explosion (which is a nice bit of scripting, explaining their absence while also acknowledging some of the reprecussions of this kind of attack). Similarly, Sunspot and Gideon have disappeared between Spider-Man #16 and this issue.

We get a little soliloquy from Black Tom explaining his motivations for starting this hostage situation and blowing up one of the towers, but it pretty much falls apart and turns into villain ranting after "to get Juggernaut back".

In a nice acknowledgement of their past together, Juggernaut refers to Siryn as "Theresa" (when Siryn was first introduced, she was working with her uncle and Juggernaut).

Cable erroneously refers to Juggernaut as a mutant; he is not one. 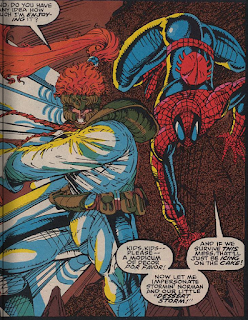 501 Genes
I don't even know what's happening to Spider-Man's fingers in the panel where he's vaulting over Juggernaut. Also, as can be seen in this scan, the web lines on Spider-Man's costume tend to come and go as Rob pleases throughout this issue. 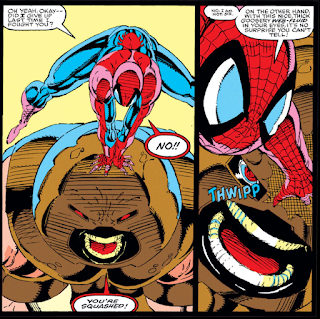 Cable actually gets a moderately funny line when he notes the irony of Black Tom hanging onto an elevator cable for life, except that Liefeld draws Tom hanging onto the edge of the doorway, not a cable. 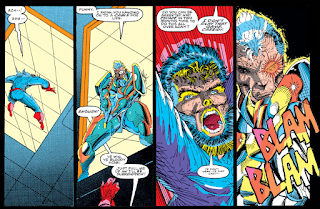 For whatever reason, this panel of Bridge and two random SHIELD agents also struck me as being very proto-Youngblood. 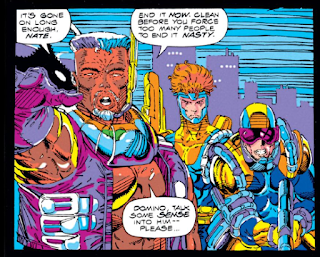 I don't even know where Deadpool is in relation to everyone else - a hole in the ground? 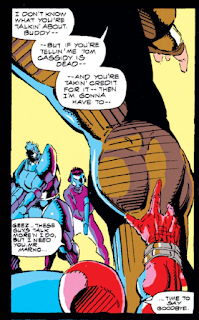 To the EXTREME!
Cable declares that he's not taking Black Tom to prison, that he'll only escape and confront them again, and shoots him point blank, knocking him down an elevator shaft. It's really the first time someone on the team as lived up to the premise of the book, doing something extreme that traditional superheroes wouldn't, but it's mostly undercut by the reveal that Tom survives and is ferreted away by Deadpool.

Austin's Analysis
Well, this story ends mostly as it lived: a lot of nonsensical, repetitive fighting (in which Spider-Man and X-Force rush Juggernaut, and when that doesn't work, try it again) which does nothing with Spider-Man, completely squandering the small bit of potential introduced at the end of the Spider-Man #16, finished off by a deus ex Deadpool-a, as he pops up to teleport Black Tom and Juggernaut away, abruptly ending the story and prompting everyone else to just shrug and go home. As with Spider-Man #16, the sideways gimmick doesn't really add anything, other than to make the whole thing read a lot faster because pretty much every page is a giant splash page.

The one interesting moment is Cable straight-up executing Black Tom, after spouting some more "no more of this traditional letting the bad guy go to prison only to bedevil us again later!" rhetoric, the first time in the series' short history that it actually lives up to its promise to be more extreme and do things differently than a traditional superhero team. But all that is undone by the fact that, while Cable believes he's killed Black Tom, the readers are quickly shown this is not the case. So in the end, all we've got is a rehash of Spider-Man #16 drawn by Rob Liefeld, and one mildly intriguing moment that gets immediately undercut, an unfortunately-perfect example of the style (such as it is) over substance approach that defines the early goings of this title.

Next Issue
Tomorrow, X-Factor makes its official debut in X-Factor #72. Next week, Magneto goes wild in X-Men #2, and hijinks ensure in Excalibur #43.